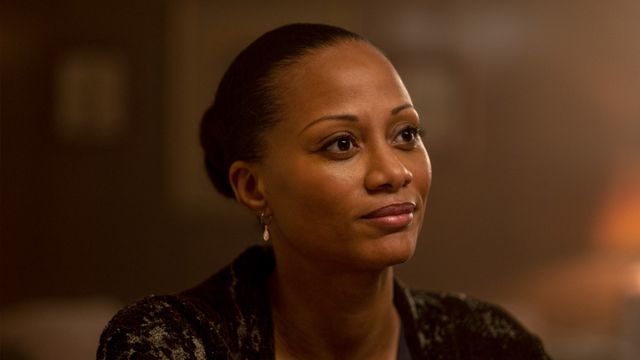 But, amid the wreckage, Rue’s mother Leslie Bennett acts as a constant voice of reason, the calm in the storm. After working two jobs to keep her family afloat while her husband suffered from and ultimately died of cancer, Leslie is left a single mother to two increasingly troubled girls. She is both tough and loving—hugging Rue after she threatens her with a shard of glass in one moment and checking her into rehab after she ODs the next. She yells and grounds and drug tests, but also braids Rue’s hair in a scene of motherly tenderness, gives her romance advice, and tells her to eat some breakfast.

A complex character balancing love for her children with a life full of worry and responsibility, the role of Leslie calls for a damn good actress. Nika King, to be precise.

Long known for career as a comedian, as well as cameos on everything from “NCIS” to “Hannah Montana” and Emmy nominated web series “Funny Married Stuff,” King has taken on the dramatic role with a commitment and vulnerability that is both obvious to the viewer and downright infectious. Recently, I spoke to Nika over the phone about Leslie, Euphoria, and what we all should be learning from the show.

What attracted you to this role in the first place?

Well, I’m just a typical actor and for me it was just a string of auditions and Euphoria happened to be one of those auditions. I think after I read the script, I instinctively knew that this would change my career. My audition went just ok, you know? But after I booked the role and talked with the writer/director Sam [Levinson], he made it very clear that they wanted me for this role.

You say that you saw the script and immediately knew it would change your career. What tipped you off?

The writing was dynamic! It just pulled me in. So many characters were introduced in the pilot, and I’m like—what? I wanted to know each character’s backstory. How is this person going to end up or how is this story going to evolve? And ultimately, I think we see that in season one. I know that I watch it every week and I’m like, oh my gosh. I’ve read the script and I was at the table read, but I’m always intrigued and pulled in by the storytelling. Sam does an awesome job on-page as well as on screen.

Leslie is a really powerful character—working two jobs while her husband is sick, raising two daughters on her own, keeping troubled girls on the straight-and-narrow—how do you go about showing that serious, badass energy while still conveying so much love for your children?

I think I pull from the women in my life, specifically my mom. Seeing how she raised six kids on her own and had to have that balance between love and toughness. At the end of the day, you know what’s best for your kids but at the same time you have to let them go down their own paths. I don’t have kids, so I developed her by looking at women who have had to raise kids by themselves or deal with some type of addiction. She’s this vulnerable but also badass woman who’s like look, I need to make sure my kids understand that I love them, but at the same time put my foot down.

Do you feel like you’ve learned anything from playing this character that you’ve brought into your own life?

Oh, yeah. Anytime you take on roles like this that don’t directly correlate with your life, you have an epiphany or a moment of discovery within yourself. For me, I learned the vulnerability it takes to put it all out on the table and at the same time know that Leslie’s story is someone’s story.

What is something that you want viewers to learn from her?

I want people to see this show as a beacon of light. It’s a lot going on, it’s a lot of hard issues coming at you, but ultimately, I want people to take away that there’s hope. There’s hope on the other side of that trauma, that addiction, that domestic violence. I know it’s tough to see that when you’re going through it, but I personally experienced it that things do get better.

On the surface Euphoria is a teen show, but you’re talking about it on a broader scale and how it might apply to a wide range of people. Who do you think the audience for the show should be? Is it just teens or is it more?

Everybody! Everybody should be watching! All the eyeballs on Euphoria, because it’s not just a teen story. It’s about family. It’s about growing pains. It’s about addiction. Every subject is touched upon, every person willing to explore it can learn from it. We’ve all been teenagers, so we all can relate to something these characters are going through. So, it’s not just a teen drama, it’s an everybody drama, because at the end of the day everyone I know is going through something that the show touches on.

Do you have any shows that you remember watching as a teenager? How does Euphoria differ?

Ohhhhh yeah. The shows I watched were: The Cosby Show, A Different World, Living Single. I didn’t grow up with cable, so I guess I wasn’t privy to certain shows that were a little bit more risqué. But we’re in a different generation now. The things that I grew up watching were totally different, because I didn’t go through a lot of what teenagers do now. And if I did, oh lord, I would be caught up. Using the phone as a camera, taking nudes and doing inappropriate things—I didn’t have to deal with that. Euphoria is its own living breathing entity, whereas the things I saw were vanilla. They were nowhere near Euphoria’s grittiness and rawness.

Leslie’s like a rock in the show, passing down a lot of wisdom and advice. Who have been the biggest sources of wisdom in your life? Do you have any advice from the Leslie part of your brain and heart that you would want to share with our readers?

For me, it’s life. Life has been a steady teacher in my growth as a person. I’m actually reading a book called Falling Upward—well I’m listening to it on audible, that’s the new term, I’m listening—and it’s like the way down is also the way up. I know that seems counter intuitive, but at some point you have to hit rock bottom. The only way to your true self is hitting rock bottom and then going up. Now you can stay in the rock bottom and dwell there, or you can use that time of loneliness or depression or low self-esteem to propel you to your true self—use it to be more than where you are. So I would just say, hey, the way down is the way up.

This is a great show for you to be on if that’s your philosophy.

Oh my god, you have no idea. Of course, this is just the beginning for me, but this is such a critical point in my life, not just my career, because I’ve been in it, grinding and hustling and trying to prove myself as a dramatic actor. It’s not just a job for me, but it’s a healing project for everything that I’ve experienced up to this point.

That’s great, and I feel like that’s something that definitely comes across to viewers too.

Definitely. Everyone’s like “Wow, it looks so real!” Yeah, because it is real! I have to bring myself to the role. Yeah, it’s Leslie, it’s the lines, it’s Rue—it’s all of these factors. But at the end of the day, it’s my renewal as a person.

With Cal Jacobs, we’ve seen that even as a parental character there’s a lot more to him than meets the eye. Do you think that there are aspects of Leslie that the audience hasn’t seen yet?

Oh yeah, baby. Well, you know, Leslie actually started as a supporting role and it manifested into a series regular. I know that over time, you’ll really see her evolve and see how she ended up where she is now in the story. Sam is so great about giving me the liberty to develop the character while we’re on set, which is unique for me, because usually you get the lines, you get the script, and this is what it is. Sam has definitely given us room to play.

Euphoria just got renewed for season two—congratulations! Is there anything you hope the show tackles in the future, or anything you’d like to see develop with your character?

I think we just need more of what the kids are facing now. Social injustices, I would love to see that, racism, xenophobia, all those things that we as a society are dealing with, I think the show would benefit from reflecting those same themes. I’m sure Sam has a whole lot of topics that he’s yet to discover, so I’m excited to see where season two goes!

Tune in to HBO Sunday at 10 p.m. EST to see Nika slay in Euphoria.