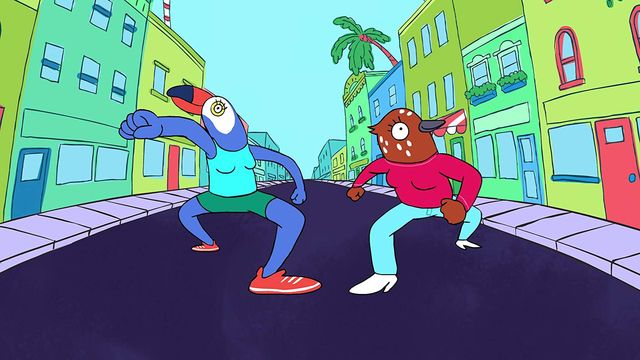 Tuca & Bertie is the latest brainchild of Lisa Hanawalt, the artist who designed everyone's fav depressed horse, BoJack Horseman. The show centers on two bird-women in their early 30s, navigating their new friendship dynamic now they are no longer flatmates. Tuca, voiced by Tiffany Haddish, is a loud and extroverted Tucan, living off her aunt’s money and flitting through the gig economy. And Bertie, voiced by Ali Wong, is an anxious career-driven songbird, who has just moved in with her boyfriend.

Tuca & Bertie definitely isn't a spin-off of BoJack, while Tuca & Bertie have adult themes, it’s nowhere near as dark and is fiercely female-focused. But Hanawalt does use the same flavour of visual humour that makes BoJack so lovable; it's dialed up to an 11. For example, after being ogled by her coworker, Bertie’s breast pops out of her chest and heads off, returning later after a few drinks. The next day, we see her sagging and groaning from a hangover. In fact, everything in Tuca & Bertie is dialed up to an 11. The soundtrack thrums while the neon colour-scheme oozes from the screen like a bite of an overly ripe peach.

Despite living in a pulsing world with loose, cartoonish physics, Tuca & Bertie showcases women as wholly 3D. The show is dominated by women, from the two leading ladies to the background characters two butch lesbian coupled rhinos, to naive country girls facing the big city for the first time.

The storylines and the way they're handled make it obvious that this is a show for women, by women. From dealing with a sexist coworker while navigating a promotion to exploring the complicated world of adult friendship. It handles women's sexuality in a way so few shows do, by presenting it as normal and even mundane; Bertie settles into a rut with her boyfriend, while Tuca lusts over deli-counter boys and butch, older swim teachers.

As a bisexual woman, I found Tuca & Bertie to be a breath of fresh air. Multi-gender and same-gender attracted women are as normal and common in Birdtown as talking plants. Both Tuca's and Coach Meredith's queerness is dropped into the show without much explanation and multiple background characters are in same-gender relationships. We see Tuca lust after women openly and meet coach Meredith's wife right after learning her husband has passed away. There's no tearful backstory of realization and coming out journey's, just queer women getting shit done. Don't get me wrong, stories about realization and coming out are important, but sometimes it feels like that's all we get: storylines about the pain and "otherness" of being queer. In T&B, queer characters don't explain themselves because there's no need to do so, and for me, that's a vision of the kind of queer liberation we should be aiming for.

The inclusion of so many butch characters, such as the DJing rhinos and especially the butch bi Coach Merida, also felt groundbreaking. While depictions of queer women have increased, the ratio of femme/gender-conforming queer characters to butch/gender non-conforming characters is definitely skewed. As a gender non-conforming person dating another gender non-conforming person, I can sometimes feel a little alienated by the idea of femininity being central to love between two women, as important as representation those types of relationships is. So seeing different combinations of butch and femme couples felt true to life and genuine in a way that could only have been achieved with the direction of real queer women.

As well as queerness, the show handles sexual violence exceptionally well. Survivors in media are so rarely the articulators of our own story. We're either the motivation for the male protagonist’s rage or snarling animals seeking revenge at all costs. To see Bertie, who was assaulted by a lifeguard as a child, finally swim to peanut Butter Island - an achievement that was taken from her by the assault - was joyous and healing. Afterward, Bertie heads back to her life in Birdtown, but everything isn't suddenly fixed. She still has problems with anxiety and trust. I think all survivors could tell you that while acts of reclamation are important, they don't fix everything. Only time, therapy, and support can begin to ease the pain and confusion of sexual violence and it's a long journey with no guarantees. That's what made Tuca and Bertie feel so real to me as a bi survivor.

While I saw my type of womanhood reflected in Tuca & Bertie, there are definitely ways in which the cartoon format let down some women. While there is a myriad of characters of different shapes and sizes, it’s hard to say whether this actually reflects a range of body shapes because the show relied on different breeds of animals to create this diversity.

Both Tuca's queerness and Bertie's trauma are given space to be messy and complex and multi-layered. Both aspects contribute to the character's story and personality, but they're not their defining feature. To be a woman in Birdtown is to exist in multitudes. It's so refreshing to see my sexuality and trauma represented but not have to be defined by them. Let’s hope other shows can catch up, so queer normativity and survivor autonomy can exist in the real world and not just in 2D.

Lois is a genderfluid bisexual activist from London, UK. As well as being a writer, they are the founder of the UK's first and only resource for Bi+ survivors in the UK; The Bi Survivors Network. They are currently writing a book for bi teens and listening to a lot of heavy metal while doing it. Find them on Medium or on Twitter at @LoisShearing

Tags: Tuca & Bertie , queer , survivor , assault , visibility , representation , bisexual , tiffany haddish , ali wong
Support Feminist Media!
During these troubling political times, independent feminist media is more vital than ever. If our bold, uncensored reporting on women’s issues is important to you, please consider making a donation of $5, $25, $50, or whatever you can afford, to protect and sustain BUST.com.
Thanks so much—we can’t spell BUST without U.