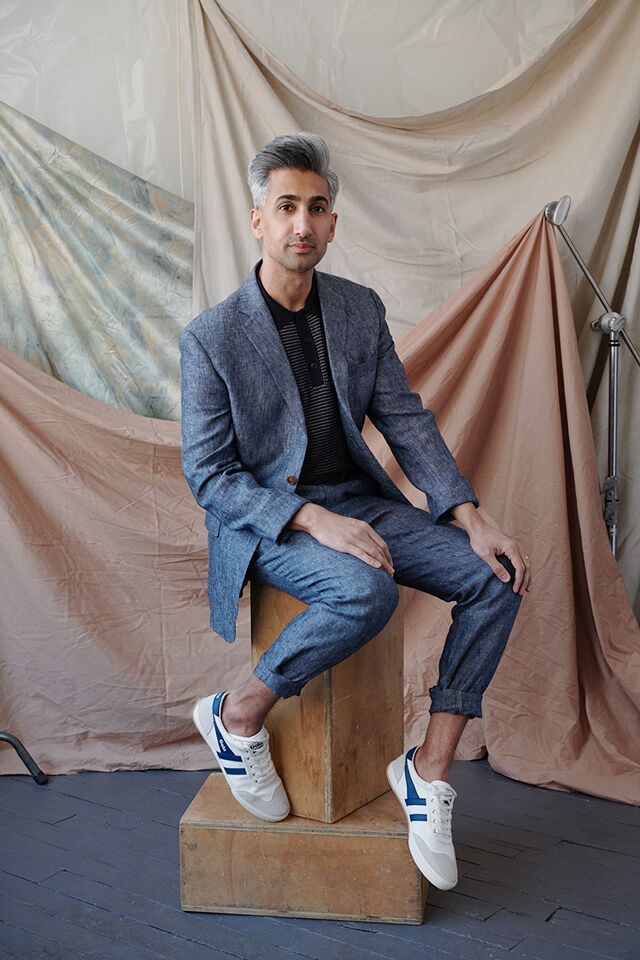 Everyone thinks they know Tan France. As the fashion expert on Netflix’s Queer Eye, he’s famous for his sharp style and wit, which has earned the designer legions of fans—and has positioned his signature touch, the French tuck (tucking your shirt in, just in the front), firmly in viewers’ lexicons. But in the 36-year-old’s new memoir, Naturally Tan (St. Martin’s Press), he demonstrates just how much we don’t learn about him on the show. If you want to know his real story, you’re going to have to hear it the way it’s best told: in his own words.

“When it comes to telling my own personal story, I realize you probably don’t actually know much about me,” he says of his readers once we’re seated after his BUST photo shoot. “There are many stories of gay white men. But there haven’t been any of my people. And so I felt like it was my responsibility to make sure that it was told in my way.”

In his memoir, France chronicles what it was like growing up gay and Pakistani in a small, predominantly white town in South Yorkshire, England, before moving to Salt Lake City as an adult and marrying the love of his life, who persuaded him to audition for Queer Eye. There are also, of course, tons of fashion tips, but if you know anything about France’s style advice, it’s about much more than just following trends. “I’ve spent my whole life understanding the importance of style on my mood, and it’s so nice to be on a show where I can share this with people and say, ‘Just pop something on that makes you feel good. I promise it’s going to change the way you view yourself,’” he explains. “I think people see fashion as such a shallow thing, and it’s not. It means so much more than getting dressed in the morning.”

Readers also learn all about France’s friendships with his castmates, and his surprise at the show’s breakout success—but these days, the Queer Eye buzz is no longer a shock to anyone. The program’s third season dropped in March, and the latest installment shows the boys at their best. In one of the most moving episodes yet, the Fab Five works with Jess, Queer Eye’s first lesbian makeover subject, and according to France, it was crucial to showcase her story. “So many times, people who are not part of our community assume that we all know each other’s struggle. We’re all individuals, every one of us—your experience coming out was different from Jess’ experience, and my experience, and Antoni [Porowski of Queer Eye]’s experience,” he says. “I’m hoping that soon, gone are the days when people just assume LGBTQ means we’re all the same. I want to highlight that every one of our stories is different, and we should be open to listening to those stories.”

As for publishing his own story, France tells me it was never necessarily a life goal of his to write a book—but he’s excited that he did. Because right now, he says, “this story isn’t told enough. These stories aren’t told enough.”

MTV’s Dating Show “Are You the One?” Will Feature a Sexually Fluid Cast