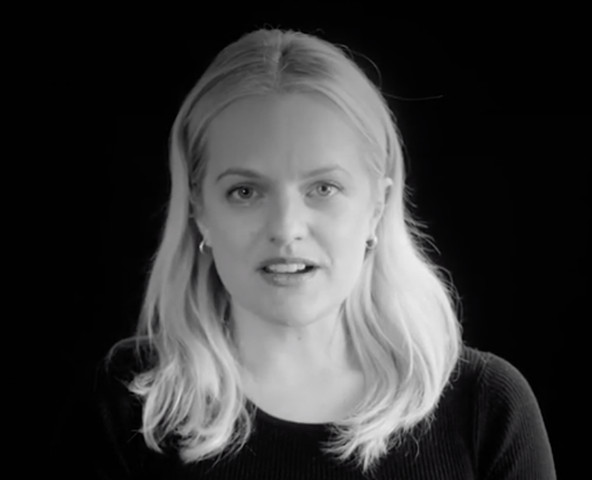 Following widespread abortion bans across the United States, the cast of The Handmaid’s Tale has released a PSA advocating for the protection of women’s reproductive health. Set in Gilead, a post-American dystopia where the rights of women are both virtually nonexistent and flagrantly violated, the show has become a symbol for the struggle against female oppression.

With new, abortion-restricting legislation being proposed what feels like every day, it’s almost impossible to keep track of all the damage. This PSA, scored with somber music and filmed in black and white, does the math. “Kentucky, Mississippi, Missouri, North Dakota, South Dakota, West Virginia”: Samira Wiley and Madeline Brewer, who respectively play Moira and Janine on the show, list off the six states that now have only one legally operating abortion provider. “Ohio, Mississippi, Louisiana, Kentucky, and Georgia”: Amanda Brugel, who plays Rita, names the states that have passed “heartbeat bills,” restricting abortion to the first six weeks of pregnancy—usually before a woman is even aware of it.

“When we start restricting access to abortion, our country takes one step closer to Gilead,” says Elisabeth Moss, who stars in the show as June.

Just last weekend, Kylie Jenner came under fire for throwing a Handmaid’s Tale-themed party—notably featuring “sexy” handmaid costumes and drinks like “Under His Eye Tequila.” Criticized for her extreme entitlement, the ability to jokingly trivialize the oppression of women clearly demonstrates wealth’s ability to shield her from inequity, the event inspired a number of think-pieces, including those questioning the need for the show’s existence in the first place. In a recent Guardian article, columnist Arwa Mahdawi argues, “Is dressing up as a handmaid for fun really so much worse than watching the TV adaptation, which seems to revel in violence against women and has been described as ‘torture porn’?”

With the show’s increasingly gory and sadistic trajectory on the one hand and Kylie Jenner’s tactless party on the other, this PSA harkens back to the root of Handmaid's Tale, serving as a sharp reminder of how it should be viewed and understood.

Think back to the first season. Remember when Serena Joy, Commander Waterford’s wife, wrote books and articles advocating for “domestic feminism”? You know, before plotting the demise of civilization as we know it? Well, people are sure as hell doing that now. Just look at anti-feminist Suzanne Venker who just wrote the ridiculous piece, “The real reason millennials are in such bad financial shape,” for the Washington Examiner, blaming women’s professional ambitions for the downturn of the entire economy.

How about Aunt Lydia at the handmaid reception/indoctrination/internment center imploring the women to recognize themselves as having been sluts in their former lives, even going so far as to incite a group shaming for Janine’s having been an assault victim? Well, what about the viral tweet by writer Denise McAlister that blamed women’s uncontrollable horniness and “lubed legs” for unwanted pregnancies? These posts have gotten a lot of flack, but they have a lot of support, too.

In season one, viewers were painstakingly walked through how American democracy fell and authoritarian Gilead rose. Women lost jobs and were thrown out of coffee shops; slurs were hurled at them, their money was taken away. As June says in the show, “Nothing changes instantaneously: in a gradually heating bathtub, you'd be boiled to death before you knew it.” She laments that she and her family were too late to flee the country, furiously wishing that they had recognized the signs earlier. With a striking resemblance to the trajectory of Hitler’s ascent in 1930s Germany (I mean, this show is basically a futuristic version of the Holocaust, see: the “normal guys” who let legislation pass without intervening, the Colonies, public hangings, etc.), Handmaid’s Tale poses the ever-frightening and omnipresent question: When is it time to cut and run?

Though Handmaid’s Tale has been swept up by a dramatic and harrowing plot that lends itself both to valid criticism of a sensationalist approach to violence and female brutalization as well as consumption like any other TV show created for entertainment, this PSA serves as a reminder of what it’s really about. Handmaid’s Tale is about activism. It is about recognizing the signs that so many throughout history, like June, saw too late, and responding with swift, uncompromising action. It is about never getting to the point when we’ll wish we left sooner.

The show has the capacity to put viewers on their toes, to notice that the headlines we’re scrolling pass—children dying in immigration detention centers, anti-abortion bills, a growing number of humanitarian crimes—if gone unexcused, are horrible precursors to even more horrible things to come. Abortion restrictions must be struck down. Immigrants in border detention facilities must be released. Congress must impeach a President who openly flouts the law. And these measures can only be the start. Sitting quietly as rights are stripped away is how mass atrocities happen. Not just in some text book, but here and now and always. The Handmaid’s Tale, at the core of the show and in this PSA, is more than a disturbing plot or a Halloween costume—it is a call to arms.

Text RESIST to 22422 to get involved with Planned Parenthood and the fight for women’s right to reproductive healthcare.