A Voice of A Generation: My Complicated Relationship with "Girls" 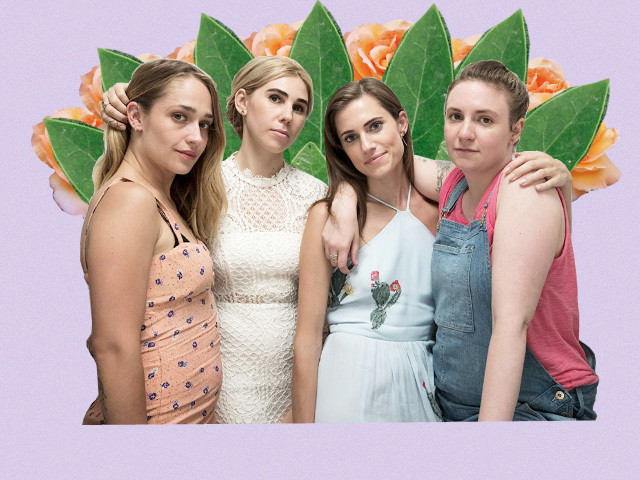 I didn’t know what to make of Girls the first time I watched it. I remember the hype well. I remember where I was when I first even heard of it, in late 2011. A family vacation to New York merited a Broadway show, this one being The Book of Mormon.

“Oh, he’s gonna be in that new HBO show, Girls! I hear that’s supposed to be really good!” My mom said upon reading Andrew Rannells’ bio in the Playbill.

When the show finally premiered months later, I decided to give it a try. I thought the line about Hannah being the voice of a generation was funny; I liked the quirkiness of eating a cupcake in a bathtub. But I didn’t really “get it.” The humor was too dry and the characters were too polarizing. I watched an odd episode here and there, but didn’t think too much about it until I revisited the show during my senior year of high school. Funnily enough, this was right after I sent in my early decision application to Oberlin, the college that many of the characters attended. The initial hoopla surrounding Girls made it harder for me to see it for what it was, an unflashy collective of character studies that comes alive most in quietly brilliant moments.

Girls is a much better show than it is often given credit for, but the critiques often lobbed against still bear repeating. It is, in fact, an incredibly white show, a show that doesn’t at all accurately reflect the demographic makeup of New York. As for Lena Dunham herself, her behavior through the years has tested the limits of what other lefty millennials like myself usually chalk up to being a “problematic fave” to being just plain problematic. Responding to charges of racism against the show’s first season, Dunham cast Donald Glover in a tokenized role, a black Republican who only lasted for a couple of episodes, never feeling fully integrated into the show's fabric. Her comments insinuating that football player Odell Beckham Jr. didn’t want to sleep with her at the Met Gala played up the hypersexualization of Black men, and the history of white women making false claims against them. In 2017, author Zinzi Clemmons announced that she would no longer contribute to Dunham’s Lenny newsletter because of her “well-known hipster racism.” 2017, the year the show ended, the year #MeToo broke wide open, was also when my Internet relationship with Dunham came to a screeching halt. She stood by and offered a statement of support after former Girls writer Murray Miller was accused of rape by Aurora Perrineau. For someone who had built a career on allegedly supporting women, who had tweeted only weeks before that women don’t lie about rape, reading Dunham's statement felt like someone had thrown a bucket of cold water on me. I shouldn't have been surprised, based on her very long track record of disappointing me. But this felt like a new low.

"While our first instinct is to listen to every woman's story, our insider knowledge of Murray's situation makes us confident that sadly this accusation is one of the 3 percent of assault cases that are misreported every year,” Dunham said in a statement with her producing partner Jenni Konner. Dunham would later retract her previous statement and offer Perrineau an apology, but any grown-ass woman should have already known better: believe women.

I have definitively quit paying attention to Lena Dunham, yet I can’t quit the show. I can’t simply walk away from something that is, subjectively speaking, great art, a show that had something to say about millennial ennui and the hustle to make it in this city we call New York. Great art can be made by complicated people. I am by no means offering up a definitive statement on how to separate art from the artist because that question is so nuanced and personal that I don't think there can ever be a definitive answer. I wouldn’t necessarily correct anyone who said they refuse to watch the show. But I also can’t help but think that young, high profile women who suddenly arise to power are far more precariously perched than their male counterparts. The dearth of female auteurs with that kind of exposure meant that there were many young women like myself for whom Dunham represented change and possibility, someone who made us feel represented.

It’s easier to dismiss Dunham’s work because it comes from a place that is distinctly feminine. How many women are called geniuses? Weren’t we using that word to describe Louis CK’s eponymous show, similarly gritty New York realism that existed concurrently with Girls? Woody Allen’s oeuvre is just as white. But these men have had long and storied careers, while Dunham found herself immediately raked over the coals for being more than a size 2 and still daring to show her naked body on television, for presenting characters who were whiny and complicated and sometimes hard to root for. (Criticisms of Dunham’s empty brand of feminism and white privilege are very much warranted; criticisms of her body are not.) Furthermore, the concept of male genius has historically been used to obfuscate gross and predatory behavior, to allow men in positions of power to hide behind their work in an attempt to escape scrutiny.

Yes, the world Dunham created is populated by characters who are often insufferable. But why are we more offended by twentysomethings attempting to piece together a meaningful life than, let’s say, mobsters or murdering meth-dealers? Hannah Horvath is certainly no Tony Soprano or Walter White, but she exists in the same category of anti-hero, albeit one more squarely in the tradition of Sex and the City’s Carrie Bradshaw, the show serving as the blueprint for depicting young single women and their friends for generations of television to come. Despite Sex and the City predating The Sopranos by a year, the show rarely gets the same kind of credit for its depiction of complicated women and helping to put HBO on the map as a place for prestige television. In Emily Nussbaum’s New Yorker profile “Difficult Women,” Nussbaum points out how Carrie and co are arguably the first female anti-heroes on TV, contrasting them with earlier depictions of single women on TV. Nussbaum writes: “Carrie and her friends—Miranda, Samantha, and Charlotte—were odder birds by far, jagged, aggressive, and sometimes frightening figures, like a makeup mirror lit up in neon. They were simultaneously real and abstract, emotionally complex and philosophically stylized.” The SATC shadow looms large over Girls, though the characters on the latter aren’t as easily categorized as a Charlotte or a Samantha. Even in the first episode, the uber-chipper Shoshanna expresses disbelief that her cousin Jessa has never once seen an episode. Girls exists in the wake of its glitzy nightclubs and constant stream of brunches, an unachievable lifestyle for most people in the post-recession economy.

Carrie Bradshaw has her moments of being a truly terrible person. She also could be witty, relatable, and aspirational. Hannah Horvath is far less aspirational, yet perhaps far more relatable than any of us would like to admit. We should hope to not be as heavily steeped in her narcissism and self-victimization, but I appreciate that the women on these shows are allowed to be “difficult.” Women can be all sorts of ways, and sometimes that includes being just plain insufferable.

The older I get, the more Girls resonates with me. I am acutely familiar with the world of grimy, intellectual hipsters that is Oberlin College. I know exactly what kind of idealistic creative souls that it breeds. I know what it’s like to move from there to Greenpoint, Brooklyn. I have experienced making no money at an internship that you futilely hope will turn into a job. I regularly hit up Cafe Grumpy, only a few blocks from me. I’ve hung out in divey Bushwick bars, dated at Roberta’s, and bowled at The Gutter. All without trying, I’ve been living the Girls experience. I don’t have a college nemesis a la Jenny Slate’s Tally Schifrin, but I have my fair share of intimidating fellow alumni. I spend too much money on artisanal baked goods. However, much of the show’s relatability comes from surface level similarities.

Digging a little deeper, there’s a lot I can’t relate to, though that shouldn’t preclude me (or anyone) from enjoying the show. I’m far too skittish for a coke binge and far too non-confrontational to yell at my loved ones in the way that approximately every character did to the people in their life. I would never be able to recover from the knock-down-drag-out brutalism of the infamous “Beach House” episode spat. Friendships aren’t that hard. You’re either my friend, and you’re a good friend, and I know that, because I don’t have room in my life for anyone who is not a good friend. Or you are not my friend. We can get into minor disputes or arguments. But if you called me a “fucking narcissist” or “unstimulating” or even proclaimed that you were the good friend and I was the bad friend, the permanence of our friendship is not in the cards for us. I’ve been through too much to give time and energy to unhealthy relationships. I love my friends dearly and fiercely. I want to cheer on their accomplishments and their positive attributes like they do for me.

The friendships among the four leads felt never felt terribly authentic. Or perhaps, that’s because they felt too authentic. Girls strove so hard for a kind of raw realism that usually left me wondering why these girls became friends in the first place. Which is exactly where the emotional center of the series’ penultimate episode lies: “I think we should just decide to call it,” Shoshanna says during her engagement party, where the four leads attempt to reunite, before coming to the bitter realization that their friendship isn’t working anymore. Finally, the thin veneer of camaraderie is broken. Like most moments in life, the ending of Girls was not happy or sad - it just was. Maybe Girls was never meant to be a celebration of female friendship, but rather, an ode to the loss that happens in the process of finding yourself.

Girls was an imperfect and delicate valentine to a certain brand of Brooklyn millennial. It was never a show about a universal experience, but it was built upon universal themes - romantic and platonic love, self-loathing, and being hungry for more than what you currently have before you. Even if the relationships on the show never felt all that familar, other parts of it are deeply real to me -  that millennial tendency for navel-gazing, for immediately nostalgizing the past, and meandering on the path to self-discovery, unsure of my own endgame.

Is Lena Dunham Really The Best Person To Write A Syrian Refugee Story?