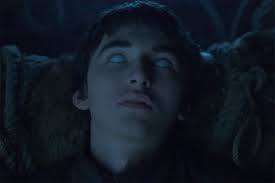 Game of Thrones is coming to an end, and with the close of the season, there are some mysteries that have long lived throughout the series—primarily the “Three-Eyed Raven.” Originally brought to Bran in a dream, the raven tells him about his heritage and leads him to safety.

GOT is a show that is heavily enriched in spiritual and magical themes—especially the symbolism of the raven—which is why it’s essential to explore the occult meaning behind the raven to understand the underlying plot of the show.

In mythology, ravens represent bad luck, as they are seen as a messenger of evil and unruly news. However, spiritually, ravens have a different meaning and often represent the relationship between the divine and personal magic. The Hindu religion and the Bible both denote ravens as a connection to what is holy, as well as a peace offering (this later transitioned into a dove with an olive branch). The Celts view ravens as a symbol of prophecy. The representation of ravens in dreams means good luck is coming our way. The number 3 represents the connection to the Holy Trinity (body, mind, and spirit), as well as the “holy stamp” of completion (according to the Bible). No Chinese culture, the number 3 is considered a lucky number. While in numerology, it marks a connection to one’s guardian angels and a superhuman exuberance of life. And, having a third eye represents enlightenment and intuition.

While all of the above is seemingly true, one can’t help but wonder what the actual occult and magical representation of the raven means. We asked several occultists, mystics, and witches for their understanding of the raven to bring us more clarity on the matter. Also, to see if our GOT fan theory is correct.

“The symbolism behind Bran’s transformation into the three-eyed raven is about the cyclic nature of death, rebirth, and human consciousness. The Three-Eyed Raven is beautiful in that the symbolism behind the number 3 is the shifting of energy, expanding beyond duality. It has been said that the astral and spiritual body stays connected after death for 3 days. In the series, Bran was pushed to his ‘death’ and experienced a spiritual rebirth. When he came back, he no longer identified as his mortal ‘self’ yet something else: he came back as a Seer, the three-eyed raven. There is scientific evidence that the brain, even when all other systems are failing takes three days to register complete shutdown. There are 3 phases to the moon, which again is symbolic of the deep subconscious of our minds. Expression, manifestation, and synthesis. Ravens hold their own symbolic magic, these are powerful animal messengers between realms. In Greek mythology, they were associated with Apollo and prophecy. These are highly intelligent creatures, and ravens as animal totems come as guides of spiritual rebirth. Which again, takes us back to Bran’s ‘death and rebirth.’”

— Bri Luna, Creative Director and Founder of The Hoodwitch

“Generally speaking, many cultures have believed ravens to be liminal beings: messengers of the gods or psychopomps who escort deceased souls to the underworld. Augury, or interpreting symbols in nature that predict the future, was originally done in ancient Rome using birds. The fact that Raven-Bran has three eyes is also significant. In both Hinduism and the religion of ancient Egypt, there is a notion that humans have a "third eye" between their brows (roughly where the pineal gland is) which, when activated, can help us access higher states of consciousness and give us greater powers of intuition and foresight. Triads of all sorts have occult associations, whether we speak of the Maiden/Mother/Crone triple goddess; the Three Fates or Moirai (called the Norns in Norse mythology); triple-faced Hecate, the Greek deity of witchcraft; or even the Holy Trinity of Christian mysticism. Shakespeare's Weird Sisters of Macbeth were another famous threesome, and their name is sometimes interpreted to have been derived from the Old English word ‘wyrd’ which means fate. The three-eyed raven can therefore be considered a ‘wyrd bird’ of a sort: an entity that transcends the bounds of time and space, and brings secret knowledge to those in the present who may be guided by it, or doomed by it, depending on your view of destiny.”

— Pam Grossman, author of “Waking the Witch: Reflections on Women, Magic, and Power” and host of “The Witch Wave” Podcast

“Three-Eyed Raven, to the cards of the Tarot deck and this character, makes me think of the Strength card, which reminds us to embrace our power and glean the positive aspects of our primal or animal instincts rather than simply being beholden to our impulses, much like the three-eyed raven is able to harness aspects of various animals' powers to his own advantage to keep himself empowered.”

“Birds represent the air element. Air governs thought, communication, philosophy, intellect, and generally most workings of the mind.  Ravens specifically represent secret knowledge, wisdom, prophecies, and connection to the other side. The third eye is our eye that knows, not sees. It helps us tap into our intuition, psychic ability, and the higher self. The Night King seeks to not only destroy humanity, but the very thing that makes us human and thus, the Three-Eyed Raven is his target.”

“Bran definitely has Odin-like qualities, as he has also suffered great physical harm but has gained knowledge of magic through these trials. Odin also had two ravens, Huginn and Muninn, whose names mean ‘thought’ and ‘memory’ respectively. Odin would send his ravens flying around the world to gather knowledge and bring it home to him. Similarly, Bran also sends his spirit into ravens in order to gain knowledge and spy on enemies. The three eyes are also interesting. Outside of Scandinavia, having a ‘third eye’ has been a symbol of great psychic power, while the number three is one with many magical associations all over the world. In Northern European myth, there were three women known as The Norns who presided over the well of fate and who knew the destiny of everyone, even the gods. Looking at these associations, it's no wonder why the Three-Eyed Raven is such a powerful spirit ally to Bran!”

“Crows and ravens have been symbolically significant within the realms of divination, superstition (omens), and literary symbolism for centuries. Some of its earliest appearances can be found within Greek Mythology, as ravens are associated with Apollo and his ability to delivery prophecy. The Three-Eyed Raven takes this metaphor a step further with a nod to the chakra system, as our 'third eye' is an energy point associated with psychic ability and intuition.”

“The Three-Eyed Raven is symbolic of the past present and future. All of these events are taking place at the same time in the head of the raven across several different timelines while he holds no bearings over the will Of others he can see what has happened based on their choices and also what can happen as a result of their choices. This frees his other eye up to be able to take account of the events that are happening in the present—an omnipotent presence within Planetos.”

“If a three-eyed raven existed as a mystic in our world, we might think of them as a clairvoyant with access to the Akashic records — which is basically a universal encyclopedia that exists on the etheric plane and is believed to store 'records' of everything that has ever occurred in the past, future, or present of human history. Psychics (such as 20th century mystic Edgar Cayce, for example) are believed to be able to interpret information directly from the Akashic records, which mirrors the skill of the the mythical three-eyed raven. The symbolism of the raven itself is important here, too. In occultism, there is much study around the concept of alchemically merging our physical selves with a spiritual entity — which reflects the nature of the three-eyed raven, as a human taking on the consciousness of a spiritual being and becoming one with it. In alchemical transmutations, ravens are often invoked or used symbolically to represent an element in transition — so it makes sense that this Game Of Thrones entity would be represented in such a form, additionally with a third eye to symbolize its ability to see beyond the physical realm.”

“Contrary to popular belief, most Native American tribes consider the raven to be a good luck omen, not one of death. Some even believe that this bird can shape shift, bringing medicine to their people. I am 1/18 Cocheco, and years ago, before she passed away, my grandmother told me about the historical lore from our tribe of the one-eyed crow. Legend has it that a raven would visit all the newborn babies while they slept their first sleep and waited for their mother to return to the room so they could show her a vision of her son's future. But then one day a crow with only one eye in the middle of his head came to visit a new born boy. The crow did not show the new mother a vision, and later that day, the family was visited by the tribe's shaman who took the baby without any explanation of why or even when they would be back. Twelve years passed before he finally returned, and the following day, the village was attacked. The battle was unexpected but it turns that the boy had been training for this day his whole life with intense shamanic and combat training, and he defeated their enemies and saved the tribe!It’s  a metaphor about trusting in the universe, and also allowing for the duality of nature. Sometimes what seems cruel is actually a gift and we can only understand it when it's time to understand it. It's a metaphor we could apply to the plight of so many of our beloved characters on GOT, but especially our young Three-Eyed Crow.”