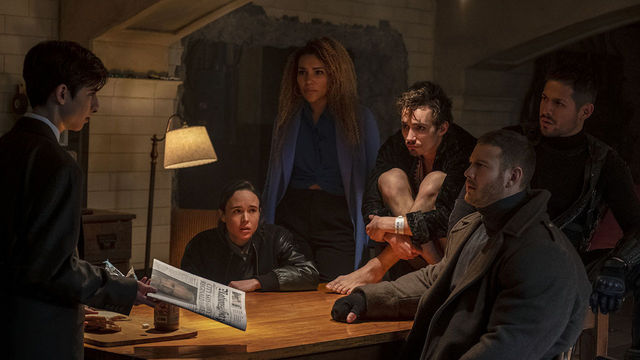 The Umbrella Academy is a wild ride in a fantastic world with well-drawn characters who viewers start rooting for early on. But more than that, even with superpowers, time travel, and a talking monkey in a three-piece suit, this Netflix TV series is one of mass market pop culture’s few realistic looks into what it means when adoption is not a fairy tale ending.

Movies centering around the topic of adoption tend to focus on the parents (to be), and most often end with the adoption being legally completed, either after struggles around conception, or with rebellious teenagers successfully welcomed into the house. Recent entries in the multiple-kids-arrive genre include last year’s Instant Family (with Mark Wahlberg and Rose Byrne), where fostering teenagers is depicted as a process where love and dad jokes can triumph, heading towards judge-officiated adoption as the conclusion with the same pace that a ’90s romcom barrels towards the wedding day. Another recently concluded TV show, The Fosters, which followed a queer couple and their biological and foster kids, also spent the bulk of the series focusing on the ephemerality and challenges of the foster status, and the process of the kids’ integration into the household. While the show did move into a post-adoption period, it didn’t shift the original theme substantively.

In its depiction of each kid’s ultimate loneliness and sense of not belonging anywhere, The Umbrella Academy possibly relates most closely to Short Term 12, an indie favorite with Brie Larson, which is set in a short term group home for foster kids, a place where some residents spin fairy tales to share their unfathomable past. A Series of Unfortunate Events, another book-turned-Netflix show, is closest to the narrative of The Umbrella Academy—and, at times, is similar in style to it as well—which opens with the main characters moving under guardianship, only for them to spend the series trying to escape, fighting for legal independence over being adopted by a loving family. Overall, if it is ever reached, adoption in popular media is the endgame, the happy ending where we can part from the characters with a sense of completion as the credits start to roll.

The Umbrella Academy—based on Gerard Way’s comic book of the same name—chooses another path, setting up adoption as the terrible beginning. It centers on seven children with extraordinary abilities who were all born on the same day to mothers not yet pregnant when the day started. Hearing of these mystical births, eccentric billionaire Reginald Hargreeves seeks out and purchases and adopts the infants (in a manner more resembling child-trafficking), to raise them as a team of crime-fighting vigilantes. The kids are trained roughly, sent into combat early, and are provided a robot “mother” so Hargreeves doesn’t have to worry about caregiving. Hargreeves refers to the kids by numbers One through Seven, assigned in order of their value to him, seeing no need to give them names. Rebelling against the life set out for them, most of the children leave the creaky house behind one by one, losing ties with one another. When we meet them in the series, they are about to turn thirty (except Number Five, who is simultaneously a tween and in his fifties due to time travel). They are seeing each other for the first time in years on the occasion of their adoptive father’s passing.

It is only six of the seven, however, who gather, because Number Six did not make it back from one of their childhood missions. The mandatory, inescapable danger Hargreeves puts the children through, coupled with a home life completely devoid of love, becomes a representation of neglect and abuse in unloving homes everywhere. By using flashbacks, The Umbrella Academy skillfully captures a family that looks cohesive to those on the outside but is dismal to those living in it. The obvious emotional neglect comes through within minutes in the first episode, where the father is unwilling to even look up from his notes when the kids line up at his office door to wish him good night. We learn not much later that asking their humanoid mom how her day was prompts her to systematically recount data on the exact time of sunset that day and the items of the dinner menu, never letting the kids forget that they are ultimately talking to a robot.

Images of abuse come soon after, and it is a major strength of the show that it doesn’t shortchange the experience of abuse in an unloving home with quick flashbacks to violent outbursts, but shows the complexity of intertwined emotional and physical abuse. The father regularly points out everyone’s weaknesses to them, and explicitly states that one of kids, Number Seven/Vanya (Ellen Page), is simply “not special” and he sees no point in her even training with the others. The depiction culminates in a scene where the kids in training have mandatory tattoos grafted onto them, crying from the pain, while Vanya, hiding out of sight, longingly outlines the same pattern on her skin with a marker, wishing she was “worthy” of being tattooed as well. The scene uniquely captures the way long-term abuse with little exposure to what a non-violent home could look like conditions what is considered “normal.”

In Short Term 12, at least the kids have someone to tell stories to. In The Umbrella Academy, each sibling is so focused on their own problem that they can’t hear each other’s pleas for help. Midway through the season, one of the now adult siblings, Klaus, is kidnapped by assassins and held captive for more than a day. Although five of the siblings have now been living together in their late father’s house for several days, none of them notice his absence. They are so occupied with little things and enormous events alike that they never end up realizing he was ever gone. Painfully, sitting tied to the chair in the assassins’ hotel room, Klaus is correct in knowing that none of his siblings will realize his absence. Klaus ultimately escapes with no help from outside forces, being the living metaphor for the experience of kids in unloving homes who know better than to hope for an action movie hero to rescue them.

One of the subtlest yet most powerful aspects of the show is the showcase of the long-lasting impact their upbringing had on the siblings, both in terms of repercussions that impact them negatively and coping strategies they found to make it though. Remnants of the past lead to drug use, severe trust issues and repression of emotions, dropping out of college when they could have aced the major, and a disbelief in one’s self-worth. Regardless, what they ultimately learn is that coping means being kinder to themselves, as well as leaning on each other in ways they couldn’t and wouldn’t for years. The final moments of the season stand as a question of choosing trust or fear, and it seems that the Hargreeves kids have learned their lesson – the way forward is accepting their past and moving forward, believing that they can, together.

Panka Bencsik is a PhD Candidate at the University of Sussex (England), and she calls the US, the UK, and continental Europe all homes. Beyond her academic research, she is interested in cultural criticism, and in particular how pop culture's presentations of social roles change over time, and what it means for audiences to watch these changing representations.