Details
BY Gretchen Sterba
IN TV
Published: 06 May 2019 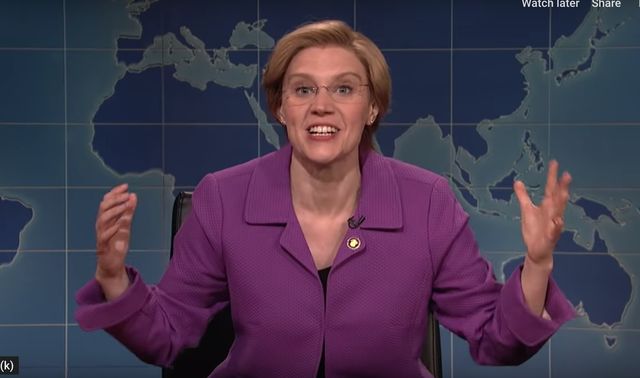 If you watched Saturday Night Live this weekend, you saw Kate McKinnon execute Elizabeth Warren’s frustration at not getting the recognition she deserves.

In the “Weekend Update” segment, McKinnon points out (hilariously) that fellow male running mates have been getting more press for trivial things (i.e. joking that Beto O’Rourke did parkour in Starbucks and Pete Buttigieg is so well-rounded and intellectual he speaks Klingon), but this does raise an important question — why is Warren not getting press like Joe Biden and Kamala Harris who have a noticeably problematic history? Is it because Warren has been advocating for black women and people of color?

Two weeks ago, Warren unveiled a plan to reduce the maternal mortality rate among black women. After all, black women are three to four times more likely to die in childbirth compared to white women, NPR reported in 2017. When Warren announced this at the She the People summit in Texas, she detailed that medical providers would be rewarded with bonus funds providing an incentive to reduce these numbers.

On Twitter, Warren went in further detail about the planned posting: “We've done this in other areas of health care. Let's do it here. If providers deliver quality care to Black moms, they’ll make more. If they don’t, they’ll make less. Don't just observe and debate racism in health care. Make providers pay until this crisis is fixed.”

There are indeed criticisms of this plan, like New York Magazine published, proposing hospitals may not have the funds to implement this idea, as they are already strapped for cash and resources for patients already. Regardless, Warren is attempting to take action and fight on an issue that is so often swept under the rug, or ignored by other presidential candidates.

At the time of writing this, Biden is leading in the polls for the presidential primary, almost 30 points ahead of Warren, who comes in third place after Bernie Sanders. It’s funny, and perhaps timely, that an old video resurfaced this past weekend from a 2005 senate meeting where Warren, a then law professor, and Biden clashed over legislation that would make it harder for Americans to file for bankruptcy. The video, highlighted by CNN, also showed that Warren has been critical of Biden as early as 2002 when she wrote in the Harvard Women’s Law Journal writing Biden “supports legislation that will fall hardest on women.” And let’s not forget about his stance on Anita Hill, which he only recently apologized for.

Say what you will about Elizabeth Warren (yes, we know it was an awkward moment when she tried to prove to everyone she was of Native American descent), but something that cannot be ignored or tried is Warren’s consistent and dedicated work for people of color.

Sure, her college plan got some traction when she said she plans on reducing student debt, but something that was also outlined was her plan to fund HBCUs, giving at least $50 billion to the institutions, as Ebony reported.

So many people would like Kamala Harris, a woman of Indian and Black heritage, to be president, but let’s not dismiss her regressive nature years ago when she declined to take a position on Proposition 47, a ballot that would reduce low-level felonies to misdemeanors. And in 2015, she opposed a bill to require the state attorney’s office — the title she had at the time — to investigate shootings involving police officers. She also has an unfortunate record in wrongful conviction cases, which poses the question: if elected, what will she do to help mass incarceration?

None of the Democratic presidential candidates are perfect, but perhaps we should note revolutionary ideas when we see them, especially ones that benefit people of color. As members of the media, we have a job to do, and people like Warren, who have been campaigning for equal rights and representation everywhere, should receive the same attention Biden gets at a rally; except something tells me the latter is getting more than some.

Everyone Running (And Considering Running) For President So Far