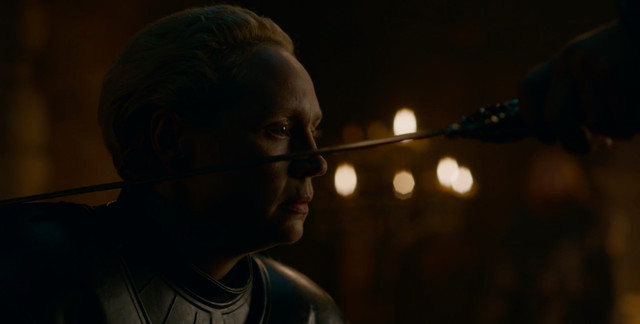 This past Sunday, everyone’s favorite woman warrior, Brienne of Tarth, was officially knighted. Now Ser Brienne, Game of Thrones fans can take comfort in the fact that Gwendoline Christie’s iconic character now has the respect and title she deserves.

Game of Thrones has been both praised as a feminist show and criticized as being un-feminist. The past two seasons have garnered critical acclaim for the feminist themes presented in the show, with the majority of the surviving leaders being women.

In the second episode of the final season, fan-favorite characters Brienne, Tormund, Jaimie Lannister, Podrick, Tyrion Lannister, and Davos all congregated around a fire, preparing for what may or may not be their final moments alive before the long-teased Battle of Winterfell. Tormund, the wildling harboring a crush on Brienne (upon his arrival to Winterfell, he immediately asks if “the big woman is still [there]”), balked when discovering she was not a knight. Upon asking why not, she simply says it’s tradition.

Tormund, aptly saying what most of the audience has been thinking for the past eight years, says: “Fuck tradition.”

Jaime then realizes that any knight can make another knight. In an emotional scene, one the show has been building up to for years for Brienne, Jaime knights her Ser Brienne of Tarth, Knight of the Seven Kingdoms. As the first official female knight of Game of Thrones, Brienne will be the first woman in the show to help lead an army into battle next Sunday.

This is a monumental event for television and the high fantasy genre in general. Even though these universes are completely fictional, many (male) writers decide to implement sexism, racism, and homophobia into their worlds. There are few women warriors in film, television, and books. While the world of Game of Thrones has these issues, it still manages to subvert some of the sexism, challenging both old age and modern cultural norms.

Christie embraces her androgyny in the role of Brienne, which is even more emphasized by the show-runners’ decision to call her “Ser Brienne” rather than “Lady Brienne” or simply “Knight Brienne.” Since the character’s appearance on the show years ago, she has been challenging gender norms. She trains Podrick to be a knight, remains stoic in the face of adversity, is loyal (almost to a fault), one of the best and strongest fighters in all of Westeros, and defies those who would put her down.

After Jaimie knights Brienne, she smiles and tears up, something the often stoic character has rarely, if ever, done.

The show has also put a spotlight on Sansa Stark, showcasing her more than competent abilities as the Queen of the North. In my ideal world, the show would end with Sansa ruling the North with Arya as her hand and Brienne as the leader of her armies, however that might all change in the next few episodes.

At the end of the episode, Podrick sings an original piece “Jenny of Oldstones.” The camera follows all of the characters, including Ser Brienne and company, in their possible final moments. The touchingly human scene emphasizes the emotional journey we have taken with these characters over the past decade. Hauntingly covered by Florence + the Machine, the song forebodes the battle to come. Having the privilege to see such an amazing character as Brienne on screen has affected so many women and me. Seeing her evolve from a Lady unvalued by her peers to the legendary knight she is this season, has been one of the better stories on the show. All I can say is that next Sunday, I’ll be cheering for my favorite knight, Ser Brienne of Tarth.

[BUST NOTE: Keep an eye out for our May/June 2019 issue. A certain knight is our cover gal]