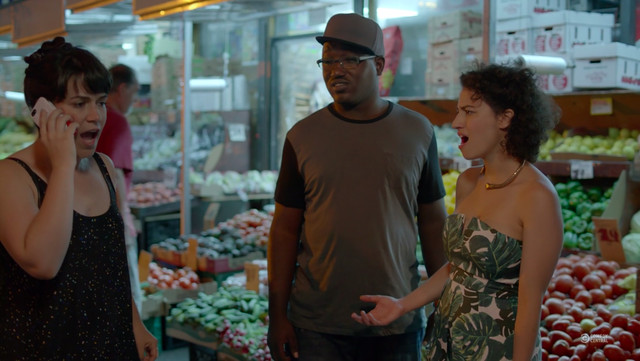 We live in a world with a multitude of fictional male characters on television who are problematic faves. Take Luke Danes from Gilmore Girls, who has a history of slut-shaming Lorelai and spewing homophobic comments. Or Ezra Fitz from Pretty Little Liars — super hot, but also stalks a 16-year-old girl when he’s her teacher. And Jim Halpert from The Office can be adorable and highly favored, but sometimes he can straight up be a dick to Pam, like when he makes huge, life-altering decisions without her.

Sometimes, we tend to overlook these dudes because we like to remember the good moments. Luckily, there are some male television characters who we can love knowing they’ve supported their fellow women characters and aren’t entirely misogynistic assholes. They offer support, humor, and understanding to guide these women along their journeys without mansplaining, or centering the attention on them.

I mean, are we ever going to have another lovable cop like Elliott enter our viewing eyes ever again? Although there are times when his anger gets the best of him (understandably so when he’s dealing with rapists and predators), he and Olivia are a team. He looks out for her, instead of undermining her and taking on the “macho cop” role. He makes her better and vice versa. We stan!

Did you really think we’d forget to include this Y2K childhood fav? He’s only 13, but Gordo basically has the morals and ideals of a 35-year-old man. Oftentimes he’s the only one with Lizzie’s best interest in mind, and how can we forget when Lizzie goes through her first breakup and is sobbing to Gordo, when he says, “There’s no one prettier than you or more fun to be with”? We’re not crying, you are.

Darius is eccentric, weird, and totally unforgettable in this series. Although he necessarily doesn’t interact with many female characters, he’s an honest, zany, and interesting character in this hit show. We don’t see many characters like him, so he remains an unproblematic male fave.

We only had a taste of this smart mouth yet loyal character for three episodes on the first season of Sandra Oh’s hit show, but oh, how he made an impression. He was more than a work husband to Eve: by guiding her to her true potential, being there when she needed him, and believing her when no one else does. We could not think of a better man to leave Eve to conquer this thrilling adventure by herself.

We love Jaime’s flamboyant self, but who can forget how good of a friend he is, too? (Think back to when he stayed literally all night to find Abbi’s frozen yogurt flavor when she got her wisdom teeth removed.) He’s lovable and always has weed, so he makes our list.

Now, you don’t think we forgot about Lincoln, did you? Just look at some of his best lines in the show: “I’m not getting married until everyone can get married.” “I’d do it. I’d pick up your poop. You’re worth it,” (which he literally says to a dog he just met). We love him because he always helps out Abbi and Ilana when they’re in a jam, and is an easygoing, gentle guy. Also, he has a pasta blog called “The Al Dente Dentist.” Perfect.

An openly gay police captain who on the outside looks stoic and intimidating, but on the inside is warm, tender, and empathetic, Captain Holt is a complex and memorable character. He’s also the founder of African-American Gay and Lesbian New York City Policeman's Association (AAGLNYCPA) and only eats omelettes on vacation. We love this monotone, expressionless man.

Ben is a lovable nerd and can be serious at times, but his work-oriented nature never wavers when it comes to supporting Leslie Knope. As their friendship blossoms into romance while planning the Harvest Festival, we both learn that Leslie and Ben’s hard work empowers one another, and thus makes for a mature, balanced, loving relationship. We see Ben put Leslie and her dreams first all the way until the end of the series. Men, take notes.

Perhaps this one can be up for debate since Doug doesn’t realize he actually is a feminist until his maid tells him so, but he does take it upon himself to learn about the impending patriarchy. He says to his wife, Claire, “Do you know the word Frida Kahlo? She was a female Picasso, and probably got paid way less.” Then, sporting a “Well Behaved Women Rarely Make History” shirt, he goes to Claire’s boss and demands she gets a raise. It’s ironic in Portlandia fashion because he doesn’t have a job or rarely helps around the house, but for the sake of this article, we say that it’s the effort that counts.

Header photo via Comedy Central; all gifs courtesy of GIPHY

Master Of Clap Backs, Here Are D.W.'S Most Savage Moments

The Prettiots Confess Their Love For SVU, Drop New Single