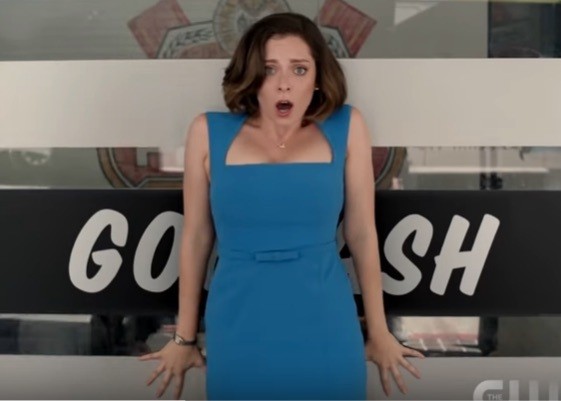 How have we ended up in a situation where both Broad City and Crazy Ex-Girlfriend air their series finale within a week of each other? It’s a cruel moment for people who love feminist television, but should provide us with memorable conclusions. While Broad City took a sweet and loving approach to their ending, it is unclear how Crazy Ex-Girlfriend will conclude, in fact, even the characters are taking bets. In the penultimate episode, Rebecca (Rachel Bloom) is trying to choose whether she’ll date Josh, Nathaniel, or Greg, but it’s unlikely this show’s conclusion will end up being all about Rebecca’s romantic decisions. Although that was the overarching premise of the show, Crazy Ex-Girlfriend has always been much more radical than a typical “will they or won’t they” sitcom. Looking back over the course of the show, we can find radical moments in every season.

1. Josh and White Josh (all seasons)
Right from the beginning, Crazy Ex-Girlfriend broke stereotypes by casting Vincent Rodriguez III as Josh Chan, the Filipino-American leading man. When Rebecca meets Josh’s circle of friends, she is introduced to “White Josh,” (David Hull) another person in the group who is named Josh, but, White. The positioning of Josh Chan as the “default” Josh, with White Josh as the “other,” was radical in flipping the process of othering around. In other shows, the White Josh would be the default Josh, in the same way that men’s basketball is just “basketball.” That White Josh has been named White Josh for all four seasons is awesome. Josh Chan has never left the default position.

2. Getting Bi (Season 1)
In a television landscape where bisexual characters are still often played by young, traditionally attractive women, Darryl (Pete Gardner) is a counter-stereotypical depiction of a bisexual person. He is a middle-aged divorced father. And to be clear, he didn’t get divorced because was secretly gay, and he didn’t dabble in bisexuality on his way to being gay. He’s bisexual. Throughout the series, we see Darryl date a man (White Josh) and a woman in Season 4, because as he explained in Season 1:

3. Paula’s Choice(s) (multiple seasons)
Much has already been written about Paula’s decision to have an abortion in season two, and rightly so. Although it’s important to depict scenarios where women need to have abortions, thereby demonstrating it as an important medical procedure, it’s also important to show abortion as a choice that many women make for other reasons. Paula (Donna Lynne Champlin) is a married, stable, employed mother who learned she was pregnant right as she was planning on attending law school. Her husband and she discussed it, and she decided to have an abortion. This less dramatic but more realistic depiction of abortion shows that women have abortions for different reasons. Paula makes another important decision in season four when she receives job offers from different law firms. According to the conventions of TV, she would give up the higher paying jobs to stay at Darryl’s law firm where she can work with her friends, but this isn’t conventional TV. Paula chooses the highest paying job, and reminds Darryl that they are actual friends outside of the workplace. The reason this is radical is because Crazy Ex-Girlfriend is one of the few shows on TV that regularly talks about money. In Season 1 Rebecca is still wealthy from her days working in a New York City law firm but eventually runs out of money after plotting so many convoluted schemes to impress Josh. Heather, Greg, Paula, and Josh often discuss money; people need to have roommates, find jobs, and nobody lives in a gigantic house. These simple acts play against the default sitcom setting that almost always includes giant houses, chef’s kitchens, and no mention of bills. Paula choosing the job that pays the most, instead of working with her friends, is logical and realistic, and therefore groundbreaking in the world of sitcom lifestyles.

4. Let’s Generalize About Men (Season 3)
Crazy Ex-Girlfriend has done more than most shows to break down the concept of “opposite sexes.” We see characters across different gender identities and expressions experience complicated relationships and emotions. In the Season 3 song “Let’s Generalize Men,” the characters reinforce (and thereby deconstruct) essentialist ideas about gender and sexual orientation. Perhaps the most radical component of the song is that by highlighting stereotypes of masculine gender norms they not only demonstrate how polarizing these images are, but they also break through deep-seated benevolent sexist assumptions that women are somehow better and purer than men (an argument often used against women when we’re not more pure or better).

5. Rebecca’s Mental Health (all seasons)
Crazy Ex-Girlfriend has always been a show about mental health; it is titled “Crazy Ex-Girlfriend,” a term they recognize is problematic in the season one theme song, and Rebecca’s story for the past two seasons has revolved around recognizing and working on her mental health issues. That the whole show is premised around her Borderline Personality Disorder and infatuation with Josh, and the subsequent fallout from the infatuation, is radical enough. But if you add in the realistic depiction of relapse, depression, suicide, therapy, more relapse, and medication, Crazy Ex-Girlfriend accomplishes something we’ve never seen in a sitcom before. Even after Rebecca has been diagnosed with BPD, been through therapy, and is embarking on a healthier relationship with Greg (Santino Fontana/Skylar Astin), her obsessions with going to a water park with a boyfriend, sends her in to a spiral that ends with her sleeping on a bench outside of her psychiatrist’s office. Because even though she spiraled, she was now aware enough to recognize the spiral and seek immediate help. That portrayal of self-awareness, seeking help, and working through the issue again, is one that needs to be shown on TV. In the following episode, Rebecca struggles with the idea of taking anti-depressants, but it turns out that “Anti-Depressants are So Not a Big Deal,” so Rebecca complies. And it doesn’t automatically cure her BPD! There are side-effects; she’s tired, and it takes a while to adjust to the dosage. But, Rebecca does adjust, and the balance of therapy and medication is the most effective course of treatment for her, as it is for most people. Rebecca will probably spiral again, but she has the tools in place now to recognize that it’s happening.

6. Guys Have Problems Too (all seasons, but especially 3 & 4)
One of the more refreshing aspects of the show has been that the men also have emotions, are conflicted, make a range of good and bad decisions, are insecure, and have complicated friendships. By season four Josh Chan has entered therapy, Darryl has become a single father, Greg has gotten sober, and Nathaniel (Scott Michael Foster) has opened up about his mother’s mental health issues. All of their character traits that were once played for laughs in the earlier seasons–Josh’s vapidness, Darryl’s neediness–have evolved into important and realistic human portrayals. Once again, the show helps break down polarized, binary ideas of gender roles and norms, and intersects gender with race, sexual orientation, and social class throughout the series. As Nathaniel, Josh, and White Josh sing:

7. Yeast Infections, Heavy Boobs, and Period Sex (all seasons)
People with vaginas know that vaginal health is important and sometimes unpredictable. A Season 4 episode was devoted to yeast infections, bacterial vaginosis, and the musical “Cats.” A reoccurring tune throughout multiple seasons was about “period sex,” and acknowledged that period sex exists and that it too, is reoccurring. “Heavy boobs” was an ode to people with those heavy, sweaty, dense, un-mammogramable boobs. “The sexy getting ready song” explained how hard it is to try to harness it all in. Taken together, Crazy Ex-Girlfriend explored the complicated, messy, great female body in the same way it explored identities. Nothing is polarized, nothing is perfect. Rebecca Bunch is not fat, and she also has heavy boobs and thighs that touch, in contrast to many other women in sitcoms. That shouldn’t be radical, but it is because the thin ideal is still the primary default. Rebecca, Valencia, Paula, and Heather all had different body types, but they all most likely had period sex and yeast infections. And that’s fine, because that’s how the female body often works, and to not only admit it without shame or apologies but to also sing about it, is radical.

8. JAP Battle Reprise (Season 4)
Near the end of the series, Rebecca is called to help her lifelong nemesis, Audra (Rachel Grate), out of an emotional spiral. As Audra puts it, she herself is “pulling a Rebecca Bunch.” After working through some issues the two women are able to become friends, and admit that they admire each other in a reprise of “JAP Battle” from Season 1. In the original battle the characters recognize that the term JAP can be offensive:

In the reprise, they go farther, acknowledging why they use the term, and how they’re appropriating rap battles,

Rebecca explicitly talks about being Jewish throughout the entire series; this is a core part of her identity. Rebecca’s religious background is front and center, and she continually both reinforces and breaks stereotypes about Jewish women, creating a fully realized three-dimensional portrayal of a complex woman who is Jewish, has Borderline Personality Disorder, and loves musical theater–which is radical. To walk the line between reclaiming and breaking stereotypes at the same time is a tricky balance–one that currently done quite well on Black-ish and Fresh off the Boat – and one that’s been allowed for white male characters ever since the birth of the anti-hero. The season four theme song sums Rebecca up best:

“She's spunky, she's sweet, a generous friend
Oh, but there she looks kinda mean
Okay, she's snarky, sarcastic, and a ... what?
You know, we're not really seeing a common theme
Meet Rebecca!
She's too hard to summarize”

So how will it end? The previous episode led us to believe that Greg is the man that Rebecca would be happiest with in the long term, in a real, non-fantasy relationship. But the show has also led us to believe that there is much more to Rebecca’s story than the man she loves. So, she might end up choosing herself, or she might up choosing Greg (obvs), or she might end up doing something else. If she does choose a boyfriend I hope that it’s resolved in the first five minutes of the episode so that we can spend the remainder of our time in the world of West Covina taking in the bigger picture one last time.

What "Crazy Ex-Girlfriend" And "You" Got Right About Overdosing

Bettina Spencer is an Associate Professor of Psychology, and Chair of the Department of Gender & Women’s Studies at Saint Mary’s College, Notre Dame, IN. Her research investigates issues at the intersection of classism, sexism, and racism. She co-hosts the podcast “The Brain Has Eyes.” You can also find her work at https://bettinaspencer.weebly.com