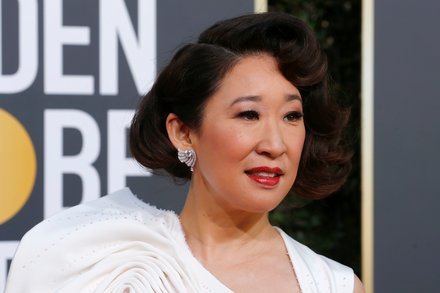 This past weekend Golden Globe award winner Sandra Oh, star of the BBC’s Killing Eve, hosted Saturday Night Live. She is the third Asian woman (fifth Asian person overall, including Aziz Ansari and Kumail Nanjiani) to host in the show’s 44 year run. Following Awkwafina, who hosted back in October, Oh dazzled as the season’s second female Asian host last Saturday night, showing off her comedic chops in multiple skits. Both women follow Lucy Liu, who hosted 18 years ago back in 2000.

With an impressive resumé including a nine year long run as Dr. Cristina Yang on Grey’s Anatomy, supporting roles in films like The Princess Diaries, Sideways, and Hard Candy, as well as a recent turn as a leading lady in 2017’s Cat Fight, it’s a wonder why Oh hasn’t hosted yet.

The episode highlighted Oh’s outstanding comedic skills, ones she employs as Eve Polastri in Killing Eve. From her satirical impression of a costume drama heroine caught in an ill-fated love triangle in the skit The Duel to her performance as a crass, over-the-top future girlfriend named Tishy of an insecure teenage boy in Future Self, Oh had audiences laughing (for all the right reasons) and applauding her work on the show. She and the other talented female cast members of SNL performed as femme fatales and suspicious widow archetypes in Cheques.

Oh’s turn as a host marks another great stride for Asian representation in western media. With last summer’s box office hit Crazy Rich Asians, the popular Netflix film To All the Boys I’ve Loved Before, Ali Wong and Randall Park’s upcoming film Always Be My Maybe, Oscar-winning short film Bao, and Gemma Chan’s Jane Austen inspired short film Mr. Malcolm’s List (which has just been green-lit for a feature length adaptation), Asian representation is at an all time high in Hollywood history. SNL’s spotlight on Asian actresses and comediennes is another step forward for the community.

As SNL’s latest episode came to a close, Oh stood amongst the cast members with a wide smile, wearing a black t-shirt. On it read her incredible quote from the 2018 Emmys: “It’s an honor just to be Asian” - Sandra Oh. This past year has seen great progress for allpeople of color, possibly most notably for Asians in western media. With cemented star power, Oh is living proof of and leading the way to the bright future for all Asians in entertainment.