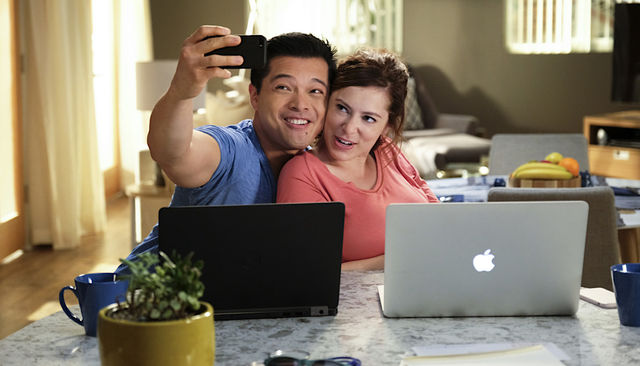 It’s been an incredible run for Crazy Ex-Girlfriend, which ends this April after four truly remarkable years of groundbreaking television. For the uninitiated out there, the series has a "zany romantic comedy" premise: unhappy, NYC-based real estate lawyer Rebecca Bunch moves across the country to strip mall suburb West Covina, California (two hours from the beach, four in traffic) with the hopes of winning over her ex Josh Chan, who she dated for two months at a summer camp when they were sixteen. Plus—surprise!—there’s at least two original songs per episode!

Rachel Bloom not only stars in the show, but she also co-created it (along with Aline Brosh McKenna), co-produces it, and co-writes some of the scripts and almost all of the musical numbers (which she also performs herself, along with the rest of the ridiculously talented cast). The wildly innovative show has staunchly refused to be bound by any label, certainly not those of “rom-com” or “musical.” So it’s no surprise that, upon reflection, the show has not just been feminist in its messaging or characters, but it's also subverted gender stereotypes while simultaneously deconstructing societal expectations of men and women.

The show quickly skewers conventional ideas starting with its first season credits, calling out “crazy” as a “sexist term” and describing the situation as “a lot more nuanced than that.” In its very first episode, while preparing for a date, Rebecca sings the “Sexy Getting Ready Song,” a sultry R&B number that quickly goes from very hot to very not. With a literal bloodbath on Rebecca’s hands, it hilariously illustrates that while society has certain standards of beauty for women, the process of getting there can be anything from uncomfortable to downright painful. A rapper steps in to add his part to the song, but in the middle he takes one look around and is instantly aghast. “This is how you get ready?” he asks. “This is horrifying, like a scary movie or something, like some nasty-ass patriarchal bullshit.”

The character of Rebecca is intelligent, bold and complicated (“too hard to summarize!” as the fourth season credits cheerfully declare): qualities traditionally associated with TV's male protagonists. While Rebecca does leave her high-profile NYC job in the pursuit of love, the subject of her desire is an easygoing nice guy without a ton of book smarts—but he sure is hot! This has typically been the realm of the female love interest in media, and it’s nice to see the tables turned, especially with an Asian actor in this role.

Rebecca also unabashedly embraces her sexuality in a way that traditionally has been the terrain of men. While she does prefer love to factor into her sexual experiences, she wholeheartedly enjoys sex without this being portrayed as a flaw in her character. When she sings about her hope in imminently receiving a mental illness diagnosis, she shares that one time a naturopath called her predilections sex addiction, but that she knew it wasn’t. “Yes, I like penises,” she sings, “but who doesn't?”

Female characters in the show also talk about sex without fear of reproof. Women take the discussion out of the shadows and into the office. And besides that very series (The Office), Crazy Ex-Girlfriend was the first show on network TV to utter the word “clitoris,” and the first show, period, that explained how it’s vital to the way women receive pleasure during intercourse.

Women aren’t immune to criticism either, as they’re portrayed as being occasionally quick to rush to judgment about guys. In “Let’s Generalize About Men,” the women of the show engage in the classic alcohol-induced bonding ritual of disparaging all straight men (and lauding all gay men). When Rebecca’s best friend Paula realizes that she has sons and that these blanket statements affect her own family, Paula’s brightly told that her “sons are gonna be rapists!”

What also sets the show apart is the obvious empathy it has for its characters that are subverting these stereotypes. The universe Bloom has created is populated by an effortlessly diverse cast of characters. Some start out as one-note archetypes, but they are fleshed out and grow over time to defeat any misconceptions we may initially have of them.

Rebecca’s boss, Darryl, is a touchy-feely middle-aged guy into exploring the inner depths of other people’s souls. When it comes to himself, however, he can be a little delayed in identifying what he really is feeling—or even who he loves. A breakout moment for him is his realization that he is bisexual, and embracing that identity is important for him and for the show itself, bringing visibility and understanding to an often misunderstood sexual orientation.

Darryl is also a loving, caring father who will go to bat for the daughter he loves any day of the week. His wife was an absent mother who had an affair while her child was left to her own devices, and Darryl will resort to anything, including compassionate compromise in the form of joint custody, to properly support his daughter.

In another gender role reversal, Rebecca’s friend Heather eventually dates Josh’s friend Hector, and Heather is the one who scoffs at the idea of a traditional wedding ceremony, favoring a pragmatic path to marriage so Hector can access her health insurance over any superfluous celebrations. Hector is the one who is excited about celebrating with their family and friends, but concedes to Heather’s wishes. Ultimately, Heather gives Hector the dream wedding he wants because she loves him and wants to see him happy, illustrating that not all girls dream of having a fancy wedding, and that they can grow up to be women who can share in the dreams of their partners—and also help provide for them.

Later in the series, Rebecca's new boss, Nathaniel, is basically the opposite of Darryl: a stereotypical macho jerk who refuses to indulge in any self-reflection or examination of emotions of any kind. As time goes by, Nathaniel is confronted with the realities of his childhood trauma and fraught relationship with his father and, after a break-up, takes a moment to feel his feelings in "Fit Hot Guys Have Problems Too,” where he (with some other fit hot dudes) pauses to “ugly cry.”

I’d be remiss if I didn’t mention one of the show’s most signature—and most lauded—features: its portrayal of mental illness in a touchingly realistic way. While women are constantly shown throughout pop culture as acceptably "crazy" in the face of love, Bloom interrogates this idea throughout her series, and does so most succinctly in her season two theme song “I’m Just a Girl in Love.” In it, she sings, “I can't be held responsible for my actions. I have no underlying issues to address. I'm certifiably cute and adorably obsessed.”

The motivations behind her “crazy” move and being “crazy” in love are actually more complicated than they seem. While she is ostensibly looking for love, in reality, she is searching for societal expectations of happiness in a myriad of forms. From rom-coms to fairy tales, women and girls are constantly told that true love is the answer to happiness—and when it comes, your problems are instantly and permanently solved. Rebecca constantly is a victim to this mode of thinking, but eventually discovers that her own persistent search for romantic love, familial love, and job satisfaction won’t ever be truly realized or make her happy until she fundamentally addresses her own issues and deals with them consistently and effectively.

Through this arduous process of wellness, Rebecca commits crimes, lives in denial about her need for treatment, and spirals deeper and deeper until she attempts to commit suicide. An innovative feature of the show is how it recognizes that wellness isn’t a one-stop shop. It takes openness, communication, collaboration, shared support, multiple modes of therapy and sometimes medication to treat her personality disorder. And once Rebecca recognizes what needs work and accepts it, she can’t simply work toward it temporarily and automatically be better. I love how the show compares the recovery process to working out—you can’t commit to exercise for a year and then expect to be fit for the rest of your life. In the same vein, you can’t commit to mental wellness for a short period of time and then take a break and expect everything to be fine. It’s a continual process that doesn't necessarily get easier as you go along, but that’s the reality of life.

Rebecca is painted as a very obviously imperfect character. She is often self-absorbed to the point of obliviousness, has a morally dubious code of ethics (engaging in caper after improbable caper), and makes objectively poor decisions on a semi-regular basis. On the other hand, she’s also an unapologetic feminist who elucidates her progressive values regularly to friends and frenemies alike. In undermining the very premise of the rom-com, the show continues to deconstruct the genre and explore how complex we, as humans, all are.

The show doesn’t shy away from other touchy subjects, such as imperfect parenting and childhood trauma, alcoholism, technological social barriers, abortion, and legal injustice. It deals with them all with a sensitive and delicate touch that most TV shows—especially most comedies—never come close to addressing.

And on top of all of that, there’s glorious original music with each episode. The songs are hilarious and moving with some of the most incisive (and damn catchy!) parodies of the most diverse range of music genres on the planet. (Seriously, I don't think there's a genre of music they haven't covered in some capacity: '70s soul, '80s hair metal, excessively auto-tuned pop, vintage jazz, musical theater, death metal, R&B, pop-punk, battle rap, country ballads, alternative rock, traditional Jewish music, and many—many!—more.)

With Crazy Ex-Girlfriend, Rachel Bloom has created a hilarious cringe comedy, an immensely inventive musical, a trenchant and sociological satire, and an emotionally poignant drama. She has left behind a wildly creative and uniquely progressive body of work that has cemented her legacy as a fiercely feminist icon of the digital age, and I, for one, can’t wait to see the crazy incredible things she does next.

Sing This Song The Next Time You Have Period Sex

Jessica Kramer is a senior events programmer at Working Mother Media, curating content and booking speakers for events in the areas of women's advancement and diversity & inclusion. She is also a freelance writer interested in exploring pop culture, feminism, food and transformative travel. Jessica is based in Brooklyn and can often be found dancing the night away at various indie/alternative DJ nights in the borough, petting strangers' dogs on the street (with their permission) or planning her next incredible trip around the world. Follow her on Instagram @jessica_kramer.