You'll Never Understand "Russian Doll" Until You Understand the 12 Steps 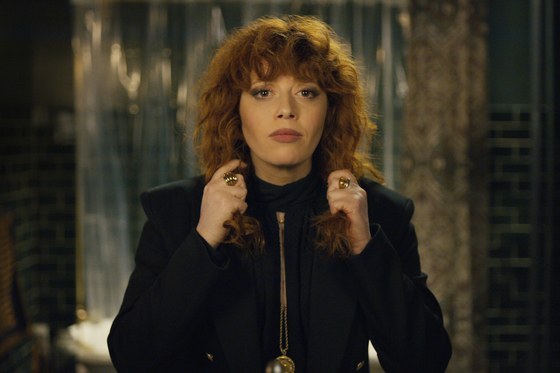 There’s a saying in AA—and used in every other 12-step program as well—that the definition of insanity is doing the same thing over and over again and expecting different results. Obviously, that’s not really the definition of insanity, but what it means to someone trying to get sober is that as long as you keep drinking (or drugging, or binging and purging, or whatever), your life isn’t going to get any better. You can try to control your addiction (aka “white knuckling”), or change other things in your life—going to a different bar; only drinking beer or wine and no hard liquor; ad nauseum—but you’ll still end up in the same exact place you’re trying to avoid: passed out drunk, or high, or bent over a toilet bowl throwing up, or, if you keep it up, dead or in jail. Your life will have become unmanageable, and until you realize that you are powerless over your addiction—that no little life-tweak will make drinking or drugging less dangerous for you—nothing is going to change.That’s the first step after all —”Admitted that we were powerless over (insert addiction here), and that our lives had become unmanageable.”

There’s a saying in AA that the definition of insanity is doing the same thing over and over again and expecting different results.

This is exactly what life is like for Nadia Volvokov, Natasha Lyonne’s character in Netflix’ new highly bingeable series, Russian Doll. Only in Nadia’s case, things are taken to a whole ‘nother extreme: no matter what she does, she just keeps dying. [Caution: Spoilers ahead]. Every new loop begins with her in the bathroom at her own birthday party, and ends with her death, as she keeps looking for ways to make it stop.  She tries to be more careful about crossing the street so she doesn’t get run over;  she takes the fire escape to avoid falling down a flight of steps and cracking her skull open; she puts a sign on a gas stove to keep it from being used and blowing up the apartment she is in. She tries fucking to fill the void, but things always end the same way: she dies. Her life has become the definition of insanity.

Listen to anyone in recovery give a “qualification”—tell the brutal, honest story of the depths of their addiction, how they get sober and what’s happened since then, to a room of other recovering addicts—and you’ll hear the same story over and over and over again. It doesn’t matter their age or gender or sexual orientation or class or race or religion, everyone tells the story of an out-of-control addiction that they thought they could find a way to manage on their own while their life became smaller and smaller, until they finally realize that what  they need is help. There’s another saying in AA, too, which is that once you put down your drug of choice, you end up having to take a good hard look at yourself, and every time you think you’ve got it figured out you realize there is another layer that needs to go before you get down to your true self. In AA, they say it is like “peeling an onion.” I suppose another way to look at it would be that you are unpacking a Russian doll: removing layer after layer of bullshit until you get to the core of who you are.

It’s no secret that Natasha Lyonne herself has been through the depths of hell with a long-running heroin addiction, and despite losing a promising acting career, she just couldn’t give up the drugs. We get a glimpse into what that time in her life must have been like with the time-lapse selfie-cam view of her night of drugging and drinking at her birthday party—with a sniff sniff here, and a glug glug there, it’s a non-stop orgy of self-medication and self-destruction. Happily, Lyonne eventually did  get sober (with the help of a 12-step program), and little by little, her life, and her career, has come back. She’s had a starring role on Orange is the New Black, and now, with the Netflix hit dramedy Russian Doll, she’s poised to become an even bigger star.

The way that all 12-step programs work is ingeniously simple: all it takes is talking to someone else who has been through what you’ve been through, and who understands. You turn your life over to a “higher power”—which could be God or just AA itself—and stop trying to control everything. Then, together with other addicts in recovery, you save each other.

Although they love her, neither Nadia’s friends nor therapist/Aunt Ruth can save her from herself. They just can’t understand what she’s going through. And so Nadia’s life doesn’t start to get any better until she meets Alan, a young man who is in the exact same situation as she is: he just keeps dying. A control freak of a guy who lives a spartan life of white shelves, regimentally organized DVDs and an equally regimented workout routine, he listens to self-help tapes and repeats mantras like “I am deserving of  love.” Nevertheless, the one thing he can’t control is that he keeps dying. He’s “white knuckling” it, thinking he’s just one clue away from getting things right, but that’s where he’s wrong. As long as he keeps trying to change things all by himself, it ain’t gonna happen.

The way that all 12-step programs work is ingeniously simple: all it takes is talking to someone else who has been through what you’ve been through

But although the two are sharing notes on their parallel experiences, they still aren’t able to escape the loop of reliving the same day over and over, and then dying. And as time goes on, they find themselves losing more and more friends; holding onto less and less of their lives—exactly what happens in the later stages of an addiction. Then, finally, they  realize the key to their survival: letting someone else save them from themselves. And so Nadia keeps Alan from going over the edge, literally, and Alan keeps Nadia from getting run over. They’ve given up control and turned their lives over to the care of God “as we understood him.” They’ve stopped trying to fix things all alone. Along the way they’ve “peeled the onion” (unpacked the dolls), becoming willing to take a strong hard look at  the root of their pain—with each other’s help, of course, as it’s done in AA. When Nadia sits in on Alan’s confrontation with his girlfriend, Bea, she is able to protect him, and add another voice to the conversation, beside the one in his own head. They are acting as each other’s higher powers, or maybe just sponsors—helping each other see thing more clearly.

Elements of many of the other twelve steps —making a searching and fearless moral inventory of ourselves; admitting to God, ourselves, and another human being the exact nature of our wrongs; making a list of people we had wronged and were willing to make amends to them all; continued to take personal moral inventory of ourselves, and when we were wrong, promptly admitted it—can also be found in the series. Even the last step—”having had a spiritual awakening as the result of these steps, we tried to carry this message to alcoholics and to practice these principles in all our affairs”—is hinted at in Nadia's relationshp to the homeless man in Tompkins Square Park. His name is "Horse"—aka heroin—and he looks so familiar to her from the first time she sees him because he is her, before sobriety. And now she’ll finally be really able to help him, too.

Of course, the journey to sobriety via the 12 steps isn’t the only story at the heart of Russian Doll—like the dolls themselves, it has many layers, which is why it is such a satisfying and fulfilling watch. But at its center is Lyonne’s own heartbreaking battle with addiction, and her eventual recovery. Like Nadia, she has stopped dying, and has rejoined the living. And that’s something for which we can all be grateful.

Anne O. Nemas is the pen name of a regular contributor to BUST. On Feb 11, 2019, she will be celebrating 29 years of sobriety.