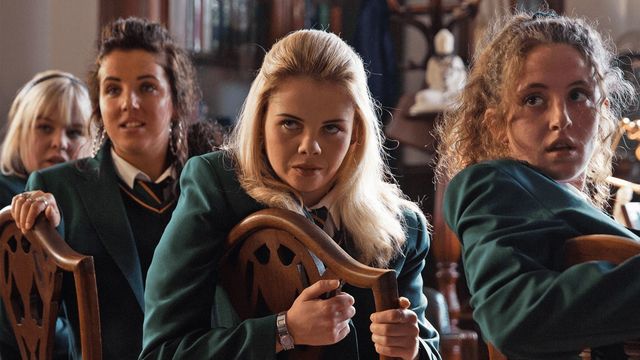 In December 2018, US Netflix released the UK-hit series Derry Girls, and it has since attracted a worldwide viewership.

Set in Derry, or Londonderry, “depending on your persuasion," in Northern Ireland in the early 1990s, the show follows teenagers Erin, Clare, Michelle, and James (Michelle’s British cousin) on their adventures. While teenagers getting into trouble is a well-worn TV trope, Derry Girls convinces because it tells a local story with universal appeal, and puts teenage girls front and center.

The show taps into '90s nostalgia, as evidenced by its soundtrack, which includes the Cranberries (especially poignant after Dolores O’Riordan’s passing in 2018); '90s hairstyles; hoop earrings; references to Pulp Fiction (the source of Michelle’s favorite word, “motherfucker”); Macaulay Culkin’s emancipation; and the girls dancing in formation to Whigfield’s “Saturday Night."

Yet, the show mixes pop culture nostalgia with the reality of life in the '90s in a small town in Northern Ireland, far away from the glitter of Beverly Hills 90210, or the coolness of Bel-Air. Instead, the girls speak local dialect (and make fun of James’ British accent). We get to see various views of the city and its landmarks, including a shot showing the crossing out of the “London” in Londonderry. Weekly routines in people’s lives—such as the mathematical precision of preparing a Friday night order of fish and chips, or Ma Mary’s refusal to wash a half-load of laundry—localize the show in working-class Derry.

Most important, however, is that the show centers on young women, their hopes, dreams, and anxieties. The protagonists in Derry Girls are not “nice” girls. They are dramatic (Erin), foul-mouthed (Michelle), anxiety-ridden (Clare), and quirky (Orla). They fight, squabble, and sometimes let each other down: When her best friend Clare confides to Erin that she is lesbian, Erin’s initial reaction is to tell Clare to “get back in” [the closet]. (They ultimately make up and support each other.) The girls’ adult counterparts, Ma Mary, Aunt Sarah, and Sister Michael (the cynical head nun of the Catholic school) are likewise strong, complex characters.

Derry Girls speaks to something audiences have been waiting for: comedy about women, without them being the butt of the joke. Moreover, the show provides another perspective of the Troubles. While most representations of the Troubles are dramas about young men having to take sides (such as Adrien McKinty’s crime novels, Bernard MacLaverty’s Cal, or the US film The Devil’s Own), Derry Girls presents a female version of history. Choosing comedy to tell a story, creator and writer Lisa McGee not only shows the tension between normalcy and state of exception, but she highlights the necessity of laughter and fun. In Derry Girls, relief from tension is found in comedy. The show begins with a bomb threat, which closes down the local bridge. More inconvenienced than horrified, everyone gets on with life. And while the focus of the show is on the girls, the Northern Ireland conflict is always looming, and slowly becomes more important to the plot—for example, when Erin's family has to decide what to do with the “wee RA man” (an IRA member) who hid in their trunk to secretly cross the border. The show ends by juxtaposing images of the girls and James dancing onstage at the school talent show, celebrating their friendship, with the rest of Erin's family standing shocked in front of the TV, listening to the news of a bomb killing several people

However, the strength of the show is not only the mix of universal appeal and localness, but its timeliness. Twenty years after the Good Friday agreement, suicide rates and PTSD are higher in Northern Ireland than anywhere else in the UK. And even though we have come a long way when it comes to LGBTQ+ acceptance and representation, Clare would still be unable to get married today, as Northern Ireland still does not allow gay marriage. Moreover, the messiness of Brexit makes the future of Northern Ireland uncertain again. Yet, Derry Girls reminds us that there is resilience in laughter, and that comedy can help us cope with pain.

Tags: Derry Girls , TV , TV review , Netflix
Support Feminist Media!
During these troubling political times, independent feminist media is more vital than ever. If our bold, uncensored reporting on women’s issues is important to you, please consider making a donation of $5, $25, $50, or whatever you can afford, to protect and sustain BUST.com.
Thanks so much—we can’t spell BUST without U.