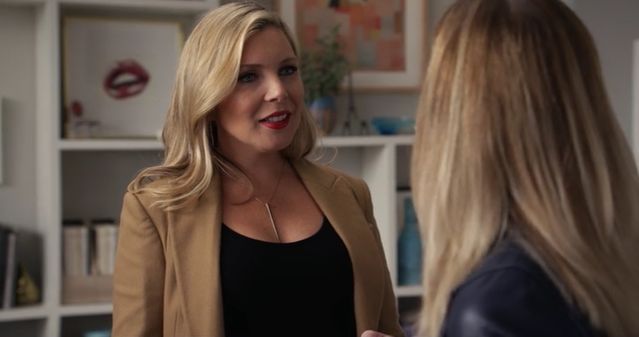 June Diane Raphael has a lot going on right now. In 2018, the actress, writer, and producer co-founded a co-working space for women; she has a film coming out this June with Charlize Theron and Seth Rogen; and she's currently working on a book for women looking to run for office, out this September. And—of course—there’s Season 5 of Grace and Frankie, the show starring Raphael as Brianna, the snarky, CEO daughter of the titular Grace (Jane Fonda), returning to Netflix this weekend.

“There’s a tension between Brianna and Grace that exists in the cosmetic company, Say Grace, that [Brianna] takes over. You’ll see in this season that Grace comes back to ‘help,’ in quotation marks, and I’m really excited for people to see how that grows and develops. I think you see a different side to both [Brianna and Grace], and what this business means to both of these women,” Raphael tells BUST. There’s also, she mentions, a lot more of Barry (Peter Cambor), the Say Grace accountant who gradually becomes Brianna’s serious boyfriend. “You get to see what this relationship is doing to Brianna and how being in a long-term, committed relationship is completely terrifying for her.”

Grace and Frankie has generated a lot of buzz the past several years—the show is hilarious, but also depicts the importance of female friendship and, as Raphael says, non-traditional familial relationships. “You’re seeing Grace and Frankie in the later years of their lives, creating a home that is outside the norms of society, outside the options that we think we’re given,” she says.

Recently, viewers have also seen Grace’s other daughter, Mallory (Brooklyn Decker), find herself in unfamiliar terrain after leaving her husband. “I think what’s interesting about both Brianna and Mallory is that now they’re both in vulnerable places. Having a boyfriend, for Brianna, is the scariest state to be in. And Mallory is single, and that’s equally terrifying for her,” Raphael says.

Raphael’s character has been a fan favorite since the show’s first season aired in 2015. “I think what people have really responded to about her is seeing a woman very boldly live her life unapologetically, and with humor and humanity, in her own way,” Raphael says. “I also think portraying a woman who’s in her thirties and doesn’t want to have kids and is choosing a different lifestyle, one there’s a lot of stigma attached to, has really connected to a lot of people.”

Brianna is also many things—entrepreneurial, witty, a little brazen—but she isn’t nice, which, Raphael says, speaks to her. “As I get older and older, I’m not interested in being nice. I get very tired of the idea of, ‘Oh, she’s a strong female character. She’s empowered and this and that,’” she says. “Women are flawed and human and deeply interesting because of it. Those are the characters I respond to, and that’s the type of work I’m interested in.” 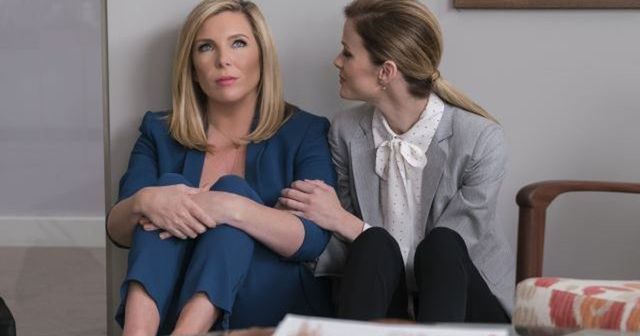 Photo via Netflix / Grace and Frankie

The idea that women shouldn’t have to be sweet in order to be respected is one that Raphael advocates for offscreen, too. Specifically, she wants to change the way we view motherhood and raising children. “I think motherhood needs to be seen as a political force, and not a saccharine, sweet sacrifice we all do—but an important and valued part of our lives,” she says.

Raphael has two young children, and the older was only ten weeks old when she started filming the first season of Grace and Frankie. “I was in the throes of being a new mom and entering a new workforce and having to really navigate that. And as a white woman, I think I’ve lived a very privileged life, and I’ve had many privileges—through no merit of my own—that I’ve enjoyed,” Raphael explains. “For me, it wasn’t until motherhood that the patriarchal system was so crystallized.”

It was then that Raphael began to notice how many industries were not built to support working mothers, which inspired the initial idea for the Jane Club, a clubhouse with conference rooms, communal working spaces, exclusive programs and events, and affordable childcare in-house. “It is a space that’s been created for women, and I think when we look around, most spaces were not,” Raphael says. “I also think it’s incredible to see men come into our space, because I believe that it’s so valuable and important for men to come into a space that has been designed for women, and to see the difference.”

When creating the Jane Club, Raphael wanted to evoke the idea of the village—of, if you have the means, reaching out for help and support when raising a child. “It has been a really intense year,” she says when I ask how she made time for it all—Grace and Frankie, her upcoming film, her forthcoming book. “But I’m also lifted and supported by this incredible woman. I have a full-time nanny, and she’s incredibly important to me. I really value domestic workers and their rights, and their place in our lives, and the work that they do.”

Accepting and acknowledging this support, Raphael says, is paramount. “I wish more women would talk about the help in their lives,” she adds. “I think that a lot of women my age have been plagued by this phrase of having it all and doing it all, and I actually find it kind of reckless and irresponsible to tell women that’s possible without creating any institutions and infrastructure that can actually help that.”

Raphael’s book, Represent: The Woman’s Guide to Running for Office and Changing the World, will also aim to support women: specifically, women running for office. She wrote the book with her friend Kate Black, the former chief of staff at EMILY’s List, and it will include everything from a guide to elevator pitches to pep talks to advice from prominent women already in office.

Grace and Frankie’s fifth season will be available to stream on Netflix on Friday, January 18.

Tags: June Diane Raphael , Netflix , Grace and Frankie , The Jane Club , EMILY's List , June Diane Raphael , Grace and Frankie , Netflix
Support Feminist Media! During these troubling political times, independent feminist media is more vital than ever. If our bold, uncensored reporting on women’s issues is important to you, please consider making a donation of $5, $25, $50, or whatever you can afford, to protect and sustain BUST.com. Thanks so much—we can’t spell BUST without U.

When Mickey Guyton Sings, We Listen