For Megyn Kelly, Blackface Is Okay, A Black Santa Is Not 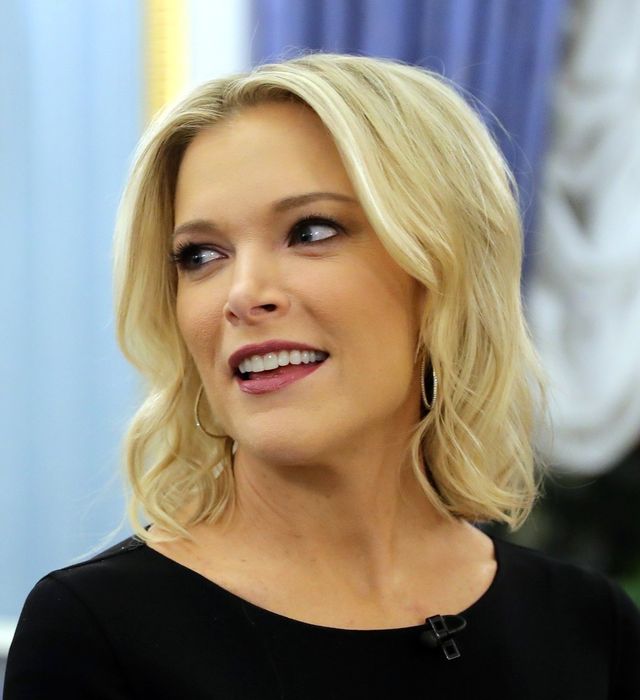 Megyn Kelly is at it again: being racist, that is. During a Tuesday taping of her show “Megyn Kelly Today,” Kelly and a panel of three other white people, Melissa Rivers, Jenna Bush Hager, and Jacob Soboroff, discussed racial sensitivity with regard to Halloween costumes. It didn’t go well.

“But what is racist?” asked Kelly before continuing, “because truly you do get in trouble if you are a white person who puts on blackface at Halloween or a black person who puts on white face for Halloween. Back when I was a kid, that was okay as long as you were dressing up as a character.”

Kelly, who was born in 1970, also defended Real Housewives of New York City Bravo-lebrity Luann de Lesseps, who was accused of wearing blackface when she dressed up as Diana Ross for a Halloween party that was filmed for season 10 of the reality show. “Who doesn’t love Diana Ross?” asked Kelly, in desperate attempt at bringing levity to the conversation. “She wants to look like Diana Ross for one day, and I don’t know how that got racist on Halloween. I can’t keep up with the number of people we’re offending just by being normal people,” Kelly concluded.

It wasn’t long before Kelly’s comments unleashed a social media firestorm. Comedian Patton Oswalt took to Twitter to explain that he and Kelly are about the same age and that blackface was never okay when they were kids. 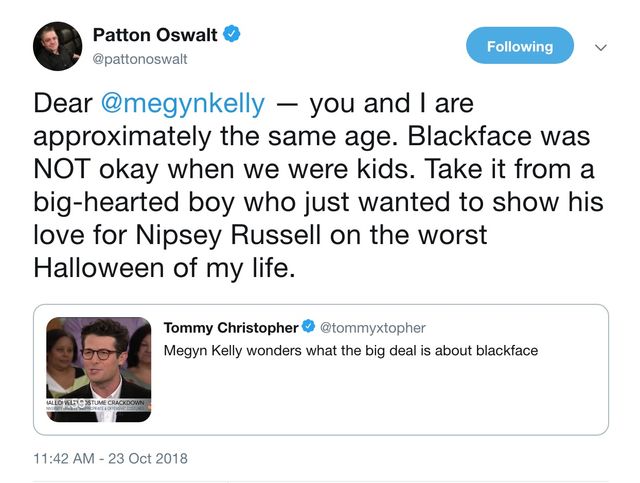 Padma Lakshmi condemned Kelly’s ignorance saying she needs to educate herself on social issues given her national platform. 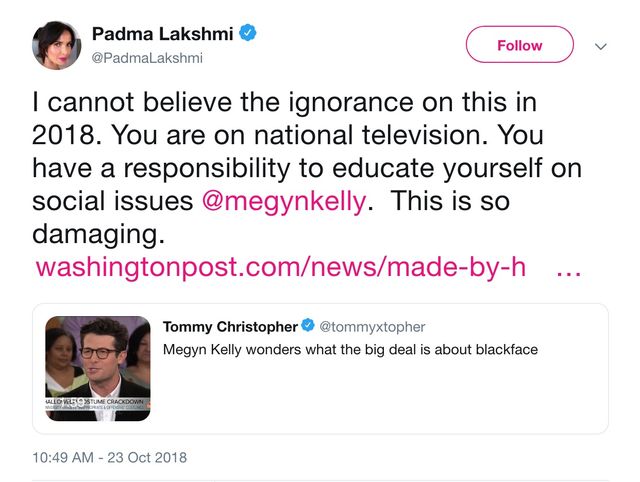 Comedian Patrick Monahan’s response on Twitter referenced a 2013 Fox News segment (remember she used to work there?) in which Kelly assured viewers that Santa and Jesus are both very white. 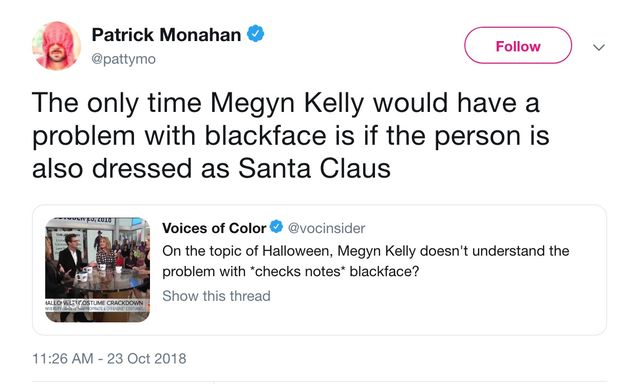 Kelly later apologized for the comments in an email to colleagues saying, “I’ve never been a ‘PC’ kind of person—but I understand that we do need to be more sensitive in this day and age. Particularly on race and ethnicity issues which, far from being healed, have been exacerbated in our politics over the past year. This is a time for more understanding, love, sensitivity and honor, and I want to be a part of that. I look forward to continuing that discussion.”

Dear Megyn Kelly, blackface is wrong. End of discussion. There’s no dialogue here. Blackface has a long history of dehumanizing black people and reinforcing harfmful notions that they’re inferior. So if you want to be part of more understanding, love, sensitivity and honor, maybe consider being more of a “'PC' kind of person.”

When Will #MeToo Affect Trump's Presidency?

What My Godfather Taught Me About White Privilege

Tags: megyn kelly , racism , halloween , costumes , cultural appropriation , blackface
Support Feminist Media!
During these troubling political times, independent feminist media is more vital than ever. If our bold, uncensored reporting on women’s issues is important to you, please consider making a donation of $5, $25, $50, or whatever you can afford, to protect and sustain BUST.com.
Thanks so much—we can’t spell BUST without U.