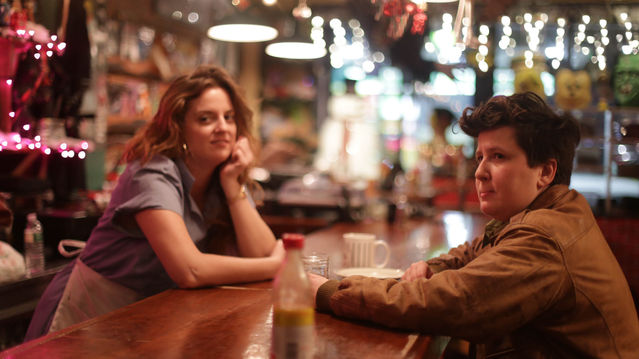 Dinette, a webseries that premiered earlier this month on BRIC TV, is a perfect way to spend an hour of your time. The series revolves around a group of quirky women and nonbinary friends all trying to make it through the world in their own way—the only cis male characters are peripheral and appear briefly. The pace matches its primary setting well (relaxed and cozy, as if your best friends are sitting beside you at your favorite diner counter). One of the first lines is the perfect introduction to the series: "You know how I said I was watching Reservoir Dogs? And the men, they just talk and talk and talk? I was just thinking, why isn't there a film where the women talk a lot, you know?" 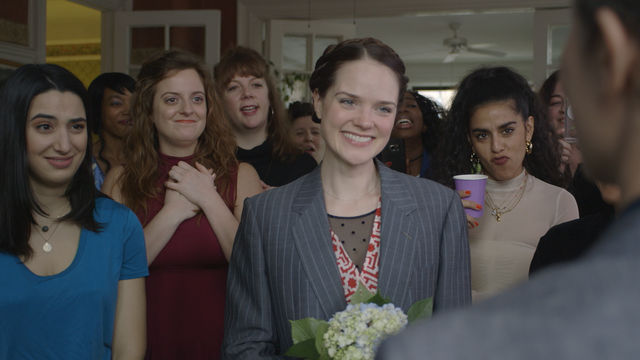 This show is practically drama-free—in a good way. The characters support each other, apologize swiftly when mistakes are made, and hold their ground. For example, in the first episode, nonbinary character Jaq (Jude Dry) continually has to remind their friends that they are no longer going by “Jackie." Sheila (Melissa Dougherty) spends all six short episodes planning her marriage to herself, and explaining her reasons to her sister, who is uncomfortable with the idea. “I looked at my life and saw all these missed opportunities and lost potential and all these ways in which my voice had been stifled," Sheila says. "Not only that, but all these ways in which I had stifled my own voice. And I just—I wanted to say that that ends today, that ends here." Or look at Norah (Maeve Higgins), who has some of the best lines in her role as the raw, maybe-depressed woman who struggles with her profession as a comedian and her reality as an immigrant.

Written and directed by Shaina Feinberg, Dinette is impressively gentle, funny, and relatable. All-in-all, supporting this show is a great way to smash the patriarchy from your bed. It's uplifting, original, and daring. Watch the full series on BRIC TV.

Tags: feminism , webseries , Shaina Feinberg , queer , TV , Maeve Higgins
Support Feminist Media!
During these troubling political times, independent feminist media is more vital than ever. If our bold, uncensored reporting on women’s issues is important to you, please consider making a donation of $5, $25, $50, or whatever you can afford, to protect and sustain BUST.com.
Thanks so much—we can’t spell BUST without U.