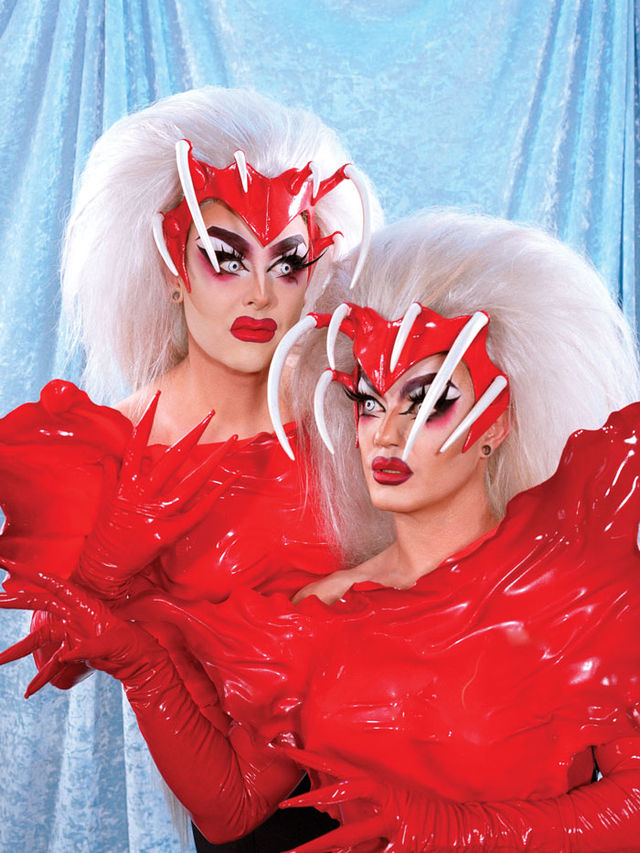 Dracmorda (left) and Swanthula, aka the Boulet Brothers, are the evil masterminds behind Dragula: Search for the World’s Next Drag Supermonster. The competition show, now entering its third season, is based on three principles: filth, horror, and glamour, and it’s inspired by the pair’s long-running drag nights that have been thrilling audiences in L.A. and San Francisco for years. Available on YouTube, the show challenges contestants to combine their drag skills with gruesome special effects, and punishments for losing a challenge range from being buried alive to getting surface piercings with giant needles. Standard renditions of feminine beauty take a back seat to shock value on Dragula, and if you want to take home the prize, you’d better be able to create a perfectly blended contour and simulate blood-gushing wounds.

“We were always into punk and goth and video games,” explains Dracmorda. “When you combine those elements with horror and John Waters and glamour and the grungy underbelly of city living, that’s what we think drag is. That’s where all of that artistry comes together in a very real, visceral way.”

The Boulet Brothers and the contestants of Dragula Season 2

Not to be outdone by their super-creative contestants, the Boulets are often the ones serving up the show’s most memorable lewks. Dracmorda and Swanthula always dress in identical creep couture when in character, and their signature ensembles—featuring skin-tight latex, needle-sharp fingernails, and massive headpieces—are all the products of the pair’s wild imaginations. “We design everything,” says Swanthula. “There is some stuff we are better at than others. For example: wigs. I have a rudimentary understanding of them. I can do some shapes. But some of the crazier stuff we have fabricated. It’s the same with the hats. We make some, but when they are really involved we have a girl we work with.”

The Boulets are very hush-hush about their personal lives and prefer not to reveal their real names, ages, or any other off-stage details. They do, however, admit that they aren’t really brothers at all, but are actually a couple who’ve been together for a very long time. Both are self-described “queer weirdos” who, even within the gay community, have always been outside the dominant culture. And while RuPaul was recently criticized for saying he did not want transgender women who had started gender affirmation surgery on Drag Race (he has since apologized), Dragula has always been open to all queer contestants. “They can be trans, they can be drag kings, drag queens, we don’t care what people are,” says Dracmorda.

The pair often tours with their posse of “uglies,” so keep an eye on Twitter (@BouletBrothers) for live dates near you. And if you’re in L.A. on October 27, their annual Halloween Ball should not be missed. “It’s three floors,” explains Swanthula. “It’s a haunted house in a huge nightclub and it’s interactive—there’s trick-or-treating and pumpkin carving and monsters and shows and just craziness!”

Tags: Boulet Brothers , Dragula , Search For The World's Next Supermonster
Support Feminist Media!
During these troubling political times, independent feminist media is more vital than ever. If our bold, uncensored reporting on women’s issues is important to you, please consider making a donation of $5, $25, $50, or whatever you can afford, to protect and sustain BUST.com.
Thanks so much—we can’t spell BUST without U.