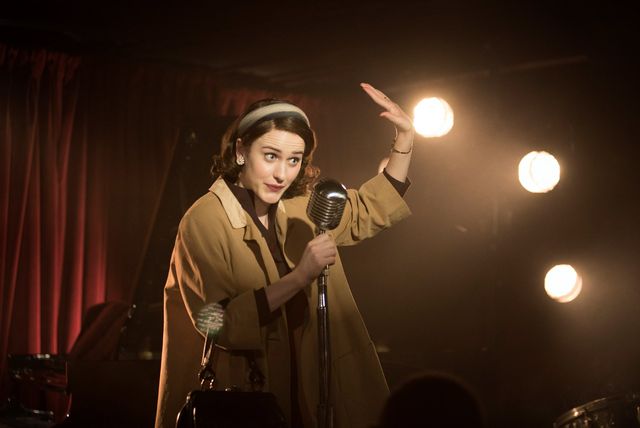 As a long-time super-fan of her beloved show Gilmore Girls, I believe she deeply deserved those awards. In my humble and unbiased opinion, Gilmore Girls is one of the smartest, wittiest, and fastest-dialogued shows in the history of television. Sherman-Palladino has been producing amazing content for years, and deserves to finally be acknowledged.

The Washington Post points out that Gilmore Girls—which earned zero Emmys in its seven-year run, and only one nomination, for Outstanding Makeup—has other alum who have gotten Emmys since the show’s wrap. Last year, Alexis Bledel, who starred as Rory Gilmore, won an Outstnading Guest Actress award for her role in The Handmaid’s Tale; she was also nominated for Outstanding Supporting Actress this year. Her former co-star and onscreen boyfriend Milo Ventimiglia was nominated for Oustanding Lead Actor both this year and last year for his performance in This Is Us.

The Marvelous Mrs. Maisel won a total of four awards. Alex Bornstein, who had hilarious recurring roles on Gilmore Girls, won for Outstanding Supporting Actress—which speaks to Sherman-Palladino’s impeccable skills in writing characters specifically for the actors she works with. Rachel Brosnahan also won an award for Outstanding Lead Actress.

At the 2017 Emmys, Lena Waithe became the first black woman to win the comedy writing award (shared with Aziz Ansari) for Master of None. Amy is the 7th person to win in the past 70 years who is not a cis man to win for best comedy writing. In 2016, Jill Soloway (who came out as nonbinary in 2017) won the comedy directing award for Transparent. This year marks the 6th time hat someone besides a man won the award for comedy directing—two of those wins belong to Jill Soloway. Amy Sherman-Palladino is the first woman to win both awards.

Sherman-Palladino won against a group of impressive nominees, including the reigning winner in the directing category Donald Glover for his show Atlanta, as well as Hiro Murai for Atlanta, Bill Hader for Barry, Mark Cendrowski for The Big Bang Theory, Jesse Peretz for GLOW, and Mike Judge for Silicon Valley. In the writing category, she was also up against Glover and Hader, as well as Stefani Robinson for Atlanta, Alec Berg for Silicon Valley, and Liz Sarnoff for Barry.

Sherman-Palladino started off her acceptance speech by saying, "Whoever put down this carpet hates women...Time's Up!" and went on to thank her cast, crew, and her husband, who has helped produce most of her work.

This was a big feat, and one that she definitely deserves. Congratulations, Amy!!

9 Moments To Pay Attention To From The 2018 Golden Globes