Why "Sharp Objects'" Portrayal Of Adult Self-Harming Is So Important 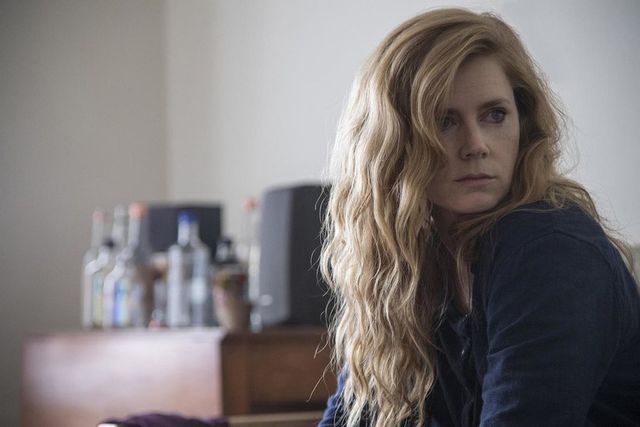 I’ve spent a lifetime attempting to find my face in other women as a means of self-assurance. As a lesbian with a U-Haul full of mental health issues, I’ve always had the nagging sense that I was different from everyone else. Finding women who identify as “others” has been the way in which I can momentarily soothe my unwavering angst and feel like I do in fact belong to this world.

As a kid, I found my face in Matilda as she lost herself in stacks of books, and I saw glimpses of myself in Harriet the Spy as she realized that observing her peers was easier than interacting with them. In high school, Kat Stratford taught me it was cool to be moody and that I didn’t have to strive to be cute. The entire cast of The L Word made being gay not only seem okay, but like it would lead to a very chic and exciting life. As someone who struggled to maintain a positive relationship with my body, I found droves of movies, books, and documentaries about women who lived with the same battle of trying to feel comfortable in their skin. I watched as these women starved themselves, made themselves throw up, and over-exercised in an attempt to make peace with their bodies. In real life, I didn’t have to look far for these types of women, either; I watched my mom, my friends’ moms, and some of my own peers fight with their bodies in a variety of ways. Some of the women in my life complained about their thighs touching or their arms being too big, some of them spoke ad nauseam about the things that they ate; and others simply wished aloud for better body parts. Finding recognition in these women was easy.

Finding my face in others is powerful; it allows let me stand a little taller and worry a little less. In my quest to find reassurance, however, I’ve never been able to find a woman who feels like me when it comes to my relationship with self-harm. Talking about our bodies and how uncomfortable they can make us is allowed to the extent of general self-loathing, exercise regimes, and diet fades. I’ve spent the majority of my life seeking comfort in my body in a variety of harmful ways. I’ve drank, done drugs, had meaningless sex, and have a history of self-harm. These have all been ways to feel some measure of control over my body, or to momentarily escape it, depending on the need. While self-harm isn’t objectively worse than any of the other vices, it’s been the one thing I’ve felt like I’m not allowed to speak about.

Culturally, we’re making progress in putting our freak flags out there, but talking about adult self-harm seems like one of the last major mental health issues we haven’t cracked open. I don’t know why this seems to be the topic we’ve decided is "too much." While I no longer engage in self-harm, it was a big part of my life as an adolescent and a woman in my early twenties. If I’m being honest, I do still feel the occasional itch and sometimes find myself fantasizing about my old ritual. The habit is gone, but the thoughts linger and have tempted me from time to time. Even though I’ve never asked a group of girls about it out at a happy hour, I’m sure I can't be the only 30-something woman that struggles with these feelings or engages in this behavior.

Unfortunately, we don’t have examples of well-rounded adults who engage in cutting or other forms of self-mutilation. We’re left with images in our head of goth teens roaming the halls of our high school. Movies and TV haven’t provided much, which seems surprising at this point, as a variety of other taboo mental health issues have been regularly explored. I guess slicing open one's skin isn’t as sexy as excessive drinking, starving yourself to supermodel standards, or having a promiscuous phase.

It doesn’t help that in the media illustrations we do have, self-harm has been grossly sensationalized. My best examples of self-harm growing up were the women of Girl, Interrupted, who were institutionalized and hardly functioning, and the movie Thirteen, which was dark and scandalous, but didn’t provide me with anything particularly hopeful or insightful. Cutting and other forms of self-mutilation are obviously stunted coping mechanisms, but so is throwing up after you eat, punching holes in walls, using alcohol and drugs as ways to feel calm, etc. We pick up most of our poor coping skills during our adolescent years, but as a society, we have chosen to let some of these behaviors grow with us into adulthood while we have decided that others must stay in the past. Most people I know started their eating disorders and drug/alcohol use in their younger years, and these actions are now not only accepted, but often glorified as trendy coping mechanisms for adults.

Talking about adult self-harm seems like one of the last major mental health issues we haven’t cracked open. I don’t know why this seems to be the topic we’ve decided is "too much."

The amount of shame adult self-harmers carry is immense. Even thinking about the act fills me with embarrassment. We haven’t let enough people speak about it enough to have a deeper understanding of it, or to see it as something other than a crazy, suicidal, impulsive cry for help (it is usually not any of these things).

When HBO’s Sharp Objects aired, I was beyond excited. I’ve been dying to see a working woman struggling with self-harm my entire life. Every Sunday night, I’ve turned on my TV searching for my face in Camille, but most evenings, I come up empty handed. While not related to self-harm, I did recognize myself in Camille when she hid in a dressing room screaming into a crumpled dress, overwhelmed by her lack of control and everyone’s misunderstanding of her. As much as some of her emotions are relatable, she’s hardly the hard-working professional cutter I was hoping to see. Her character lives at the extreme end of the mental health spectrum; the amount of drinking and cutting she is capable of is above and beyond what most people experience. I know it’s only a TV show, and part of me is glad she’s out there playing a complicated woman for people to see, but I’m left still looking for someone more accessible. Camille’s cutting is often last-minute and frenzied. For myself, and the few other women I know who have engaged in this, cutting is ritualistic, obsessively meticulous, and completely in control.

Self-harm as shown by the media seems to always be a neon arrow saying, "THIS PERSON IS EXTREMELY MENTALLY ILL OR HAD AN EXTREMELY TERRIBLE CHILDHOOD." I’m not saying that this is or isn’t true, but sometimes a shitty coping mechanism is just that. I want to see women who are struggling, but not due to extreme sexual violence or complete emotional neglect from a parent.

Where are my put-together soccer moms jabbing pins in their thighs as they hide in the pantry while their children run wild outside? Where are my overachieving working women sneaking off to pierce their skin with a razor blade they keep hidden in their Prada bag to steal away later like a cigarette? Where are my perfectionists? Where are the women of color? Where are the cheerful women? Self-harm is so much about control that I suspect many women engaging in it are actually the ones you would least except, like myself. I was the chill, nice, funny girl, and the type that never made waves. People frequently commented that I was someone who seemed to always have it all together. Appearing to have it all together is a sure sign that someone is not doing well.

Self-harm is a cycle of shame in that you know it’s only a momentary fix, you know you’re going to feel like an idiot for doing it, and you know you could end up with physical reminder to taunt you for the rest of your life. Deciding that this is an issue that only teens struggle with brings more stigma for adults who are dealing with it in any capacity. I wonder where this particular silence is coming from, especially in a time when we seem to be opening more and more doors for women to speak about their various experiences. I haven’t found my face in Camille, and I don’t see any other stories out there right now to search for it in.

Therapy: There's An App For That

Tags: Sharp Objects , Amy Adams , Camille Preacher , HBO , Gillian Flynn , cutting , self harm , mental health , personal essay
Support Feminist Media!
During these troubling political times, independent feminist media is more vital than ever. If our bold, uncensored reporting on women’s issues is important to you, please consider making a donation of $5, $25, $50, or whatever you can afford, to protect and sustain BUST.com.
Thanks so much—we can’t spell BUST without U.