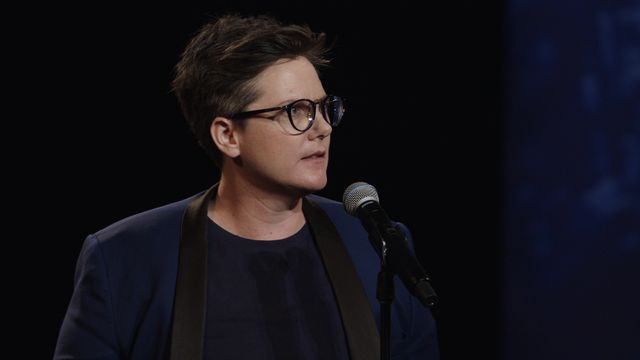 If you haven’t watched the complete Hannah Gadsby comedy special Nanette—as in, you shut it off partway through because, though her comedy was amusing, it just didn’t speak to you—you’re about to miss yet another not-so-subtle stake-in-the-ground in this watershed #MeToo, #TimesUp, #UsToo cultural moment (along with Gadsby's recommended remedy for the societal ills causing it). Young, old, comedy fans or not, women, and yes, especially men—hell, everyone should probably see this. Just don’t expect it to be any good.

Or at least, "good" in the ways we’ve grown to expect. After a decade-long career, in Gadsby’s Netflix special (based on her one-woman show that won several awards last year) this 40-year-old Aussie is pretty upfront about the fact that she should probably quit comedy. In her words: “I’m sorry to inform you, but no one here is leaving this room a better person. We’re just rollin ‘round in our own shit here, people!”

Yet, I don’t buy for a second that she believes that. Because over the course of 90 or so minutes, she goes to great lengths, and sacrifices more than just laughs, to accomplish exactly the opposite. Through the telling and retelling of stories and the deconstruction of comedy, Hannah Gadsby does her darndest to ensure we do walk away better people (whether we wanted to or not).

But fair warning, it’ll take about 45 minutes of polite, nebbish, Grade B banter before you get there. We’re eased in with details of growing up “gender not normal” in remote, Bible-belt-ish Tasmania, about getting unwanted “feedback” from fellow vocal lesbians, and about what it feels like to routinely get misgendered as a man. Gadsby is likable and intelligent, but maybe not-so-original. I wasn’t moved.

That is, until about midway through. At that point, I could see the threads of the show’s structure and how expertly she was pulling on them. Her tone had shifted; she was more sure-footed. Quiet, self-deprecating humor fell way to burning indictments, so poignantly true and infuriating that Gadsby nearly loses control. She reigns in her rage.

“I am angry, I am. I apologize... Maybe if comedians had done their jobs properly, we’d have a woman with an appropriate amount of experience in the White House, instead of a man who sexually assaults vulnerable young women because he could.” Later, she likens misogyny to a mental illness. “Because if you hate what you desire, you know what that is? Intense.”

In other words, whatever’s going on up on that stage with Gadsby, at some indistinguishable point, I’m pretty sure it stops being comedy. Is it a tantrum? Is it a story-slam? Is It activism?

After all, her self-described function as a comedian is to deliver two things: a setup that causes tension, and a release. But after pacing out laughs until they all but disappear, Gadsby leaves us positively strangled with tension. We’re not getting off this time. There’s no last laugh, only these parting words: that anger is isolating, and that our truth (stories) are our path to connection. And this is why she needs to quit comedy: because her truth isn’t funny. And she doesn’t want it to be for sale anymore.

With that, Gadsby turns comedy on its head. Her platform becomes her weapon, and it’s aimed squarely at the straight, white, predatory men who control the media and entertainment industry, her own bread and butter. Because, she says, it’s these men who are in charge of our culture’s stories, and it’s these stories that perpetuate misogyny and oppression.

Pretty somber, for a lady whose job it is is to make us laugh.

Yet, she’s right. Jokes lock experiences away in some adolescent version of itself, and how is that helping anyone learn and do better? In the latter half of her show, Gadsby shares that if you strip all the jokes away, her experiences contain childhood abuse. Mental illness. Homophobia. Assault.

Laughter may help the medicine go down, but it’s not the medicine. Stories are. They’re more powerful than jokes because it’s possible to learn from them, and from each other, as long as we’re listening.

The beauty here is that Gadsby (and lest we forget, a cacophony of other voices using their influence in a particularly defiant "the personal is political again" way such as Carmen Esposito, Beyoncé, Childish Gambino, and Kesha, to name but a few), makes certain that we’re listening. And it’s fucking inspiring. Not because Nanette is all that funny (though at times it is) but because it reminds me that as a dissatisfied citizen, I’m not only capable but obligated to use my talents for good. To not let this important conversation die on the vine like so many social movements that get burned by overexposure, loss of momentum—and yes, by jokes.

We don’t get to get off this time. We can still do a lot, every day, whether it’s writing letters, knocking on doors, running for office, or having difficult talks with those whom we disagree. Or, for performers like Gadsby who’ve made a career out of holding a microphone, it could even be hijacking a captive audience—if only for about 20 minutes or so—to stop being funny. Because this time we’re listening.

"Hot And Bothered" Is Your New Favorite Queer Comedy Webseries

10 Funny Ladies You Need To Be Watching Right Now

Sarah A. Lybrand is a writer, a producer and a mom, not in that order, and thinks they have this in common: not sleeping, heavy drinking, and flying by the seat of some probably-stained pants. You can follow her on twitter @sarahlybrand or her blog.

Tags: Hannah Gadsby , Nanette , comedy , Netflix , special , MeToo , TimesUp
Support Feminist Media!
During these troubling political times, independent feminist media is more vital than ever. If our bold, uncensored reporting on women’s issues is important to you, please consider making a donation of $5, $25, $50, or whatever you can afford, to protect and sustain BUST.com.
Thanks so much—we can’t spell BUST without U.