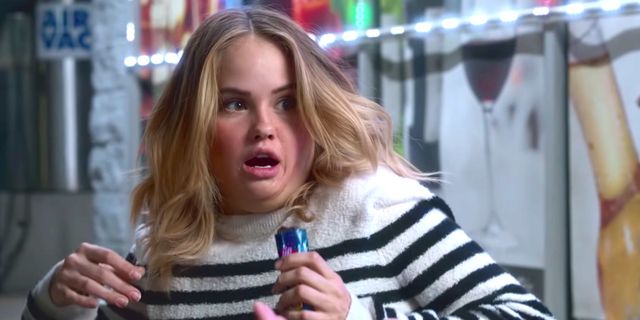 Yesterday, Netflix dropped the trailer for its upcoming TV series, a dark comedy called Insatiable. The premise? A bullied, fat teen named Patty (played by Debby Ryan in a fat suit) spends the summer with her mouth wired shut after getting punched in the face. When she returns to school, now thin and therefore “hot” (and played by Debby Ryan without the fat suit), she decides to take revenge on her bullies. Here's the trailer.

Let me repeat. The fat teen is played by Debby Ryan in a fat suit. That’s some vintage, Shallow Hal, fat Monica from Friends fatphobic bullshit.

The plotline reinforces harmful, fatphobic “before” and “after” narratives. When Patty is fat, she’s "ugly." When she’s thin, she’s "hot." When she’s fat, she’s passive. When she’s thin, she actively takes revenge on her bullies. When she's fat, that's all she is—fat. When she's thin, she realizes she can be "the former fatty who turned into a brain, or an athlete, or a princess." Fat people can be brains or athletes or princesses. And if you want to do a dark comedy about bullying, hey, guess what, a fat teen can also take revenge on her bullies! Without losing weight!

That’s because there is WAY more than one way to be a fat teenager (or a fat adult). 67% of Americans wear plus sizes right now. That’s TWO-THIRDS of the population. There are SO. MANY. different experiences that real-life fat people have—including plenty of experiences that don’t revolve around their bodies. But somehow most media still focuses on one, harmful story: an unpopular, bullied, fat teen gets thin and somehow, magically, her life is better. A fat teen played by a thin actor in a fat suit, because lol fat people, I guess. It’s Fat Monica from Friends all over again.

There are plenty of talented, amazing plus-size actors out there who have what it takes to be the lead in a dark revenge comedy, or a rom com, or a historical drama, or just about any genre you can imagine. Danielle Brooks. Aidy Bryant. Amber Riley. Gabourey Sidibe. Chrissy Metz. Seriously, where is the charming rom com starring Danielle Brooks???? It would be amazing! I would watch it 20 times!

It’s especially sad to see this bullshit from Netflix because the platform has had some pretty progressive original programming. Neflix is known for women-centric, race- and size-inclusive series like Orange is the New Black and GLOW. Dear White People takes on racism and has a majority-black cast. Grace and Frankie stars two women over 70. Seven Seconds confronts racism and police brutality (and got canceled too quickly). One Day At A Time is an amazing sitcom about a working-class Latinx family. Lady Dynamite and Bojack Horseman discuss mental health. Heck, Shannon Purser, who is plus-size, is about to star in her own Netflix movie, Sierra Burgess Is A Loser. That’s not to say that any of these shows are without their own problems (cough cough OITNB season four cough cough), but to me, it’s extra disappointing to see this fatphobic bullshit on Netflix rather than, like, NBC, home of the Biggest Loser.

I’m sick of fatphobic stories like this, but mostly, I’m just tired. It’s 2018. Fat Monica was TWENTY YEARS ago. Shouldn’t we, as a society, be better by now?

I want more and better stories about fat teens. (And fat adults, too.) I want better-told stories about bullying, but I also want stories about fat teens that have nothing to do with their bodies. Rom coms. Coming-of-age dramas. Heck, even crime procedurals. Until we get them, I guess I’ll just watch My Mad Fat Diary once again. (It’s great, please watch it if you haven’t, it's on Hulu.)

On Being Fat In Ways White Girls Don't Understand

Your Fat Friend Is Going It Alone

How I'm Reclaiming The Word "Fat"

Tags: Netflix , Insatiable , fatphobia , sizeism , tv shows
Support Feminist Media!
During these troubling political times, independent feminist media is more vital than ever. If our bold, uncensored reporting on women’s issues is important to you, please consider making a donation of $5, $25, $50, or whatever you can afford, to protect and sustain BUST.com.
Thanks so much—we can’t spell BUST without U.