A New "Hocus Pocus" Is Almost Here And Probably Queer 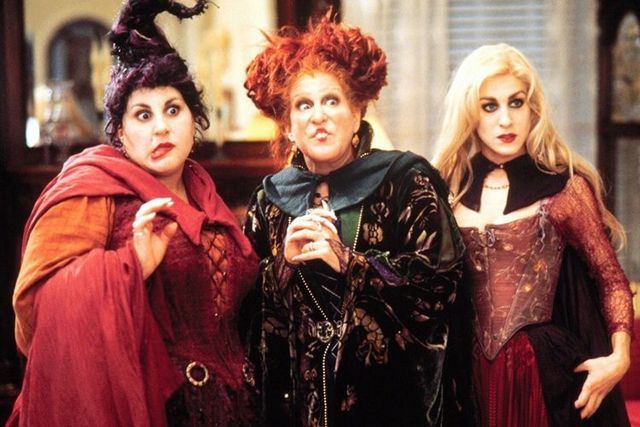 So, Disney is in the early works of a sequel to the 1993 cult classic Hocus Pocus. The original film starred Better Midler, Sarah Jessica Parker, and Kathy Najimy as three evil witches known as the Sanderson Sisters. According to Deadline, there is now going to be a 2018 version, and it looks like it is almost definitely going to be queer.

Last week, Disney released a novelized version of Hocus Pocus, reports Autostraddle. The first part of the book is a retelling of the original movie, but the second part is a whole new, and gay, story. Which is rumored to be the basis for the new Hocus Pocus TV movie.

The story takes place 25 years after the original left off. Allison and Max, part of the original group of teens who fought against the witches, are married and living in Salem with a daughter named Poppy. Poppy does not believe in witches, just like her father in the beginning of the original movie, and she is even embarrassed to have such superstitious parents.

But then, the most brilliant and beautiful girl at school, Isabella, suddenly develops an interest in the legend of the Sanderson sisters, Poppy develops an interest in Isabella, and the crush seems to be mutual. It gets even better: both Isabella and Travis—the third member of their Halloween Hijinks Squad—are people of color, and together, the trio takes on the Sanderson sisters. The new story pulls a lot of callbacks to the original but will also work as a standalone story. It takes place on Halloween night of 2018.

The new story also brings in up-to-date knowledge of witches. It confronts the wrongfulness of the Salem witch trials, addressing them as a mass persecution of innocent women. But they say there just happened to be three evil witches that murdered little kids who had to be dealt with, too. When the children are learning about the legend of the Sanderson Sisters in class, they ask things like, “Doesn’t this relate to the evolution of criminal justice and the autocratic state?” and “What do the Sanderson sisters say about misogyny and unmarried women in colonial America?”

I really hope the rumors are true, because I can’t wait to watch a woke, queer, and racially diverse sequel to Hocus Pocus!

I Put A Spell On You: A Young Feminist's Journey Into Love And Witchcraft

Before Ghostbusters, There Were These 20 Knee-Slapping Comedies With Female Leads