"Seven Seconds" Tackled Racism And Police Brutality And Earned Regina King An Emmy Nom—So Why Was It Canceled So Quickly? 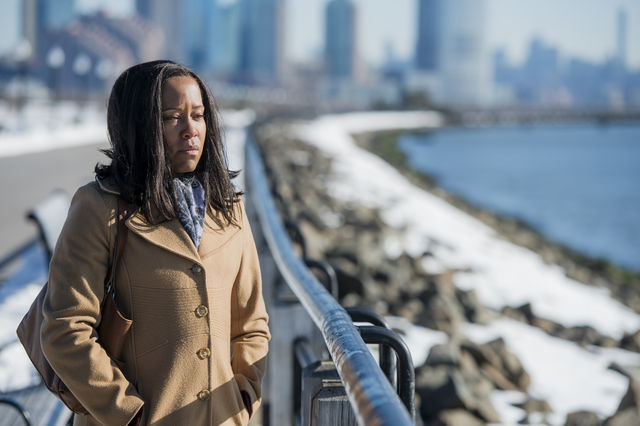 I just finished watching the well-cast and complex first season of Seven Seconds, a Netflix Original that premiered at the end of February. My delight in this show, however, was short-lived, when I learned that the show had already been canceled, and my surprise has expanded now that star Regina King has earned an Emmy nomination. Despite the cancellation, it is still worth your time to check out this series because it is complete as it stands; there are no threads left dangling, because the intention had been to have a series based around Jersey City with some recurring characters but with new stories each season. This season was based on a Russian film called The Major (Yuri Bykov, 2013), so it has a clear and fully realized plot. It tells you how strongly Seven Seconds hit me that I want you to know about it even if there isn’t going to be more, because it is very much commenting on our contemporary concerns as they relate to intersectional identity, as well as power and violence.

While the plot takes on a typical procedural approach stretched out over ten episodes, it does something far beyond solving who is responsible for the hit-and-run of a black teenager named Brenton Butler (Daykwon Gaines). From the start, we know that the new-to-town cop (Beau Knapp) is the one who accidentally hits Brenton, so the crime is not a mystery. What instead creates the tension is seeing all of the roadblocks to justice, from our presumptions about each other to our inability to talk to each other in order to correct these presumptions. This is a timely drama about how race and class divide us and how one inequity leads quickly to others. In the era of Black Lives Matter, and with an awareness that a diversity of stories and storytellers better all of our understandings of the world around us, we should be watching this show and making sure others like it don't get canceled.

Although I began watching without knowing the show’s history—I just clicked on it between other shows—it didn’t surprise me at all to discover that the showrunner was a woman of color. Veena Sud takes on the typically male narrative of crooked cops and drug-prone neighborhoods, but she takes us beyond the violence and drama of films like Goodfellas—the diner oft-visited by the police in the story is even named Goodfellas. In this narrative, though, there is no romanticization of violence. While some have criticized this story for “wallowing” in its darkness, I don’t know how we could expect this type of story to be any lighter. To me, there are clever twists on the way to an inevitable conclusion; there are difficult ramifications to every action, but they are logical in the world that is presented—in our world. We should really all cease to be surprised. Yes, the series is hard to watch in places, but especially as Black Lives Matter expands the discussions about police brutality, the realism of this show is a major component of its power.

Seven Seconds also knows the power of its cast. Regina King as Latrice Butler takes on the role of the grieving mother who is often ahead of the professionals working on her case, and Russell Hornsby as Isaiah Butler is the embittered father who tried to keep his son (and brother) away from gangs, but just like at his job at a meatpacking plant, he is helpless to stop the slaughter. The cast’s depth, though, extends to all areas. Clare-Hope Ashitey as Assistant District Attorney K.J. Harper has fallen out of her wealthy family’s good graces even as she tries to do the right thing, and Michael Mosley as Detective “Fish” Rinaldi always offers the witty comebacks and has a good heart, but is living in the rubble of his own destroyed family life. The police officer characters are not quite as clearly drawn, which is understandable because show prioritizes focusing on the types of characters that on't normally get the spotlight, but the creators still do a fine job of demonstrating the failings possible within the police department even as they all read as real individuals.

Even small roles like the character of Nadine (Nadia Alexander), a young white teenager who witnessed the crime, contribute in stunning ways to the show’s interrogation of police corruption. One of my favorite moments occurs when Nadine, without any words, reveals to Detective Fish who she saw at the crime scene with terror-stricken glance of her eyes. Fish just as silently takes it all in. This show is thoughtful and controlled; it gives its actors the space to really show off their skills, whether they’re in a lead or a smaller role.

Seven Seconds has the broad appeal of the procedural, the sense of loss of a play like August Wilson’s Fences, and a cast and writing that won’t quit. Unfortunately, Netflix has quit on this show. Nevertheless, watch it. It is complete on its own, and in this age of streaming television, you never know when a property may be rejuvenated. After all, Sud’s previous series The Killing was saved two times. This show bends a recognizable genre, and that difference is what makes it valuable. Whether it is saved or not, watch it because it is timely, exceptionally well made, and a story worth telling.

The Complicated Feminist Legacy Of "Sex and the City"

Viola Davis Takes On The Justice System With "The Last Defense"