Britney Young first kicked ass and stole hearts when we met her last summer as Carmen “Machu Picchu” Wade in Netflix’s GLOW—and now, she’s back for the show’s second season, which she describes as even “bigger and better.”

“So many of the girls get deeper storylines,” Young told BUST. “Everyone just shines brighter. The producers definitely play to all of our strengths, and I think that’s something that’s very rare.”

If you aren’t familiar with GLOW, you definitely should be. The show, based on the ’80s syndicated women’s wrestling circuit of the same name, features an ensemble cast of women, one of them being Carmen, the daughter of a professional wrestler who struggles to show her family that her dreams should be taken seriously.

“The one thing that really drew me to Carmen and wanting to play her was that she was just a really nice person. And she’s a nice, sweet person with an agenda, which I think is something that’s pretty rare in film and TV these days,” said Young. “She’s a little bit shy, she’s not really secure in her femininity. She has problems with her family and trying to chase her dreams. Interestingly enough, for as much support as she gives the rest of the girls, she also realizes herself that she needs to do it on her own—and in spite of all her insecurities, she goes out there and kicks ass.”

Both Young and her character became instant fan favorites when GLOW dropped last June—not only because Carmen is the supportive sweetheart of the group but because, as Young told BUST, her problems feel true to life, especially her struggles with anxiety and stage fright. In one scene, the character runs outside to ride out a panic attack. “I’ve had anxiety attacks before, and it’s not screaming and yelling. It’s not being able to catch your breath, being disoriented,” she said. “That’s what I wanted to show. I had a conversation about it with the director who shot that episode, and he just said, ‘go for it.’” 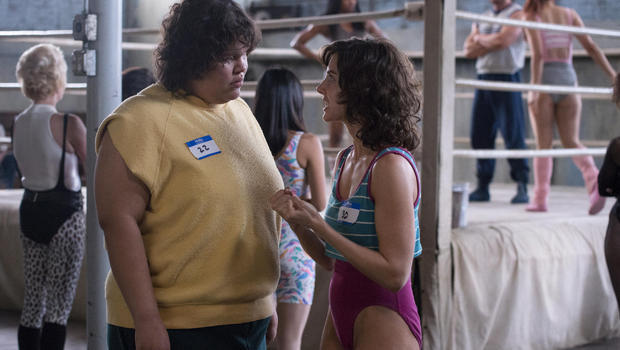 The show’s first season received praise from critics as well as the female wrestlers the show is based on. “When GLOW first came out, a lot of people were just like, ‘oh, here’s this feminist show, pushing their feminist agenda,’” said Young. “Then actually, when they watched it, they realized, ‘Oh, you guys aren’t pushing any agenda. You’re literally showing these situations as they happen.”

Just like the original GLOW syndicate, the Netflix show is brought to life by a mostly-female cast. As was evident by GLOW’s ratings, the way we talk about female-fronted entertainment has improved a bit since 1985, when the show takes place. “Women’s matches were treated as the sideshow. It was the time when people would go get snacks,” Young said. “I think about that, and now I watch these WWE Divas and even just ourselves, and I think, how can people miss out on this? This is hardcore wrestling going on.”

At the end of the last season, soap opera star-turned-wrestler Debbie (Betty Gilpin) watches with her husband, Mark, as the women perform. She’s just quit the show, and Mark retorts to her that the idea of women’s wrestling is “silly,” anyway. There’s a moment right before Debbie chooses to go back into the ring, Young said: “You see Debbie sit there and think, 'am I going to stay in this relationship where this person doesn’t support me and thinks what I believe in is silly? Or am I actually going to put myself out there and go into a relationship with these women who support me and want me to do well?'”

This attitude wasn’t left behind three decades ago, though. “I think back to when Bridesmaids was nominated for a screenplay Oscar a few years back, and a lot of people were like, ‘Can Bridesmaids do it? Can a female-led comedy bring in an Oscar nom?’ And I just remember thinking, 'Why not? This movie is hilarious. These women are amazing,'” said Young. “You know, this is one of the biggest box office comedies of all time, and it’s led by six women. So why are we even having this conversation?” 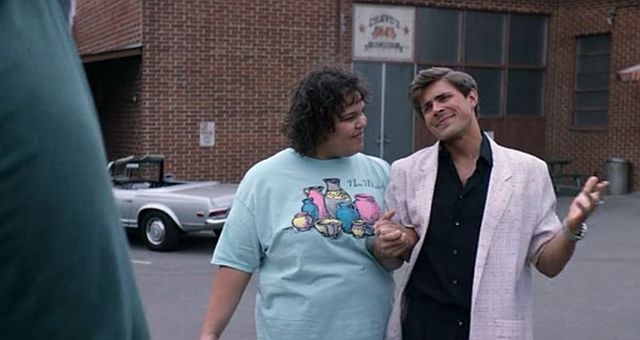 GLOW’s second season jumps even deeper into the diverse cast of characters and relationships—including, Young said, the sweet, budding friendship between her character and goofy, showy financier Sebastian “Bash” Howard, played by Chris Lowell, one of Young’s close friends.

“Years ago, one of his first shows was called Life As We Know It, and his character dated Kelly Osbourne. I told him when I met him, ‘you know, as a plus-size girl, that relationship made me feel amazing—to see the hot guy finally date a plus-size girl, and have it not be a joke or a fetish or something, was so heartwarming to me,’” she said. “I love anything Carmen and Bash, and I love that everyone’s shipping them, but I want them to go where they naturally should go.”

What else should we get psyched about this season? “We see a lot more competition among the girls,” Young said. “We’re really trying to delve deep into a lot more characters this time around. We have some really great storylines, some great character arcs, and we have a lot more wrestling.”

Catch the first two seasons of GLOW on Netflix.

9 Of Your Favorite TV Shows That Got Abortion Right