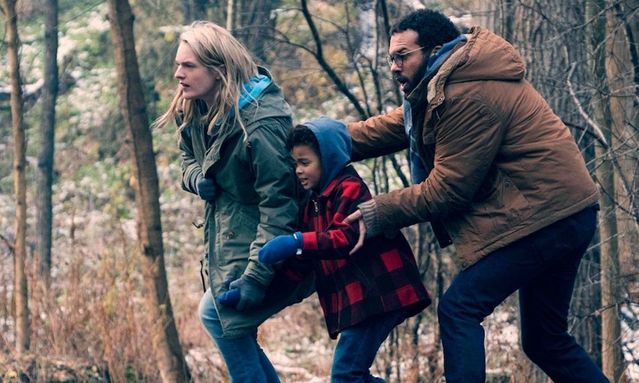 Note: For those of you who are still catching up on the Handmaid's Tale Season 2, this story contains spoilers for episode 10, “The Last Ceremony" (aired June 20).

In its most gut-wrenching episode to date, The Handmaid’s Tale presents a harrowing plotline that feels less like a fictional dystopia and more like this week’s news. While we’ve come to expect deeply traumatic content from this series, the horror of this particular episode was amplified by its resonance with stories of immigrant family separation currently dominating headlines. As we watch June and her daughter Hannah reunite for the first time in years, it’s impossible to ignore just how much their story resembles those of the thousands of families separated under President Trump’s “zero tolerance” immigration policy. While this episode was filmed some months ago, its eerie likeness to our current political crisis comes with a chilling realization: this dystopian narrative isn’t a cautionary tale. It’s our reality.

In the first half of “The Last Ceremony,” June’s symptoms of early labor result in a false alarm, much to the disdain of Serena Joy. And when June asks Fred, her Commander, to be reassigned to the district where Hannah lives, that is the final straw. Fred and Serena have grown tired of June’s defiance. They want to break her. Together, they devise a plan to rape her, or as they say, to “help the baby come out naturally.” The scene that follows is nothing short of violent, and as it ends on June’s face, wide-eyed and stunned, we realize that they’ve succeeded in breaking her spirit like we’ve never seen before.

But it’s the second half of the episode that rings with a horror close to home—one that is symbolic of our own reality. As a twisted reward for enduring his assault, Fred asks Nick to bring June to a remote location where she is finally reunited with Hannah—but only for ten supervised minutes. The scene is wrought with heartbreak as Hannah denies June by saying she has new parents now, and even reprimands her for not trying hard enough to find her. It was almost unbearable to watch June explain how hard she had tried, while censoring her story to shield Hannah from the true terror of Gilead. We’ve seen all of her attempts to escape, witnessed all of her torture—we know how much she’s longed for this moment. But just as Hannah begins to open up to June again, their time is up. We watch them embrace for what may be the final time: June hiding her tears from Hannah, and Hannah desperately holding on. As the guards pull them apart, Hannah’s small voice lets out a mournful “Mommy,” and our hearts shatter beyond repair. 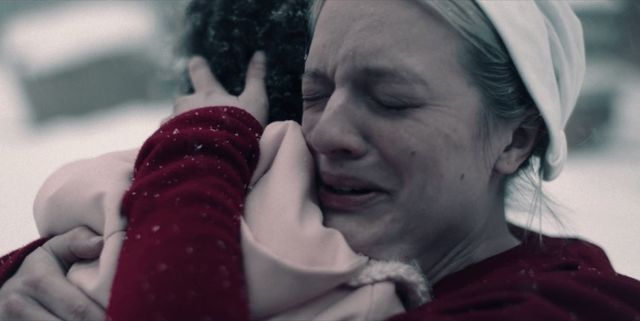 It’s impossible to watch this scene without it bringing to mind the 2,500+ immigrant children who have recently been separated from their families, and the irreversible trauma they’re most definitely experiencing. In the first moments of June and Hannah’s reunion, we see just how much estrangement and emotional damage this kind of separation can cause. And as we hear Hannah cry out for June, we feel an echo of the cries we heard in a recent audio of detained immigrant children, calling out for their loved ones too. To think that our current culture so closely resembles a dystopian climate is terrifying, to say the least.

Under President Trump’s “zero tolerance” immigration policy, not only are immigrant families separated after crossing the U.S.-Mexico border, but children are then held in jail-like detention centers while their parents face prosecution. Though President Trump signed a (misspelled) executive order last week to end this kind of separation, he did not detail how or when the thousands of children already in custody would be reunited with their families. A joint statement released by DHS and HHS on Saturday was meant to clarify this plan, but only offered further uncertainty. According to its terms, some children may remain in custody as long as their parents’ deportation proceedings are going on—which could take years, in some cases. Others are offered a more immediate reunion, if their parents agree to voluntary deportation. But for families seeking safety here in the states, those terms would put both parents and children in grave danger, making the potential for a reunion that much more implausible.

In recent weeks, millions of dollars have been donated in support of these children in custody and many lawmakers are currently fighting to reunite them with their families, despite our administration’s harmful policies. But the situation remains dire as they continue to endure further trauma with each passing day. And until the administration’s policies are corrected, there may be more tragedy to come.

Though dystopian narratives have long functioned to expose evils in our culture by depicting extreme examples of what could happen when they’re not controlled, the parallels between the latest episode of The Handmaid’s Tale and our current political catastrophe show us we’re already living in that extreme. Things have already gone too far.

Nicholl Paratore is currently pursuing an MFA in creative nonfiction at the University of North Carolina Wilmington. She spent nearly a decade living in New York, where she studied media theory at New York University and worked in the fashion industry. Her writing explores image and identity and is largely influenced by her interest in visual media. She is now at work on a memoir. Follow her on Instagram: @nichollp.