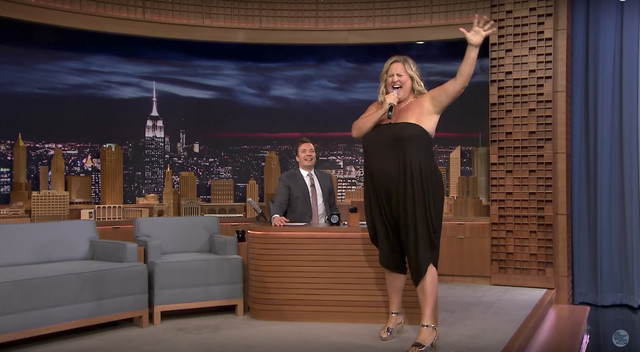 We already loved actress and comedian Bridget Everett, but now we love her even more after she kept it real and fun on NBC's The Tonight Show earlier this week.

She appeared on Jimmy Fallon’s late-night talk show for the first time on August 1, and talked about her career – first starting in karaoke and then moving up to the cabaret/alt-comedy scene of New York City. She also elaborated on her life motto – “DDHD” (“Dreams Don’t Have Deadlines”), which stems back to a 2013 interview between LL Cool J and Oprah – and how it influenced her life.

But the highlight of her segment was belting out Janis Joplin’s “Piece of My Heart” with her well-known cabaret pipes – and She. Owned. It. It was so good that she received a standing ovation from Jimmy Fallon and the studio audience at the end. See the full interview segment below, including her killer karaoke performance (which is after the 5:35 mark).

See Everett star in her upcoming movies this summer: Fun Mom Dinner (out August 4) and Patti Cake$ (out August 18). You can also check out our spotlights and those accompanying movie trailers in The Hotness.

12 Brand-New, Woman-Centered Movies, TV, Books, And Music To Get Into This Weekend

Bridget Everett Is Sure As Fuck Unforgettable: BUST Interview

Erin DeGregorio is a student pursuing an M.A. Degree in Journalism at CUNY Graduate School of Journalism (New York, New York). She has a focus in arts and culture reporting and will be graduating in December 2017. Her portfolio of select clips can be viewed here.

Tags: Bridget Everett , Piece of My Heart. Janis Joplin , Jimmy Fallon , The Tonight Show Starring Jimmy Fallon , karaoke , singing , comedy
Support Feminist Media!
During these troubling political times, independent feminist media is more vital than ever. If our bold, uncensored reporting on women’s issues is important to you, please consider making a donation of $5, $25, $50, or whatever you can afford, to protect and sustain BUST.com.
Thanks so much—we can’t spell BUST without U.