Maria Bamford Is A Comedy Rebel: From The BUST Archives 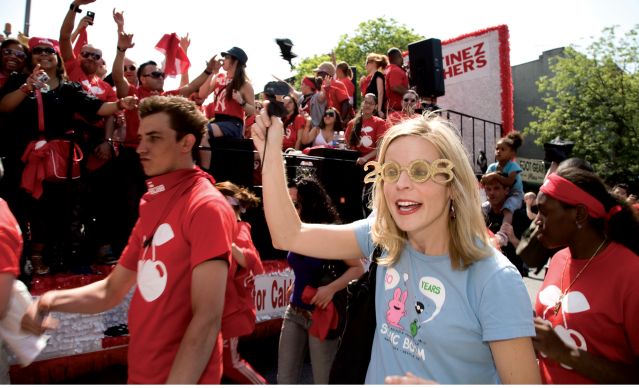 Like many female standup comics, Maria Bamford has a joke about wanting to get married. But her take on it is, well, different. “I do wanna get married. It just sounds great,” she begins in her naturally high, girlish voice. “You get to go grocery shopping together, and rent videos, and the kissing and the hugging underneath the cozy covers. Mmmm!” And here her voice gets a little deeper and slower: “But sometimes I worry that I don’t wanna get married as much as I’d like to be dipped in a vat of warm, rising bread dough.” As with that joke, all of this 37-year-old’s comedy centers on anecdotes that reveal an avant-garde point of view and a surprisingly sharp bit of commentary underneath, whether she’s delivering a fake lipstick ad (“By the time I notice the wide discrepancy between my salary and that of my male peers, I’d have to reapply!”) or sharing her experiences with mental illness (“I’ve never really thought of myself as depressed so much as paralyzed by hope”).

Bamford’s audience has been steadily growing for years, and it surged in 2008. Her second Comedy Central special premiered in February, and soon after, she wrapped up her two-season Internet sitcom on SuperDeluxe.com, a one-woman show based on the premise that Bamford has a mental breakdown and moves in with her parents in Duluth, MN. “The show idea is that it’s my worst fear and my greatest wish,” she says, “that I could just sit in my parents’ home and fall apart.” This fall, you can hear her voice the character Miracle Grohe in Sit Down, Shut Up, the new animated sitcom from Arrested Development’s Mitch Hurwitz.

“I think people pay more attention when my voice is not my high, squeaky, baby voice. And it’s fun. I started impersonating my mother, and that went well. Then I started thinking, what else can I do?”

Bamford started doing standup in college and quickly discovered that voices were her thing. “I think people pay more attention when my voice is not my high, squeaky, baby voice. And it’s fun. I started impersonating my mother, and that went well. Then I started thinking, what else can I do?” The list these days includes her father, her agent (“Maria, when I first met you, I was concerned I was going to be annoyed by you. Because you have a high, grating, childlike voice. And you need to know that about yourself”), and an African woman (in a hilarious bit in which Extreme Makeover goes to sub-Saharan Africa). “I’m working on my political cadence,” she says, slipping into the tone, “where you project! And talk with a smile about the future!”

For fans, it’s often puzzling why Bamford hasn’t yet made it huge. But maybe she’s too much of an iconoclast for Hollywood sensibilities. “I did a couple of bit parts on sitcoms,” she says, “and I had to put on a giant padded bra. That’s why I haven’t liked some things about TV. I don’t like anything that’s fear based.” And anyway, she’s not sweating it. “All my dreams have come true,” she says. “I’m living in a gravy boat full of gravy.”

Women Who Slay: 12 More Stand Ups You Should Be Obsessed With