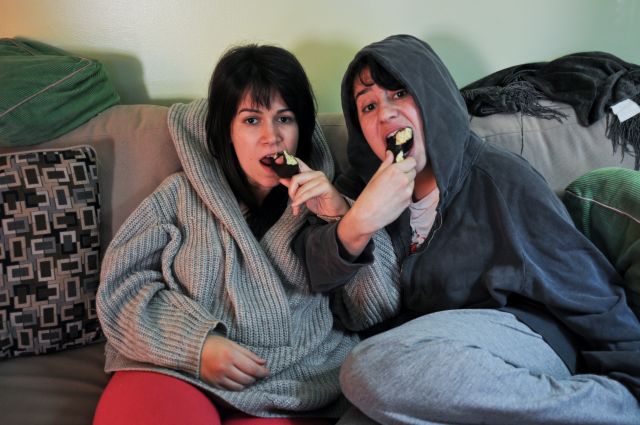 Because whether you are single or part a couple, this day can be rough. Watching these shows will help you make it through:

If for some reason you haven’t seen High Maintenance yet (a fact you should probably keep to yourself), HELEN is admittedly one of the bleaker episodes of this brilliant, Vimeohosted series about weed and loneliness in New York City. That said, Michael Cyril Crighton’s portrayal of a desperate man with a major, unrequited crush is so achingly earnest and committed that it will touch even the most jaded of hearts on this Hallmark holiday, or at least just make you feel much less creepy about that thing you have for your hot neighbor in 2L. Plus, Helen Hunt fan art.

2. For the couple who is so over Valentine’s Day... The Actress “ Meet Brian”

Gynecologist visits. Burt’s Bees gift baskets. Dishes. This is the stuff of reallife adult relationships. In this episode of Ann Carr’s “The Actress”, a smart and honest series chronicling the predicaments of simultaneously pursuing acting and being an adult woman, we are introduced to protagonist Hannah’s boyfriend, “marijuana enthusiast” Brian. Witty dialogue, mentions of “evaporating semen”, and the heartfelt realness Carr delivers in her performance will be relatable to any couple in it for the longhaul.

3. For when you decide to be your own Valentine… PSYCHODRAMA “ Guilt”

The latest episode of PSYCHODRAMA, a series about three young female friends who all see the same therapist, titled “Guilt”, is about pleasurable indulgence in the face of neuroses, which is the kind of thing that should happen when you find yourself single on Valentine’s Day. From such “basic” guilty pleasures as retail therapy to accidentally enjoying a catcall and even pleasing one’s ladyparts to daydreams of a certain guru zenmaster, played by beautiful Ismael Cruz Cordova (Sesame Street, The Good Wife). Psychodrama is hilarious while remaining grounded and relatable. Plus, the production value on this series is as good as the small screen. (Fun fact: creators Liza, Kimmy, and Luisa all saw the same therapist in real life, oops.)

4. For when you say f*ck it and go on a Tinder date on VDay… Local Attraction “ Trent & Maeve”

Connor Hines’ wonderfully written and expertly acted pilot episode of Local Attraction is guaranteed to resonate with anyone who has ever tried online dating (and one episode is all you need to understand why ABC jumped on the opportunity to develop a network show with the creator). In “Trent & Maeve”, Hines plays a Goldman bro struggling to understand why his Brooklynbased blogger date can’t appreciate the fact that he impulse ordered “‘tinis” for both of them. We’ve all been on this date, and even though it’s a lot like watching a car crash, the hilarious lack of selfawareness Trent exudes in comparison to Maeve’s genuine effort to mind her manners is a great reminder that Valentine’s Day might be for suckers, but we’re all in this “finding someone” business together, for better or for worse.

5. For when your valentine is your BFF… Broad City (*The Web Series) I Heart New York

In the final installment of Abbi Jacobsen and Ilana Glazer’s “Broad City” (in its original form as a web series) we get to witness these loveable stoner gal pals boob bump with Amy Poehler, navigate the treacherous yet beloved streets of New York, and rip an iced coffee straight out of the hands of SNL’s Sasheer Zamata. It all seem a lot more romantic than any Valentine’s date we could imagine Ryan Gosling planning. Jacobsen and Glazer’s Comedy Central show, now in its second season, is all about absurdist awesomeness and watching this episode of their web series makes it easy to see how they got Poehler’s attention (and a third season on Comedy Central). Both a love letter to New York and female bestfriendship in general, this is the feelgood episode to watch curled up with your bestie and doobie this Vday.