Martha Plimpton is our Hero 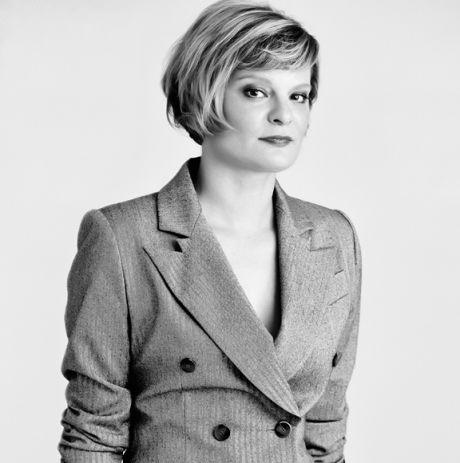 From ’80s teen classic The Goonies to contemporary hit sitcom Raising Hope, Martha Plimpton has been playing roles women love for 35 years. Here, she opens up about acting, activism, and on-screen abortions.

Sitting down with the amazing Martha Plimpton is, well, pretty amazing. Minutes after we arrive at the small Italian place in N.Y.C. she’s chosen for our interview, she proclaims gleefully that the vintage refrigerator in the corner is exactly the same kind she had as a kid. Later, she exclaims over the gorgeous crust on our eggplant-parmesan pizza and correctly guesses that our adorable waiter is an amateur welterweight boxer, which sends her into a reverie about Joyce Carol Oates’ book On Boxing. Martha Plimpton is that rarest of breeds: a fascinating person who is also fascinated by everyone and everything around her.

It’s this curiosity and breadth of knowledge that has carried her through a truly astonishing 35-year acting career. A professional performer/model since age eight, Plimpton matured into iconic teenage film roles (The Goonies, Parenthood), nabbed three consecutive Tony nominations for her work on Broadway, and is now best known for her turn as Virginia Chance—the mother of a young man who unexpectedly becomes a single dad—on Fox’s oddball hit sitcom Raising Hope. She’s also a cofounder of A Is for…Advocating Women’s Rights, the feminist organization behind all those scarlet A’s made of ribbon you’ve been seeing on the lapels of so many progressives lately. But I’ll leave it to Plimpton to explain about that—and much more.

You’ve had such a varied career, seamlessly moving between movies, theater, and TV. Was that the plan?

I’m a character actress, essentially. So I work wherever the work is. That’s how I want to be. I don’t want to sit at home waiting. I was working pretty regularly in theater, making a living, but I was in debt, and I wasn’t really able to get out. I wanted a TV gig if one was being offered. And then I read the Raising Hope script, and it was just so damn funny. It really made me laugh. And I thought, I could do this—I could really do this. And I was lucky enough to actually get the job, thank God!

It’s interesting to hear you speak in financial terms about this role, since on Raising Hope, the Chance family is really struggling to make ends meet. That’s something you don’t see on sitcoms very much anymore.

I think it ends up becoming more political than it’s intended to be, because there’s an industry-wide fear of depictions of the working class. And I wish there weren’t, because people in this country, at this time, really relate. Not everyone wants to turn on the TV and be filled with self-loathing about all the things they don’t have.

Speaking of politics, you cofounded the feminist organization A Is for…Advocating Women’s Rights, which raises money for reproductive freedom by selling “scarlet letters”. What motivated you to do that?

Well, I was in L.A. when the whole thing with Sandra Fluke [being called a slut by Rush Limbaugh for advocating for birth control] unleashed something that had been lying dormant in the conservative environment for a long time: this underlying hatred for women that was really stark and shocking. We’d seen this sort of steady legislative breakdown of our fundamental civil rights for a long time, but it wasn’t until this national attack-dog thing happened that [things came to a head]. So my friends and I were talking about the scarlet letter in this general conversation, like, “Why don’t they just slap a scarlet letter on us and be done with it?” And then we thought, Actually, that’s not a bad idea. Why don’t we wear a scarlet letter, and instead of wearing it in shame and isolation, wear it in defiance and recognition? We know that 98 percent of American women use birth control, and one in three will have an abortion in her lifetime. That’s a lot of women. And yet we are subjected to so much silencing and shaming. We don’t connect with each other, we don’t talk about it, we keep it under wraps. And as a result, we perpetuate the cycle.

You’ve played lots of teen moms—Virginia Chance, Julie Buckman in Parenthood. How have your roles informed your advocacy work?

I was also in a movie called Eye of God where I had an abortion on camera. A fake one, that is. [laughs] I mean, I’ll do a lot of things, but....But no, in terms of Virginia, in terms of Julie, the thing is, they always had agency. Nobody forced them to have children against their will. All we’re talking about when we talk about reproductive rights is agency and choice and the ability of women and girls to be empowered to make decisions on their own. That’s freedom.

This article ran in the Aug/Sept issue of BUST Magazine. On newsstands now, or subscribe here.

Tags: Feminizzle , A Is For , Marhta Plimpton , Goonies , Raising Hope