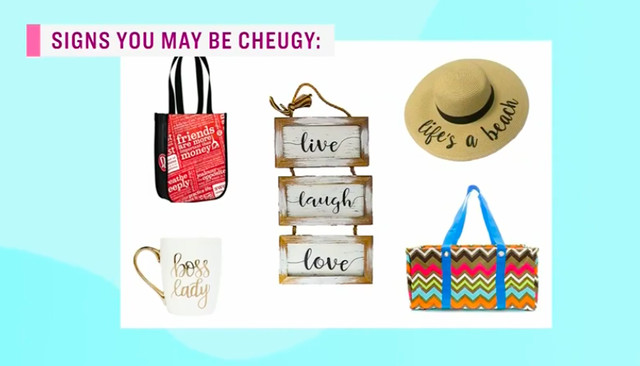 This new classification is taking the internet by storm. According to Urban Dictionary, cheugy is “the opposite of trendy. Stylish in middle school and high school but no longer in style.” You are cheugy for not knowing what cheugy means. It’s not an accusation; it’s a fact. An uncontestable, hard-to-swallow fact. Also, writing an article about cheuginess is cheugy.

At its root, cheugy seems to be about chiding Gen Z for things that they liked when they were younger—which was only about 5 to 10 years ago. It's about things that were cool in the 2000s and 2010s—so, yeah, things that were cool when Millenials were coming of age. And, frequently, it's referring to things that millenial women liked. Which might make you think that Cheugy is a term —like "Basic" —that's just another way to hate women.

But cheugy is different from a label like "Basic" because it is not a bullying term. That's because things that are cheugy are not all bad. This new internet word dares to embrace things like Taylor Swift’s old albums, Twilight, and pumpkin spice lattes. These trends have passed. It is what it is. But one should not be shamed for holding a special place in their heart for the things that made them feel better in middle and high school. Back then seemingly trivial things to adults were the biggest problems in the world -- like your friend group separating because you didn’t all have the same favorite member of One Direction. Your comfy Ugg slippers got you through that.

It validates stan culture. Selenators, Swifties, Little Monsters, the Beehive, and Beliebers fit under the cheug umbrella. And yet Selena Gomez slaps, Taylor Swift was named the freaking Artist of the Decade, Lady Gaga is the ultimate ally, Beyonce owns the world, and Justin Bieber never puts out anything but bops. These are the facts. Mocking people who are in tune with reality only exposes oneself as delusional and unable to keep up, therefore cheugy.

Additionally, cheugy is subjective. We are all inherently cheugs. I, an inactive member of the Gen-Z army, own skinny jeans. I am acquainted with cheugs who can quote every Friends episode with citations when I think it would be cooler if they could do that with Seinfeld. My mother, an 80’s queen, will never stop wearing electric blue eyeliner. Over my dead body will I hand over my Tory Burch sandals to the gods of influencer-defined trendy fashion.

Cheugy isn't gendered either. "Guy things" can be cheugy, too. An obsession with Barstool Sports president Dave Portnoy, bro tanks or Greek life-wear, Nike Elite socks in every color combo, and fake wayfarer sunglasses from some kid's bar mitzvah that are only brought out for the bandwagon "boats and hoes" Instagram picture at the lake are all cheugy.

In reality, trendiness is just a cycle. What was cool yesterday might not be cool today, but it could be cool tomorrow. The cheug lifestyle is like “1985” by Bowling for Soup. Debbie has hit a wall. She loves Bruce Springsteen, Madonna, U2 and Blondie, but her kids think that she’s uncool. Except in this timeline, Debbie says “Fuck it,” and listens to her music anyways. Now Miley Cyrus is doing Blondie covers and, all of a sudden, Debbie is cool again.

Fashion and trends don’t age. They recycle themselves. Nothing is quite original. Yet non-cheugs live in a fantasy world of internet classism where the newest meme was old yesterday. Life really doesn’t move that fast, and cheugs are here to tell you that. Someone you know will probably think the term cheugy is cheugy by the time you see this, but living your best life sans shits to give to the elitists behind the screen never goes out of style.

Women, Wheels, and the Sexist Stereotype of the "Backseat Driver"

Tags: cheugy , Taylor Swift , Twilight , One Direction , internet slang , basic , millennial , Gen-Z
Support Feminist Media!
During these troubling political times, independent feminist media is more vital than ever. If our bold, uncensored reporting on women’s issues is important to you, please consider making a donation of $5, $25, $50, or whatever you can afford, to protect and sustain BUST.com.
Thanks so much—we can’t spell BUST without U.