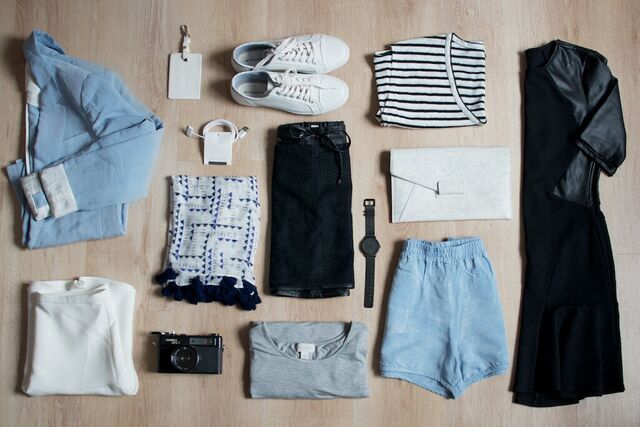 As we reintroduce ourselves to the forgotten concepts of having plans, going places, and doing things in the coming months, we may be coaxed to reluctantly emerge from our loungewear cocoons. While it may be nice to have excuses to leave the house and truly get dressed once again, some of us may not be so enticed by the idea of sacrificing comfort and ease in order to do so. Instead of rushing out to buy a new wardrobe, consider doing the opposite by creating a capsule wardrobe.

A capsule wardrobe is the result of streamlining your existing wardrobe to the bare necessities, or at least to a reasonable number of pieces that can be mixed and matched and dressed up or down for various occasions, locations, and times of day. It’s an easy, cost-efficient, and eco-conscious way to simplify the lost art of getting dressed each morning.

Capsule wardrobes entered collective consciousness in the 1940s. According to the Merriam-Webster dictionary, the word “capsule” was first used in 1693 in reference to “a membrane or sac enclosing a body part (such as a knee joint or kidney).” It wasn’t until 1938, with the rise of time capsules, that the word was used to describe a small, curated collection of items. The July 15, 1938 issue of Vogue featured a fashion story titled “Summer Slip Covers,” which highlighted the joys of mixing and matching in a fashion context. “The presto-chango of dress plus jacket, admittedly a familiar story, is retold here in a new way,” the piece read. “Beginning with a really good black crepe slip, we proceed to add different kinds of tops—slip covers that may be camisole, house-coat, sweater. Though you can’t buy them for a song, their economy is long-run.”

In the years that followed, the magazine’s annual College Issues packaged capsule wardrobes as “campus wardrobes.” “It’s a basic, brilliant minimum, right for any campus,” read a piece in the August 15, 1941 issue titled “$100 Campus Wardrobe.” “It adds up to 16 parts: 4 skirts; 3 blouses; 2 jackets; 2 sweaters; 2 hats; 1 coat; gloves; moccasins.” The article deemed a two-piece suit and topcoat the “cornerstone of your campus wardrobe.” “Wear the skirt and jacket separately too,” it advised, “[and] fling the coat on over Everything” (yes, capital-E Everything).

The term was revived in the ‘70s by Susie Faux, who founded the London clothing shop Wardrobe in 1973. She described a capsule wardrobe as a “collection of a few essential items of clothing that don’t go out of fashion, such as skirts, trousers, and coats, which can then be augmented with seasonal pieces” (via Refinery29). In a 2009 post on her Confidence Tricks blog, Faux wrote, “Owning a well-thought through [sic] capsule wardrobe is a liberating experience – not least because it means you won’t feel the need to have a wardrobe full of clothes that you rarely wear in order to have the few that make you feel confident.”

In 1985, American fashion designer Donna Karan brought the capsule wardrobe concept back into the mainstream when she introduced her Seven Easy Pieces concept through her first solo fashion collection. According to Vogue, the seven pieces were a “bodysuit, skirt, tailored jacket, dress, something leather, white shirt, [and] cashmere sweater” that were “intended to take a woman from day to night, office to party.”

Today, mainstream fashion magazines and websites publish an ongoing flurry of articles on capsule wardrobes. In January, Queer Eye fashionisto Tan France hosted a MasterClass on the subject, and WhoWhatWear advised readers to strip down their closets to 37 pieces per three-month season. In March, Vogue suggested six capsule-wardrobe staples for spring 2021: a trenchcoat; a well-constructed purse; a long, lightweight dress; a semi-casual blazer; a sturdy pair of heels; and linen pants. Still, the contemporary capsule wardrobe should emphasize making your own rules and customizing your collection based on your personal clothing style and lifestyle. Curating your closet is less about buying specific items of clothing or maintaining a certain number of items, and more about a simplified approach that will save you money, time, and energy.

Quality and longevity are central tenets of the capsule wardrobe approach, but the emphasis on well-made items of clothing does not require you to shell out tons of cash for designer duds. The foundation of creating a capsule wardrobe is identifying the clothes you already own and wear most often, and selling or donating what you neither use nor love. And when you do need a new winter coat or pair of sneakers, investing in one quality item that will last your—or, at least, your cat’s—lifetime is likely to save you more money than buying armfuls of fast-fashion fads that will disintegrate into dust after approximately 14 minutes of wear.

The distinction between trendiness and style is key here. Capsule wardrobes are perhaps best exemplified these days by French dressing (but not the kind you put on your salad). France is often referred to as one of the world’s most stylish spots, but it also tends to be the least trendy. The je ne sais quoi that underpins the French style ethos is not a magical energy that radiates from any particular manteau or chapeau. In many cases, it’s a result of the effortlessness of picking outfits from an easy-peasy, streamlined collection of classics.

Resisting trend-following does not mean you have to resist following your own stylistic whims. Not every—or even any—staple has to be plain, neutral, or boring. Focus on what you know you wear often, whether that’s a pair of old Levi’s, a hot dog Halloween costume, or a sequinned pair of Rainbow Brite–inspired assless chaps. And if you do opt to stick to neutral colors and classic shapes, there’s always the option to jazz up your basic backdrop with accessories.

The trends of yesterday, today, and tomorrow drive consumer culture, which is inherently a culture of insufficiency. When it comes to clothing, being intentional about what to wear can reinforce the fact that a few essentials and favorites are enough. It’s like meal-prep for your closet: It makes the process easier—and often more healthy—in advance, so you can direct your time and efforts toward more important things in the future.

Top Image by Geneva Vanderzeil, A Pair & A Spare via Flickr

Five 2000s Trends That Must Die

Illustrator Marisol Muro On Being A Day-Glo Daydream IRL

Tags: Vogue , WhoWhatWear , Donna Karan , DKNY , Tan France , Susie Faux , vintage , fast fashion , sustainable fashion , minimalism , capsule wardrobes , fashion history
Support Feminist Media!
During these troubling political times, independent feminist media is more vital than ever. If our bold, uncensored reporting on women’s issues is important to you, please consider making a donation of $5, $25, $50, or whatever you can afford, to protect and sustain BUST.com.
Thanks so much—we can’t spell BUST without U.