Kamala Harris Goes Viral... Because of Her Shoes 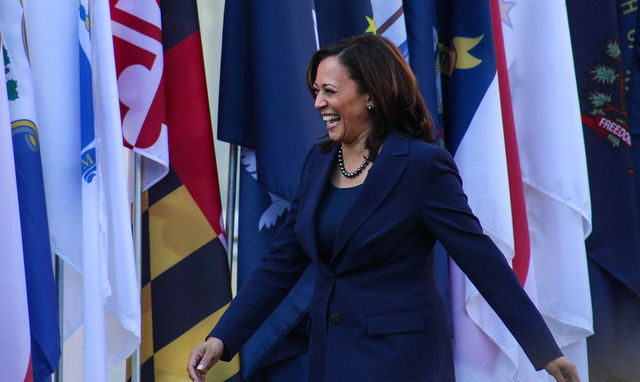 Let’s play a game. Without thinking too hard, what are the first (non-policy) things that come to mind when you think of Hillary Clinton? You might think of the media's obsession with her emails, Bill Clinton, or when she unironically told Millennial and Gen-Z voters to “Pokemon-Go to the polls.” However, what likely comes to mind are her signature pantsuits. Fashion choices have long been used to disqualify or delegitimize powerful women, and, undoubtedly, Clinton’s pantsuits were used as a tool of communication to the American people. In her book, What Happened, she explains, “I also thought it would be good to do what male politicians do and wear more or less the same thing every day.” Since Kamala Harris’s Vice Presidential nomination, people have been noticing something unique about her uniform. Straying from what male or female politicians have worn in the past, Harris has been sporting Converse sneakers.

First Black woman & first person of Indian descent to be nominated for national office by a major party.

Born in Oakland, California (for you birthers). Her first name is pronounced COMMA-lah. Get it straight.

Although the Vice President nominee has been seen in Converse throughout her own presidential run, by Tuesday, two videos of Harris’s arrival in Milwaukee had been viewed almost 8 million times on Twitter. Soon after, the internet exploded with comments and posts about the nominee’s Chuck Taylors.

It feels redundant at times to speak about what lawmakers are wearing, but how we dress, whether we hold public office or not, sends a message. Politicians from Louis XIV to George Bush have used visual cues to tell us about themselves. Harris is the first woman of color to be on a major party’s presidential ticket, and the first American politician to subscribe to sneakers on the campaign trail. Converse are an inoffensive, unisex, classic American shoe. These shoes symbolize the idea of “big tent politics” by being something people from all walks of life recognize and likely owned at some point.

“Until the 1990s, an 'unwritten rule' dictated that women could not wear pants on the Senate floor. That changed in 1993, after Moseley Braun, unaware of the rule, wore ‘a very nice Armani pantsuit’ to work,” Vox reported. Through this lens, Harris’s choice is significant, and in a way, a sign of a changing society, but it also leans into her “practicality.”

Kamala Harris arrives in Milwaukee for her first trip as the Democratic vice presidential nominee. She will be meeting with unions and business leaders this afternoon. pic.twitter.com/o9NbNQQc7g

After running a campaign situated closer to the center than other candidates like Bernie Sanders and Elizabeth Warren, the shoe fits. Converse are not revolutionary; rather, familiar and practical. The Washington Post reported, “At a time when many in the Democratic Party are calling for a different kind of leader... Harris’s shoes resonated with those who saw something more familiar in low-rise Chucks than the usual polished wingtips.”

Last week, Elizabeth Semmelhack, the author of Sneaker X Culture: Collab, told The Guardian, “The sneakers are acting as the sartorial equivalent of being willing to roll up her sleeves.” But perhaps it’s more subtle than trying to prove a point about hard work. It’s a hand reached out, not grabbing or pleading, but for a shake. They seem to say: “I’m like you.”

Wednesday Night Was Great For Women At The DNC