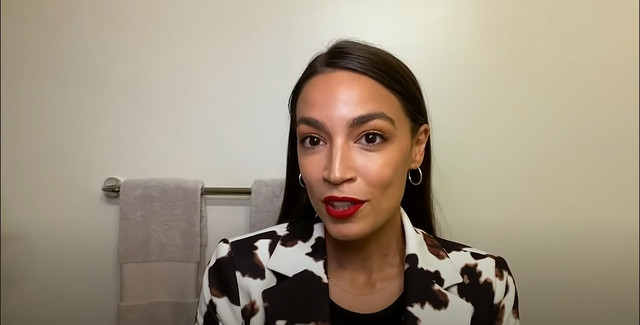 AOC has officially cemented herself as the coolest Congressperson yet.

In an interview with Vogue, Congresswoman Alexandria Ocasio-Cortez revealed her skincare routine and her makeup habits, “The reason why I think it’s so important to share these things is that, first of all, femininity has power, and in politics there is so much criticism and nitpicking about how women and femme people present ourselves,” AOC told Vogue. “Just being a woman is quite politicized here in Washington…. There’s this really false idea that if you care about makeup or if your interests are in beauty and fashion, that that’s somehow frivolous. But I actually think these are some of the most substantive decisions that we make—and we make them every morning.”

In fact, just last month, another congresswoman, Arizona Senator Kyrsten Sinema, came under fire for her choice in fashionable wigs.

Ocasio-Cortez emphasized that feeling beautiful and confident comes from the inside first, “If I’m going to spend an hour in the morning doing my glam, it’s not going to be because I’m afraid of what some Republican photo is going to look like…. It’s because I feel like it,” she said.

AOC’s makeup routine consists of a few basic staples like Nars’s lightweight tinted moisturizer, concealer, Fenty Beauty’s contour stick, brow pencil, crayon liner and mascara, and (yes!) a little bit of eye glitter. “As the youngest woman in Congress—and as a woman of color—it’s so hard to be taken seriously.… I would think, Man, [glitter] isn’t going to help me out. People already try to diminish me and diminish my voice as young and frivolous and unintelligent.” However, AOC has found that the extra step does the opposite. “It helps me feel better, and I feel like it helps make my eyes pop, so you know what? I was totally wrong.”

Then, the congresswoman finishes off the look with her signature bright red lipstick, her favorite being Stila’s Stay All Day Liquid Lipstick in the shade Beso. “One of the things that I had realized is that when you’re always running around, sometimes the best way to really look put together is a bold lip,” AOC says. “I will wear a red lip when I want confidence, when I need a boost of confidence.” The perk of using Stila is that the color, true to its name, stays all day.

AOC finished out the interview by emphasizing again that beauty comes from the inside first and “no amount of money or makeup can really compensate for loving yourself.”

“If you need a little boost or if you’re feeling particularly challenged that day, look in the mirror and say, ‘I’m the bomb, and I will make the world a better place in my own little pocket because that’s what I’m here to do,’” she said. “There’s something that you bring, and you need to know that, and that is the best beauty secret of them all.”