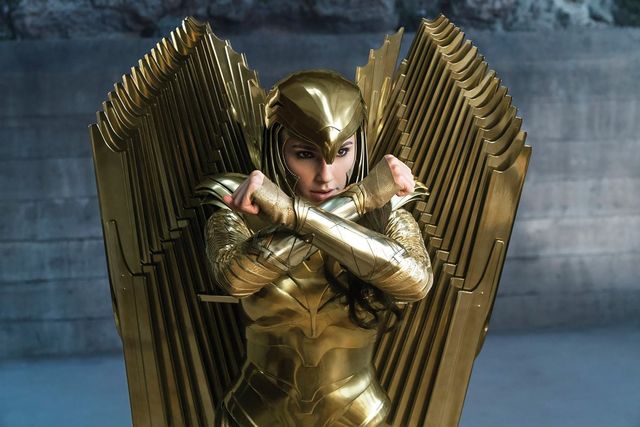 Wonder Woman and her alter ego, Diana Prince, have a stylist, and her name is Lindy Hemming. When the Oscar-winning Welsh costume designer behind The Dark Knight trilogy was brought on to dress Gal Gadot for director Patty Jenkins’ Wonder Woman, the heroine’s red, gold, and blue battle armor had already been created for her Batman v Superman: Dawn of Justice cameo. But in Wonder Woman 1984, set for release on August 14, Wonder Woman’s new winged golden battle armor is entirely Hemming’s design, taking inspiration from the comic books. Bringing it to life was certainly a superhuman task. The costume is made of a thin but strong, metallized urethane fabric that was formed in 3D-printed molds, and the full-body catsuit is covered in tiny metal plates meant to look like medieval chainmail. French fashion designer Thierry Mugler and Arthurian armor also influenced the look. “Patty and I wanted it to be so bright that [it would] shimmer inside itself and have an otherworldly quality to it,” Hemming says.

One of the most exciting things about Jenkins’ Wonder Woman franchise is its distinctly female gaze, which is evident in the costuming. “You [start by looking] at the comics, the previous films, and you [see that you] cannot cover her up,” Hemming says of Wonder Woman. “Your job is then to make sure that what you are going to see of her is not gratuitously sexy—that it looks fit. And that’s what she is: a fit, strong, attractive, and clever woman.” The costume designer says the same of Wonder Woman’s fellow Amazon warriors. “They live on their own,” she says. “The concept of being sexy for men is not in their vocabulary.” Their wardrobe was inspired by women’s sportswear and designer Azzedine Alaïa, whose dresses (most famous in the ’80s and early ’90s) were made of stretchy fabric so that women could actually move in them. 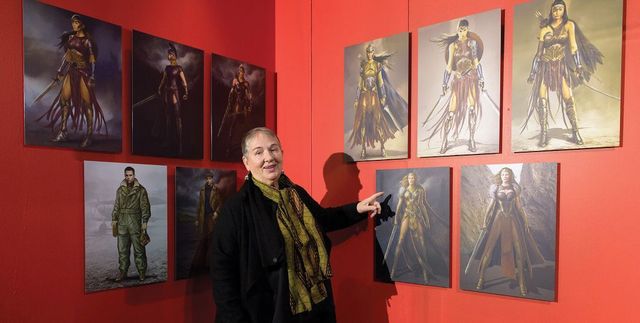 Lindy showcasing her designs at an exhibition in London

While you won’t see Diana Prince in any excessively ’80s fashion (Kristen Wiig’s character, Barbara Minerva, represents the era well, according to Hemming), you will see her in clothing that accentuates her essence. “The most important thing about a superhero is not to let them escape into too much fantasy,” Hemming says. “They have to keep their humanity.” She also reveals that her costumes are designed to not interfere with how the audience sees Wonder Woman: a symbol that strength in all forms is beautiful—battle armor or not.

FIT Students Are Petitioning For More Inclusivity In Fashion Classes