Yes, This Viral Photo is Circa The Flu of 1918. No, These Women Aren’t Wearing DIY Masks. 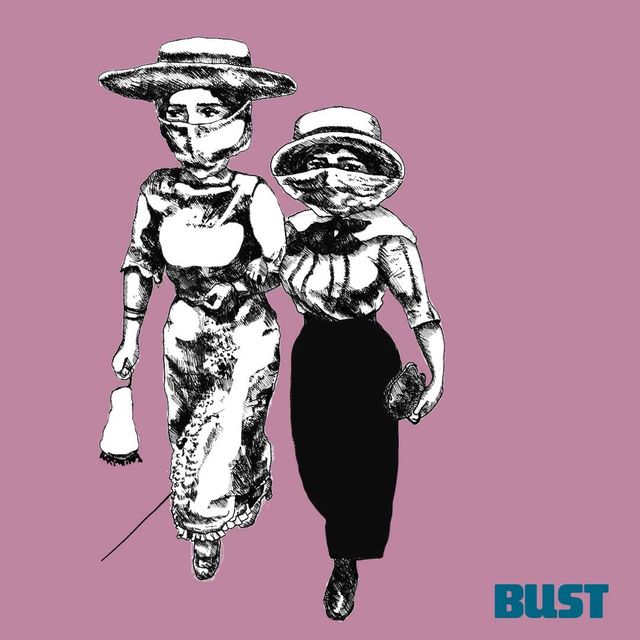 This photo of two women wearing what appear to be face masks has been going viral for months, garnering hundreds of likes and retweets every single time it’s posted. Each time the photo goes viral, the caption usually follows the same general idea: “These women wore masks during the flu of 1918, so can you!” “Women Made DIY Masks During The Spanish Flu,” “Women wearing masking during the influenza pandemic circa 1919, history repeats itself…” and so on and so forth. Seriously, within just the last few days the photo has been posted a number of times with a variety of captions, all aimed at giving folks on Twitter some insight into what the last major pandemic was like.

The first tell tale sign that this viral photo could be historically inaccurate is that the year it was supposedly taken in changes basically every time it’s reposted. Of course, this isn’t exactly the fault of people who repost the photo. It’s easy for things to get lost in translation, nobody is out here fact-checking clickbait-y Pinterest posts. But the more one looks into the origins of this photo, the clearer it becomes that this might not be the mask-inspiration everyone thinks it is.

Fact-checking website Snopes took a microscope to the viral photograph and found that the photo has no ties to the Flu of 1918. In fact, it wasn’t even taken during the time the infamous pandemic took place. According to the original caption of the photo, it was taken in 1913, five years before the Spanish Flu would begin. With the headline “Ladies’ Fashion From 1913” the caption describes, in German, that the women in the photo are sporting a “new, peculiar fashion” that emerged following the Balkan War, a war that took place in 1912 which ultimately resulted in the fall of the Ottoman Empire. “Women have recently been wearing the nose veil that has been used in Turkey for centuries,” the caption finishes. So no, these women were not wearing DIY masks to protect themselves from influenza but rather, borrowing fashion trends from Turkish culture. In other words, this was historical cultural appropriation.

Known as Turquerie, there was an art and culture movement that took place mainly in the 18th century (which likely bled into the 19th and 20th centuries) that aimed to emulate the lavish Turkish art and culture. Oserved by wealthy aristocrats, it became a trend to fully emulate Ottoman culture in Europe: listening to Turkish music, imitating Turkish fashion, drinking Turkish coffee, and so on. While the fashionable ladies in the mask photo lived more than a century after the height of the Turquerie movement, it is not shocking that wealthy Europeans were still taking notes from Middle Eastern culture then. What the German women were presumably attempting to imitate is known as a Yashmak, a Turkish face veil similar to a niqab. Women in Turkey still likely wore these veils or something similar to them until around the Republic Period or the Modern Turkish Period around 1920 when women began wearing scarves and shawls rather than full-face coverings.

Numerous other sites have gone on to debunk the popular photo, all citing that although the photo itself is authentic, the posts claiming these women were wearing veils as a medical precaution rather than a fashion statement are false. While these women were not wearing masks, that doesn’t mean masks weren’t a thing during the Flu of 1918. In fact, a little digging shows that albeit more bland than the so-called masks the women in the viral photo were sporting, people were certainly wearing masks to protect themselves during the Spanish Flu. When the influenza pandemic hit the United States, things looked a lot like they do right now. Schools, stores and theaters were closed, people were fined for gathering in large groups outside, and yes, people were asked to wear face masks.

ADVERTISEMENT
— US National Archives (@USNatArchives) May 6, 2020

The influenza pandemic of 1918 infected about 500 million people and resulted in nearly 50 million deaths, 500,000 of which were here in the United States. As the virus began to spread, masks became more and more popular throughout the U.S. and were even made compulsory in some states. "Wear a Mask and Save Your Life! A Mask is 99% Proof Against Influenza,” advertisements circulated by the Red Cross stated. "Obey the laws, and wear the gauze. Protect your jaws from septic paws,” song lyrics from the time boasted.

While many American began to wear cloth masks in order to protect themselves just like we all are today, however, there was also a great deal of backlash. A resistance group called the Anti-Mask League even formed in San Francisco in the fall of 1918 as a protest to the face mask mandates. Sound familiar? The parallels between the Covid-19 pandemic and the Flu of 1918 are clear. Looking back at photographs from the time can teach one so much about what it was like to live during the last major pandemic that spread across the world. While the photo you may have showed to all your friends is not, in fact, a historical record of DIY queens, there is still a lot we can learn from the past.

The Surprising History Of Women And Pockets

Need A Mask? These Women Are Grabbing Bras Instead