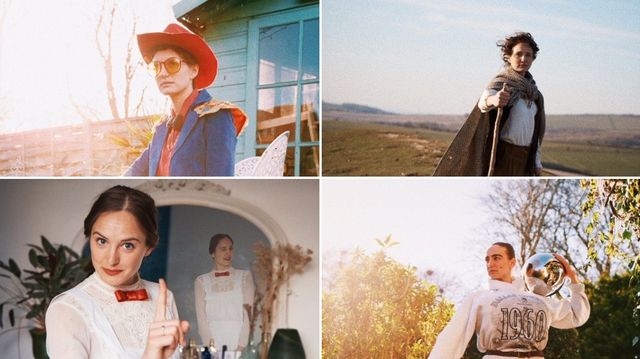 Logging onto Twitter has not always been a fun activity as of late. What was once a place for catching up on the latest in politics, memes and dry millennial humor has turned into a platform full to the brim with statistics about the growing global pandemic and panic. To say the least, good news has been very hard to find. That is, until, these two Twitter users took it upon themselves to brighten everyone’s days just the slightest bit in the difficult time.

Last week, Harriet Clare (@hazzleberryfinn) and Chloe Mead (@chloechubb) of the UK thought of the best quarantine activity: searching through their closets to find their very best “fancy dress” clothes and playing dress-up. The project started out when Mead put her hair up and Clare thought she resembled Little My from The Moomins. From there, they kept it going, taking to Instagram to get requests from their followers about who to dress up as next. With Covid Closet, the two have amassed thousands of likes and followers on Twitter with their daily character photoshoots, and even caught international attention as they began to trend, becoming a Twitter Moment on the Explore page.

Since, they have begun taking requests from their followers for which characters to portray next, their photoshoots getting wackier and more extravagant each and every day. "It is a combination of years of charity shop shopping,” Clare said in a recent interview with Insider. “The complete inability to throw anything out, the fact that Chloe's Mom and Dad (both teachers) have kept costumes and props from countless school plays, and a little bit of creativity,"

With Mead dressing up as your favorite stars and Clare (who is a photographer by trade) taking the photos, here are the looks the duo has taken on so far with #CovidCloset:

Beetlejuice (w/ a cameo of @hazzleberryfinn as Lydia Deets)

#CovidCloset has brought positivity into countless people's lives during these often dark and anxious times as well as inspired people to do something fun inside while we all stay home and practice social distancing. So, next time you’re bored in the house, think about digging through your closet and getting a little creative. Thanks to Mead and Clare, there’s no shame in playing dress-up like its good ole’ days.

7 Indoor Hobbies To Try Out While Quarantining

Feeling Stressed? Snack On These 6 Foods

Need A Mask? These Women Are Grabbing Bras Instead