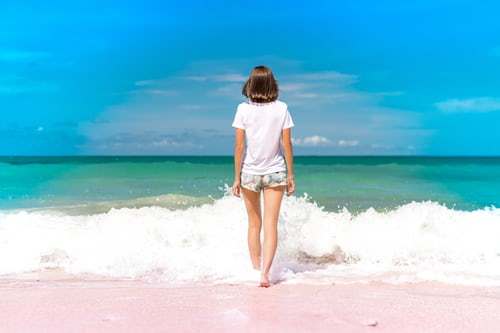 Born out of a father’s concern over his transgender daughter’s comfort and safety at the beach, Canadian dad Jamie Alexander created a line of swim bottoms for his child and those like her around the world. Before a family vacation to Panama, Alexander was worried that his then 11-year-old daughter Ruby might be in danger or discomfort at the beach. Though he didn’t have any firsthand experience with fashion or design, Alexander created swim bottoms that have a compression technology — and from that, Rubies were born.

Alexander says that he and his wife Angela had, prior to Ruby’s transition, dressed her in boy’s clothes when it came time to go to the gym or to go swimming. For their family vacation, Ruby wanted to do away with the baggy attire she’d been wearing for such occasions and dress like any other girl going to the beach. With her wish in mind, her father reached out online and saw that he and his family were not alone. As a member of a Facebook group for parents of trans kids, Alexander found that the matter of beach attire was a shared for numerous families.

While families and friends can create a safe space for people in the trans community, kids like Ruby are unfortunately at risk of being harassed or harmed, leading them to be victims of hate crimes. Plus, as Alexander writes on his website, every trans girl should be as comfortable in her clothes as her cisgender friends.

With a background in the tech industry, Alexander began his mission to seek out guidance and assistance on how to go about creating swimwear bottoms. Ultimately, he presented his concept to the Fashion Zone at Ryerson University in Toronto, Canada’s leading incubator for fashion and technology-inspired startups.

Together, Alexander and Fashion Zone have worked on ten versions of the bottoms that are being tested and improved upon thanks to the feedback of 25 transgender girls from Canada, the U.S., and Australia.

Named after his daughter, Rubies only offer two choices of bottoms as of right now: black or a sparkling pink, priced at $44. The line doesn’t feature any bikini tops, but they do sell tees that bear the Rubies’ slogan, "Every Girl Deserves to Shine."

What's up next? Alexander says, “I want to send a thousand pairs for free to kids who can't afford them.” The proceeds made from the sales of the featured t-shirts will fund that goal. Alexander is already working on new installments for the line, conceptualizing one-piece suits that will use the same compression technology, and he hopes to create leggings that will be useful for other activities.

Tags: Jaime Alexander , #girldad , rubies , Ruby Alexander , transgender , swimwear , Toronto
Support Feminist Media!
During these troubling political times, independent feminist media is more vital than ever. If our bold, uncensored reporting on women’s issues is important to you, please consider making a donation of $5, $25, $50, or whatever you can afford, to protect and sustain BUST.com.
Thanks so much—we can’t spell BUST without U.