Is Dior Just Capitalizing on Femini$m? 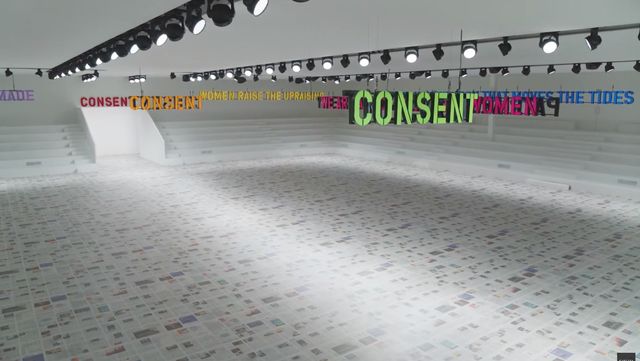 Back in 2017, fashion giant, Dior released a white t-shirt with “WE SHOULD ALL BE FEMINISTS” (a nod to Chimamanda Ngozi Adichie book of the same name) pasted in black lettering across the front. Initially revealed at a fashion show and right at the beginning of the Trump Administration and #MeToo moment, many were impressed to see a company as big as Dior taking a stand and making a statement. Feminist celebs like Rihanna started repping the chic tee, and it was announced that a portion of the proceeds from it’s sales would go to her charity the Clara Lionel Foundation, which helps to fund education, heath and emergency response programs around the globe. The only problem: The cotton t-shirt had a retail value of $710 and only a small percentage of that $710 went to the charity.

The next year, Dior came out with a striped t-shirt with the phrase “WHY HAVE THERE BEEN NO GREAT WOMEN ARTISTS?” on the front, a nod to another famous feminist text. Once again, folks were confused over whether to be excited that the fashion house was continuing to make feminist statements, or dissapointed that they were capitalizing off of a social movement without actually donating any money to the movement in question. One British news outlet, Grazia, even raised the point that Dior used the words of Adichie and Linda Nochlin without giving them any credit.

Now, Dior is back at it again and people are just as conflicted as ever. At a runway show in Paris on Monday, Dior decorated the room with large neon signs that read phrases like “CONSENT,” “PATRIARCHY = OPPRESSION,” “WOMEN’S LOVE IS UNPAID LABOUR” and “WE ARE ALL CLITORIDIAN WOMEN.” The latter is a reference to a concept created by Italian art critic Carla Lonzi. The set was cool to say the least, and as far as anyone could see, there weren’t any new $800 t-shirts boasting quotes from feminist theorists without credit. This season, Dior was one of if not the only major high fashion company that incorporated social justice into their line or shows. It’s great that the movement has made it’s way into the mainstream and more and more people are spreading feminist messages and making their voice heard. But while we are all patriarchy smashing clitoridian women, there is something to be said about the confusion some people were feeling with the Dior t-shirts and this latest stunt. The question must be asked, is Dior capitalizing off of feminism? Is consumerist feminism as a whole innately problematic?

To call Dior and their supporters out for capitalizing on feminism would be hypocritical. I myself have more than a few shirts with feminist slogans painted across the front from Handmaid’s Tale quotes to witty Shakespearean references. I even bought a pussy hat at one point (which I’m a little more reluctant to admit). But when consuming these goods, and championing companies like Dior for making them, one has to ask questions like: Where is the money I spent on this product going? Where are these products being made and by whom? Are the individuals making my “The Future Is Female” sweater being paid a fair wage and working in safe conditions? Are these items sustainable? Many feminist news outlets and theorists have tried to tackle this tricky topic. From Jessa Crispin’s critique of mainstream feminism in “Why I Am Not a Feminist: A Feminist Manifesto” to Andi Zeisler of Bitch Media’s “We Were Feminists Once: From Riot Grrrl to CoverGirl®, the Buying and Selling of a Political Movement” the topic has been discussed and debated time and time again with no real consesus to be made about what to do or how to feel about the issue.

The main argument here is that “pop-feminism” doesn’t actually do anything to offer solutions to many of the problems feminism seeks to fix. In fact, the marketing of pop-feminism, which causes people to consume, only feeds back into capitalism and therefore the oppressive patriarchy. In the case of Dior, some might argue that they are using feminism in an attempt to draw more young people into purchasing or striving to purchase their luxury, inaccessible products. An article on the topic in Refinery 29 also noted that if they were trying to promote messages of equality for all and dismantling the patriarchy, shouldn’t they have cast more diverse models as well as plus-sized and older models to walk in the show?

While the mainstream feminism we are seeing used in marketing campaigns for beauty, fast fashion, and luxury product companies deserves to be critiqued, feminism should be mainstream. Adichie was not lying when she said we should all be feminists. However, we should all be intersectional feminists, and it remains to be seen whether pop-feminism acutally has anything to do with the roots and values of the larger feminist movement. It might be unfair to critique Dior, as one would hope that even if the fashion house is taking part in mainstream, consumerism feminism, their messages are still coming from a good place. So what is the solution here? Honestly, there is no clear answer to that question. To start, fashion houses like Dior should make a commitment to donating the funds they make from their feminist products to feminist organizations and ensuring that their products are made in a sustainable, ethical manor. For the average feminist who wants a super dope t-shirt that expresses their views at an affordable price, purchasing items from small companies and artists on platforms like Etsy might be the best answer. Until we can completely tear down the patriarchy and capitalism as a whole, which trust me, we’re working on, those seem like a few plausible solutions.

This Fashion Company Is Dressing Female Candidates For Free

Tags: Dior , Christian Dior , Fashion Week , Pop-feminism , Mainstream feminism , consumerism , capitalism
Support Feminist Media!
During these troubling political times, independent feminist media is more vital than ever. If our bold, uncensored reporting on women’s issues is important to you, please consider making a donation of $5, $25, $50, or whatever you can afford, to protect and sustain BUST.com.
Thanks so much—we can’t spell BUST without U.