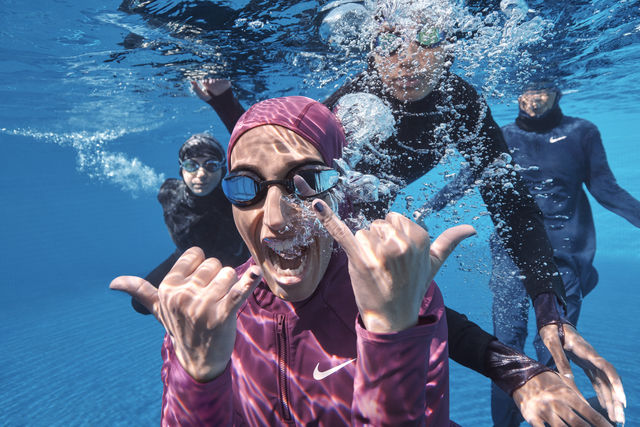 On Tuesday, Nike announced they will be releasing The Nike Victory Swim Collection-- a line of swimsuits catering to modest women, particularly those in the Muslim community.

The line will include a full coverage swimsuit, a swim hijab, swim tunic top, and swim leggings. The material is light and breathable to allow full flexibility and performance for water sports. The line is a huge step forward for the Muslim community, after various cities in France have banned the wearing of burkini swimsuits at public beaches and pools in the name of “security and secularism.” We only speak in the name of inclusion here!

Nike was inspired to work on this inclusive collection after the release of their groundbreaking Pro Hijab, made of a breathable mesh that allows Hijabi women to be active and still perform at their peak. Hijabi athletes all over the globe agree Nike’s new modest active lines are game changers for Muslim women in sports. Emirati pro figure skater Zahra Lari is the first person in her sport to wear the hijab in competition. “I feel super light and confident in this,” Lari said in a statement. “It doesn’t weigh you down, and it helped me swim better. It’s so different than any of the swimsuits I’ve ever seen, and I know I can wear this confidently.”

Nike’s VP Creative Director Martha Moore expressed Nike’s mission in accommodating athletes of all genders, backgrounds and body types, saying, “The more we listened, the more possibility we saw to serve female athletes in new dimensions. “As we continue broadening our vision for innovation, we’re excited to inspire more women to see themselves in sport by thinking creatively and designing inclusively. To us, Nike Victory Swim Collection shows the power of innovation to invite all women to discover the joy of sport.”

The Nike Victory Swim Collection will be available February 1st, 2020 on nike.com.

A Feminist Report From The U.S.-Mexico Border

Tags: Nike , Victory Swim Collection , Hijab , Hijabi women , Muslim women , Muslim community , burkini ban , swimwear , Pro Hijab , athletes , sportswear , activewear , fashion
Support Feminist Media!
During these troubling political times, independent feminist media is more vital than ever. If our bold, uncensored reporting on women’s issues is important to you, please consider making a donation of $5, $25, $50, or whatever you can afford, to protect and sustain BUST.com.
Thanks so much—we can’t spell BUST without U.