It's Fluevog Season — Celebrate With This New Book 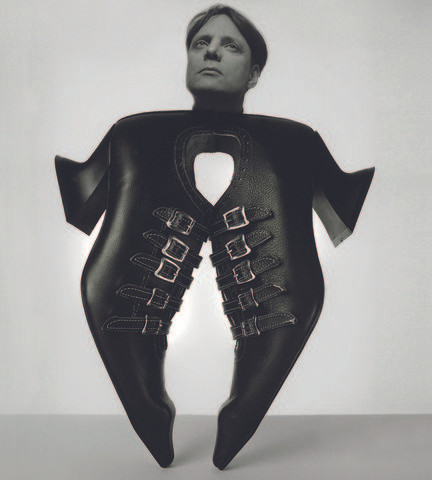 John Fluevog is not like other designers. Scratch that — he’s unlike most other people on the planet. He’s never conformed to trends, he’s only created them. In his new book Fluevog: 50 Years of Unique Soles for Unique Souls, Fluevog paints an intimate and colorful portrait of his own illustrious career through personal images and designs of his iconic footwear. When it comes to his inspirations for new designs, Fluevog looks to the world around him for guidance. “I take note of what my mind wants me to see — a color, a shape, a fragrance, a sound, a place, a person, a dream — and then I turn it into a shoe,” he writes. His three biggest inspirations, however, will always be spirituality, cars, and, of course, fashion.

Fluevog began his career in 1970 with the opening of his store Fox and Fluevog in his hometown of Vancouver. One of the first designs Fluevog made for their shoe store harkened back to the Victorian-era with a bold buckle tea-strap loafer. Even back then, the shoe was cutting edge for the time and went against the mainstream.

In the 80s, Fluevog went solo and opened the now trademark John Fluevog Shoes, opening locations throughout the United States. He was (presumably) the first person to sell Doc Martens in North America, even making his own embellished version of the now-beloved combat boot style with brighter patterns and colors. His signature “Angel Soles” set him apart from his competitors, made from 100% natural latex. The idea for the soles came to Fluevog in a dream, and he has certainly made it a reality. The soles are all branded with the phrase, “Resists alkali, water, acid, fatigue and Satan.”

Fluevog's shoes became a fashion staple in the punk and grunge movements. His eclectic edge and unwillingness to adhere to trends resonated with the counterculture youth of the day who were tired of the mainstream — not to mention the strength of the soles could withstand the roughest and toughest of mosh pits. Fluevog solidified himself as a changemaker in the industry, and has never withered from his spiritual vision of fun, unique, and quality footwear. Artists and celebrities from Madonna and Alice Cooper to Lady Gaga and Beyoncé have all been loyal fans of the Fluevog brand. After 50 years in the business, he now has 27 stores across North America, Europe, and Australia. The Fluevog train has shown no signs of stopping anytime soon, and we can’t wait to see what he comes up with next!

Join Fluevog on his anniversary tour as he reads from his new book and signs personal copies for those who attend. You can RSVP here!

Here's How You Can Make Your Boots Survive A Blizzard

How Activist Candace Reels Expresses Herself Through Fashion