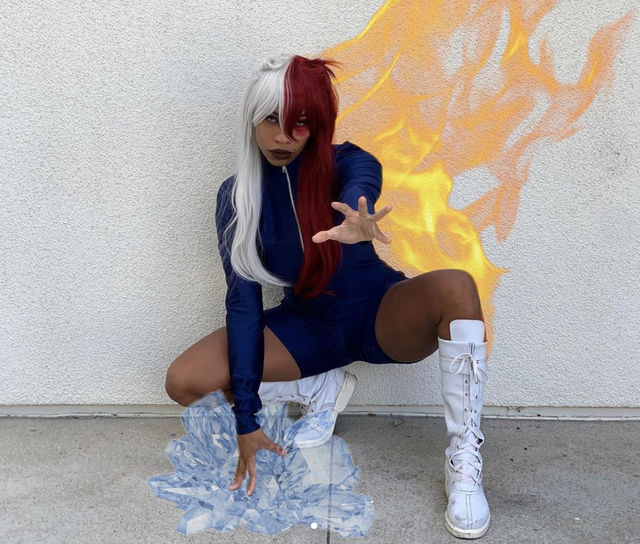 For those of you who aren’t familiar with this beloved internet muse yet, prepare to be amazed! Kiera Please is a popular cosplayer and musician based in Los Angeles. She is known for channeling all your favorite characters from across the pop-culture universe with her own effortlessly cool style. She’s morphed into Daria, Coraline, Hermione Granger, Mufasa, Cruella de Vil, Beyoncé, and all the leading ladies of Game of Thrones—if you name it, she’s probably done it. If you’re still looking for a last minute costume idea before Halloween, I suggest making a quick visit to her Instagram page for inspiration.

I had the chance to talk to Kiera about her journey into the world of cosplay, her advice for women entering the community, and her exciting new music dropping soon. She had just returned home to L.A. after spending the weekend in Atlanta for the Afropunk festival. Her tone of voice is exactly as I expected it to be: warm, raspy, and filled with gratitude. It felt like I was catching up with an old friend. We began our conversation by discussing our shared bewilderment at FKA Twigs’ highly choreographed set (I attended the festival in Brooklyn to see her performance this past August). “[She]’s such a good dancer!” she exclaimed. Once I knew she was a Twigs fan, I was put at ease for the rest of our conversation.

So how did you first get into cosplaying?

I want to say around 2016-17. I was watching this show Steven Universe, and I really connected with the character Garnet. People always told me I reminded them of Garnet and that I looked like her. So I decided to do a Garnet costume for Halloween, and people really loved it. It wasn’t perfect, but it was really fun putting it together. That’s how everything started. I didn’t realize that what I was doing was cosplay. I kind of fell into this world on accident.

Happy #blackhistorymonth! I know it's not overtly stated that Garnet is black (& I knw theyre a gem and not even human) but theyre one of the many characters of color that empower me to be a strong black woman. For the #28daysofblackcosplay I wanted to show that not only can you be black and cosplay, but honor some bad@ss characters of color as well and also just some strong girl leads in general)! I'm working on Storm and Allura rn, but I'm also up for any suggestions you have. & pls lmk if you do any commission work!! #cosplay #sucosplay #stevenuniverse

Who are some of the characters that inspired you to begin making your own costumes?

All of my favorite nostalgic characters from the ’90s and 2000s, like Princess Kida from Atlantis, or Penny Proud from The Proud Family. Those are the characters from my childhood and made the biggest impression on me. Those are always going to be my greatest inspirations when I’m making a costume.

You’re probably the most visible Black female cosplayer on the internet right now. Do you feel like the community of Black cosplayers has grown since you’ve been on Instagram? Or do you feel like it’s still very hidden?

From when I started, which was only a couple years ago, it’s definitely grown. I’ve seen a lot more people feeling more comfortable and confident in dressing up. When I go to certain conventions, I definitely wish there was more diversity. I always think there’s going to be room to grow with that. A lot of people have come up to me at conventions and things and said, “You’ve inspired me to start doing cosplay”. It’s really inspiring to meet people physically who appreciate what you’re doing.

With Halloween around the corner, there’s a lot of pressure on women to prioritize sexiness when it comes to costumes. Do you ever feel that pressure when you’re creating your looks?

I never put that pressure on myself. I just go with what I feel like the character is to me. If the character I’m portraying is sexy, or just casual, that’s what I’m channeling. When I choose a character, I wanna do it because I like it. If I don’t feel comfortable or excited about it, then it’s not the look for me.

Speaking of Halloween, there’s a lot of tension surrounding cultural appropriation and costuming. You’ve portrayed a range of characters across all genres of pop culture. What’s your advice on how to portray a character and still be respectful to the culture or fandom in which they originated?

Well I’ve done a lot of characters that weren’t originally imagined as Black women. I think it’s okay to reimagine the character. If it’s a character I can identify with that isn’t wearing anything sacred to a specific culture, then I can do the costume in my own style that’s true to me. I would say, if you want to do a character that’s really important to another culture or fandom, just do your research. Don’t go in with a blind eye. Always be respectful.

How have you overcome the challenges of being an up and coming female figure in a community that is usually associated with a male audience?

I’ve definitely faced some challenges as a Black woman doing this. I have received some hate for doing certain characters. People who told me “Oh, that character doesn’t look like you” or “You can’t do that character because you’re black.” People telling me that I don’t have the right body size to play a character, I’m too curvy and this and that. Just a lot of people nitpicking you, trying to make you doubt yourself. I don’t pay attention to it. I’m just doing this for fun. When that negativity starts to get to me, I just take a break to be more aware and refocus my energy. I meditate, I read, I listen to music… I reconnect with myself and focus on what I want to do and why I began doing this in the first place. I make sure not to let myself spiral down with the negativity.

What advice would you give to aspiring female cosplayers out there who feel discouraged from entering the community?

I would say, really focus on doing it because you love to do it. Don’t put any energy into the hate or fear you’re seeing online. You’re able to do whatever you want to do. Just go for it, even if it’s something very small. You can do a character that is just wearing jeans and a certain graphic shirt, or play with makeup. You can baby step your way into the community. Reach out to people you know who are cosplaying, either in person or on social media. I’ve met so many great people and made friends through doing this. There are a lot of women in the cosplay community that will be there to support you.

You’re also a singer! You released your first album Infinite last year. Do you have any upcoming projects we should look for in the near future?

Yes! Okay, I’m so excited about this. I’m going to release a song on Halloween.

Yes, I can’t wait to drop it. I wrote the song about Adventure Time, which is one of my favorite shows, but it’s still relatable. It’s not completely about the show, so even people who aren’t familiar with the characters will be able to get into it and relate to the lyrics. It’s a super cute song. It’s more of a rock-y, pop song in the spirit of Marceline from the show. I’ve been working on my own comic-style animation for it too, so it’s been so fun to work on it.

We’ll certainly be listening to Kiera’s track come Halloween night. We’ll also be looking forward to whatever costume she dreams up on the holiday as well. To follow her daily costumes and her cosplay, follow her @kieraplease on Instagram. To listen to her music, you can find her page here on Spotify.

How Activist Candace Reels Expresses Herself Through Fashion

No Trick, All Treat! 8 Totally Sweet Pieces Perfect For The Season