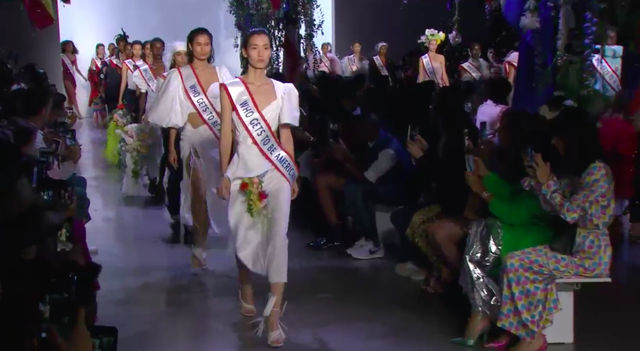 At the Sunday showing of his Spring 2020 collection at New York Fashion Week, designer Prabal Gurung used his designs to pose the complex and increasingly relevant question: Who gets to be an American?

Gurung told the Associated Press that “America to me is the sum of all things.” Gurung brought that sentiment to life by mixing classic Americana imagery—cowboy boots, denim, and tie-dye—with a more modern sense of America. The show featured diverse casting that included POC and plus-size models, further emphasizing Gurung’s twists on American staples. One look, for instance, featured a slouchy fit denim jumpsuit which was paired with a rose-patterned bralette and big hoop earrings.

The show also drew on the contrast between high and low-brow fashion. Gurung explained, “There’s the pragmatism of T-shirts and jeans and there’s the fantasy and beautiful glamour of the evening wear.” He continued “I wanted to marry those two and really question, who does this country belong to?”

While this question undergirded the entirety of the show, it was overtly posed in the show’s finale. All the models walked the runway wearing a beauty pageant-like sashes with the question—who gets to be American? —emblazoned across them. The sashes speak to the privilege that comes with being accepted as an American but also, potentially, to the superficial rubric used to decide that question, which Gurung, an American citizen since 2013, is all too familiar with.

Previously, the Nepalese-American designer brought up his interest in redefining America in a meeting and received the response “Well, you don’t look American.”

“It was very clear to me what the implication was,” he told the Associated Press.

This isn’t Gurung’s first time merging fashion with politics. Feminist icons like Gloria Steinem provided inspiration for his Spring 2017 collection, and Fashionista reported that Gurung’s Fall 2017 collection, which debuted three months after Trump’s election, featured models wearing graphic t-shirts with the phrases "Our minds, our bodies, our power," "Nevertheless she persisted," "I am an immigrant," and "We will not be silenced."

Gurung has also been very outspoken about his experience as an immigrant and his journey to achieve the American Dream. In a Women’s Wear Daily article following Gurung as he completed the process of gaining American citizenship, he said “To be able to come to America, knowing no one, and build something… There’s the whole thing about chasing the American dream, and I am living proof. This particular day was so far away for me and now it’s happening. It’s really emotional for me.”

The crisis at the border and increasingly concerning ICE arrests add a grim urgency to Gurung’s question about what it means to be “American.” However, Gurung’s show ultimately highlighted the positive message of inclusivity. Carrying on the sentiment of "Stronger in Color," one of the designer’s central slogans, Gurung juxtaposed images of America’s national flower, the rose, alongside bouquets of varied flowers that the models carried or wore as flower crowns. Gurung stated that the variety of flowers signified “welcoming different kinds of people in this world, in this country.”

header photo screenshot via Prabal Gurang livestream on The Cut