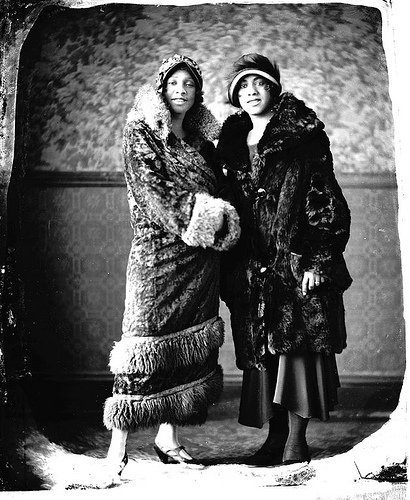 A. L. Mencken first popularized the word "flapper" in a 1915 essay for The Smart Set. His take: “She is opposed to the double standard of morality… She seldom blushes; it is impossible to shock her… It is a delight to see her sink her pearly teeth into a chocolate, macaroon, even a potato.” When Mencken wrote his piece, American women still did not have the right to vote—but that would soon change. Suffragists were changing the conversation and challenging social mores, as seen in this brutally frank 1918 pamphlet advising women on marriage. 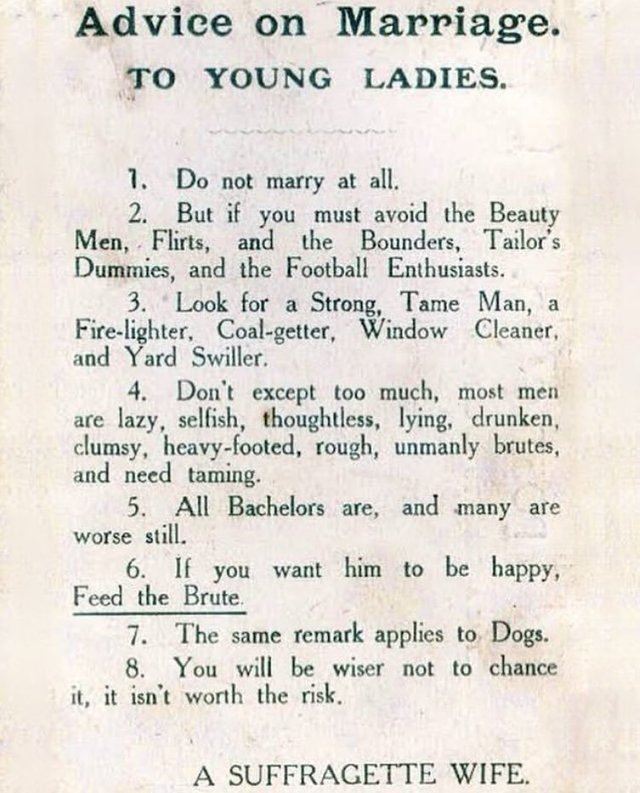 Newspapers rushed to explain this new phenomenon to alarmed parents by outlining the thirteen qualities that a flapper must possess, including “flapper curl on forehead,” “exposed knees,” and “flat-heeled, little-girl sandals.” 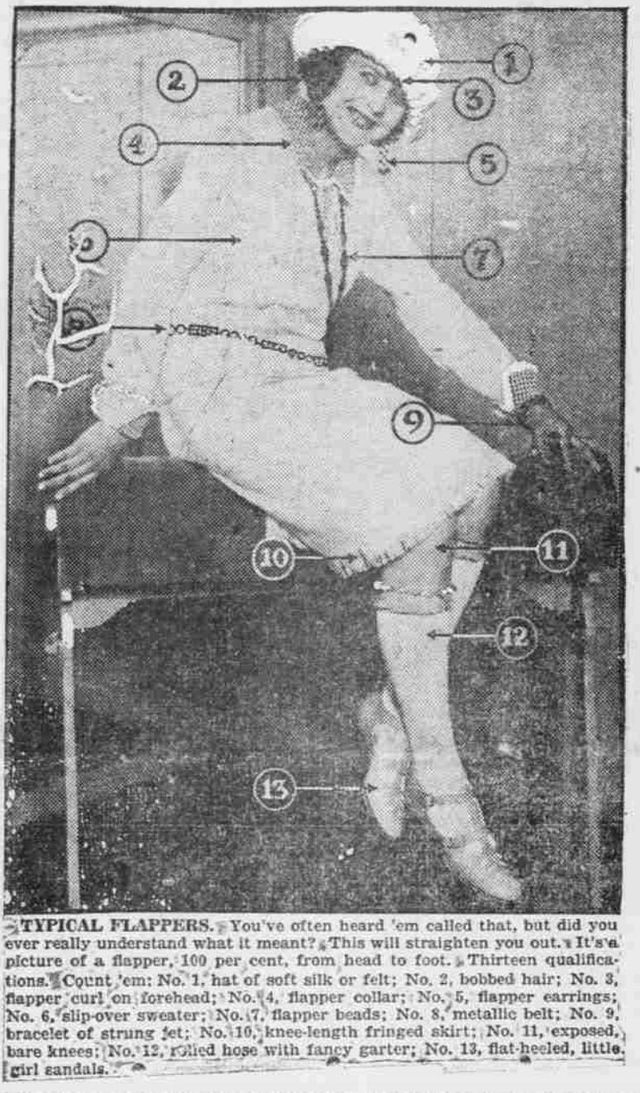 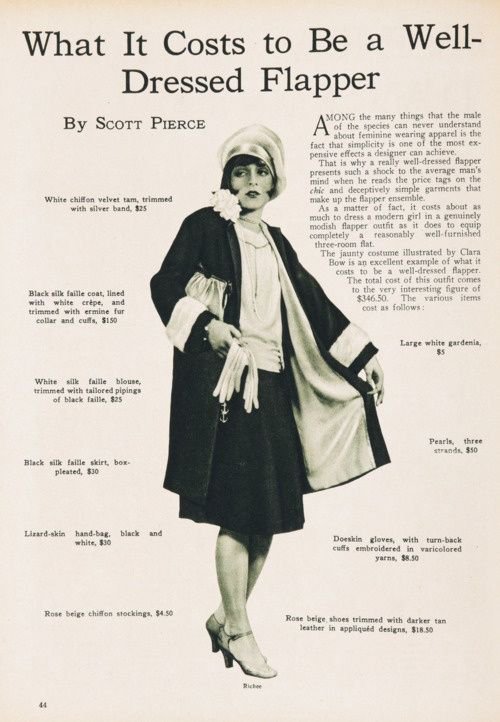 Of course, it wasn’t long before people began policing flappers’ style. The YMCA distributed this pamphlet, comparing “proper” and “improper” dress (which look strikingly similar to the modern eye) in their campaign against “certain modern tendencies.” 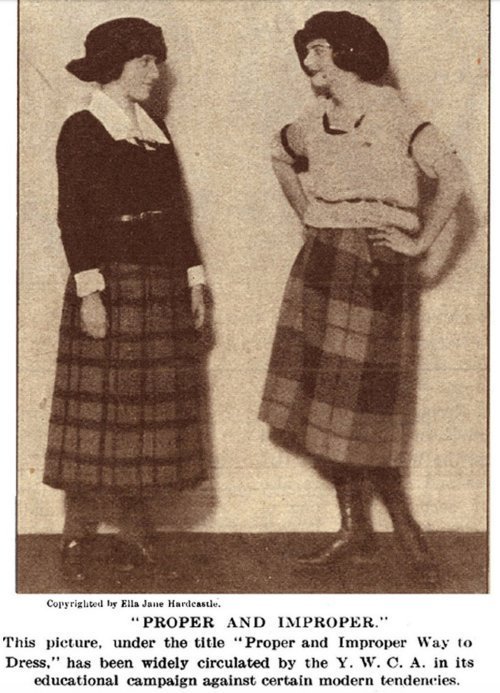 Some cities passed an ordinance regulating women’s bathing suits: skirts had to be within seven inches of the knee. Enterprising flappers devised a work-around; they wore slit skirts, featuring a vent that started near the waistline and widened as it fell to the hem.

Continuing their defiance, flappers created Flapper Magazine (tagline: “Not for Old Fogies”) and invented their own slang. A “biscuit” was a “pettable flapper”; a “boob tickler” a “girl who entertains father’s out-of-town customers”; and “sweetie” meant “anybody a flapper hates.” 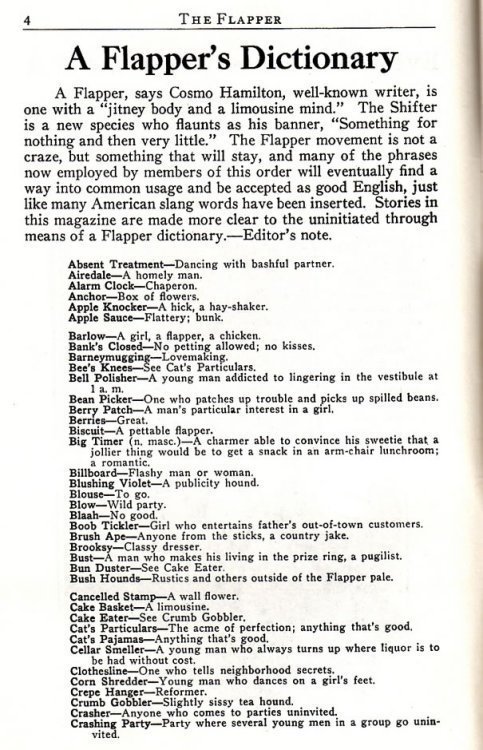 Disaster, perhaps, seemed imminent. Newspapers widely reported the “first flapper tragedy.” Irene Granstedt, age 14, was known around her Utah town as “the baby vamp,” and shot her 17-year-old boyfriend because he called her “terrible names.” She claimed the gun had gone off accidentally… 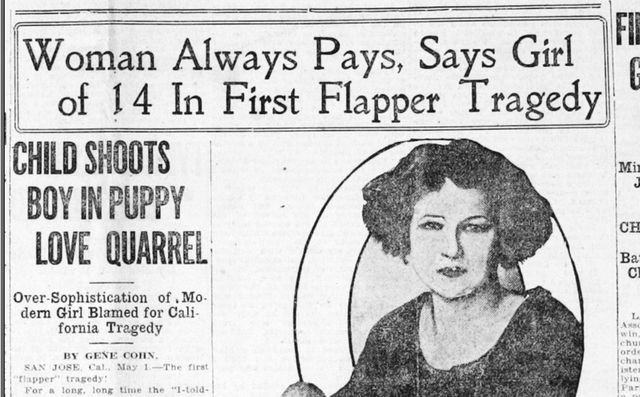 It wasn’t long before flappers formed the “Society of Shifters,” a gang devoted to shaking victims down for cash and silk stockings. They had a secret handshake and insignia that signaled an openness to “intimacies that self-respecting girls would ordinarily resent.”

The backlash intensified. Concerned that flappers made men appear more effeminate, the male students of Syracuse University organized a club to protest “smoking among women, women who wear flopping galoshes, and the intrusion of women into realms heretofore restricted to men.” Society was also appalled by “middle aged flappers” like Imogene Remus, a character in The Ghosts of Eden Park: “The woman who finds herself mimicking the voice, mannerisms and dress of the poor little flapper girls of any age are a greater menace than the 16-year-old kind.”

In the Chicago Defender, a popular black-owned newspaper, advice columnist Princess Mysteria railed against middle-aged flappers. Her response to one woman: “There is something decidedly wrong with you and before many days you will be forced to account for your deficiencies.”

But there were a few occasions when everyone celebrated flapper culture. One occurred when 10-year-old Mildred Unger performed one of the most incredible movie stunts of all time for the 1927 film Wings: She danced the Charleston on the wings of an airplane 2000 feet in the air.

Some anti-flapper groups tried a subtler approach: reverse psychology. These “ten commands for flappers” made the rounds, and included such advice as “power and rouge cheapens you,” “do not dance disgracefully,” and “save your kisses for the ONE man.” 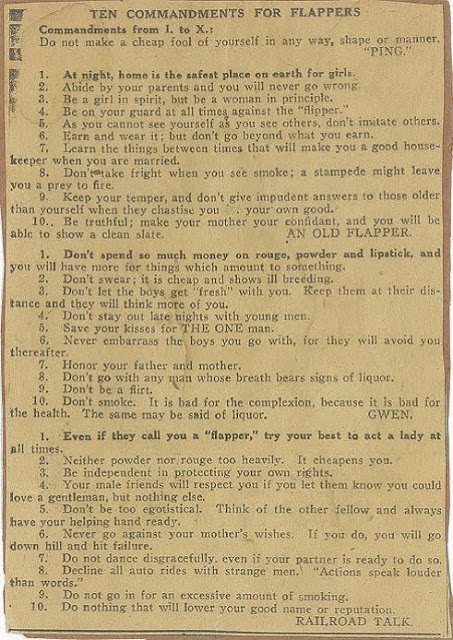 Of course, this didn’t fly with everyone—including Mabel Willebrandt, the prosecutor who went after George Remus. She had surprisingly progressive views: “When I was a girl, it was considered a sin to kiss a man before one was engaged. Now this so-called flapper kisses when she likes, and she is none the worse for it.”

Learn more about Willebrandt, Imogene Remus, and the 1920s in “The Ghosts of Eden Park,” available for preorder now.

This article originally appeared as a Twitter thread and is reprinted here with permission.

Flappers: Were They the Riot Grrrls of Their Time?

Karen Abbott is the New York Times bestselling author of, most recently, Liar Temptress Soldier Spy, named one of the best books of the year by Library Journal, the Christian Science Monitor, and Amazon. Her new book, The Ghosts of Eden Park—a "riveting combination of social history and true crime" (Booklist)—is out on August 6. Find her on Twitter (@KarenAbbott) or Instagram (@karen_abbott).