The Persistence To Wear Pants: How Katharine Hepburn Commanded Independence With Fashion 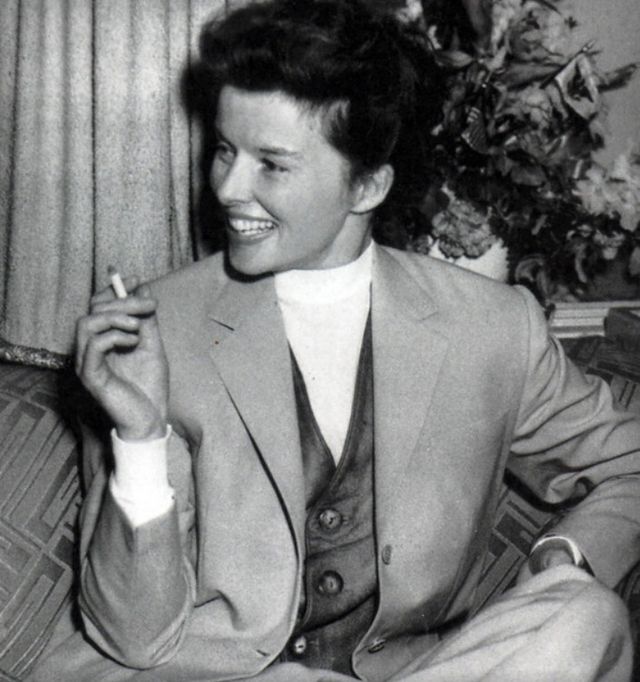 “I never realized until lately that women were supposed to be the inferior sex.”

Despite being known as Hollywood’s First Lady of Cinema, Katharine Hepburn was unabashed about maintaining a sense of self and independence. Born in 1907 to a doctor and a suffragette, she was encouraged to be opinionated and honest. Often described as a tomboy, Hepburn was an athletic and energetic child. She adored her older brother, Tom, and at 9-years-old, she shaved her head and dressed in his clothes.

Her relationship with her brother had a lasting impact on the way she lived her life, especially when, at 13-years-old, she found her brother’s body after he had hanged himself. Following this tragedy, she took on her brother's birthday as her own. In Charlotte Chandler’s book, I Know Where I’m Going: Katharine Hepburn, A Personal Biography, Hepburn describes her personal philosophy as “Onliness,” explaining, “I wanted to be independent, to separate myself from others and never again care so much about another person, so I would never feel the pain I felt when Tom left me.” 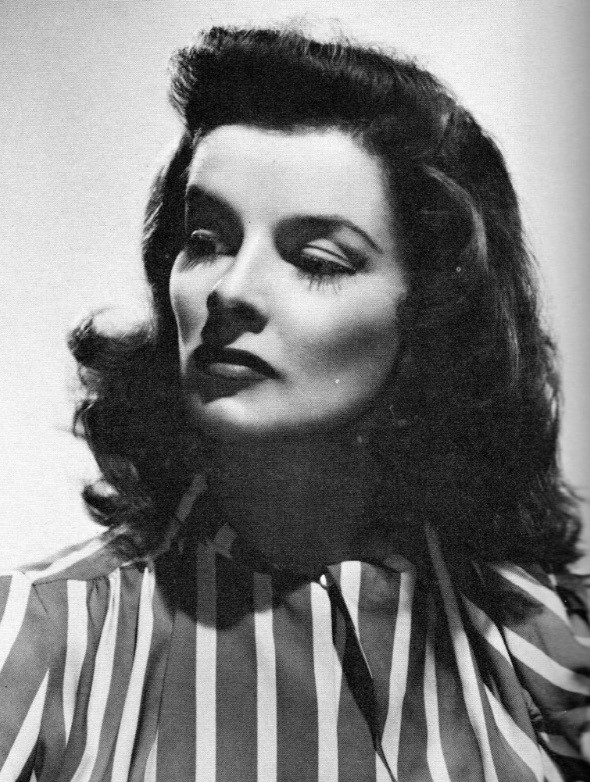 After graduating from Bryn Mawr College, Hepburn signed with the RKO agency and was off to glamourous Hollywood, where, in the 1930s, sequins and feathers reigned supreme. RKO was determined to rebrand her image, which was often described as “too masculine” or “too rough” to be cast as a leading lady. Director, George Stevens, who worked with Hepburn in Alice Adams, told biographer, Charles Hingham that, “she always thought that to play a love scene with man involved standing up straight and talking to him strong, eye to eye.”

After the premiere of her first film, A Bill of Divorcement, viewers were somewhat skeptical. The film’s director, George Cukor, remarked “the audience had never seen a girl like that—she seemed to bark at them. She didn’t play for sympathy at all.” But Hepburn approached her career the same way she approached dressing; with a no-nonsense, I’m going to do whatever the fuck I want kind of attitude because, “If you always do what interests you at least one person is pleased,” she once noted. 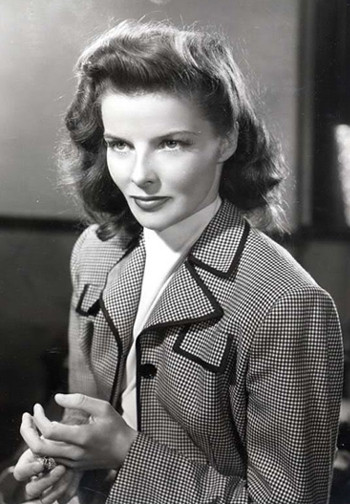 Wearing a checkered, menswear-inspired blazer in a publicity still for Woman of the Year, 1942

As part of a generation of post-suffrage women, Hepburn’s on-screen persona connected with that spirit of modernism and independence. But, women’s fashion had yet to follow. The decade’s fixation for Freudian parallels alluded to a woman’s desire to wear pants as “penis envy,” a sure mark of being a lesbian. Clothing back then was especially tied to one’s gender and pants were feared to reflect a perversity in women. Women could be and were arrested for wearing pants in public and charged with “masquerading as men.” 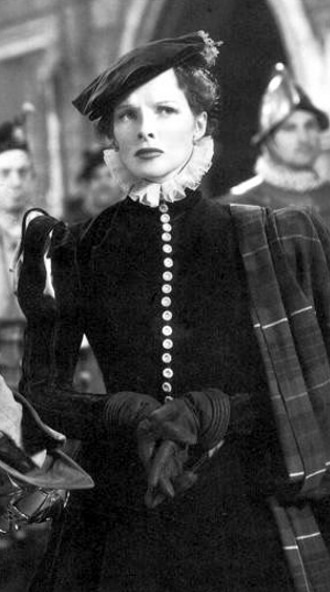 Publicity still for Mary of Scotland, 1936

All the while, Hepburn was inventing the original athleisure aesthetic. She favored menswear-inspired, collared shirts, blazers, loafers, simple makeup and of course trousers. In a 1981 interview, Hepburn told Barbara Walters, “I put on pants 50 years ago and declared a sort of middle road.” She reportedly owned over 30 custom-made tan slacks. 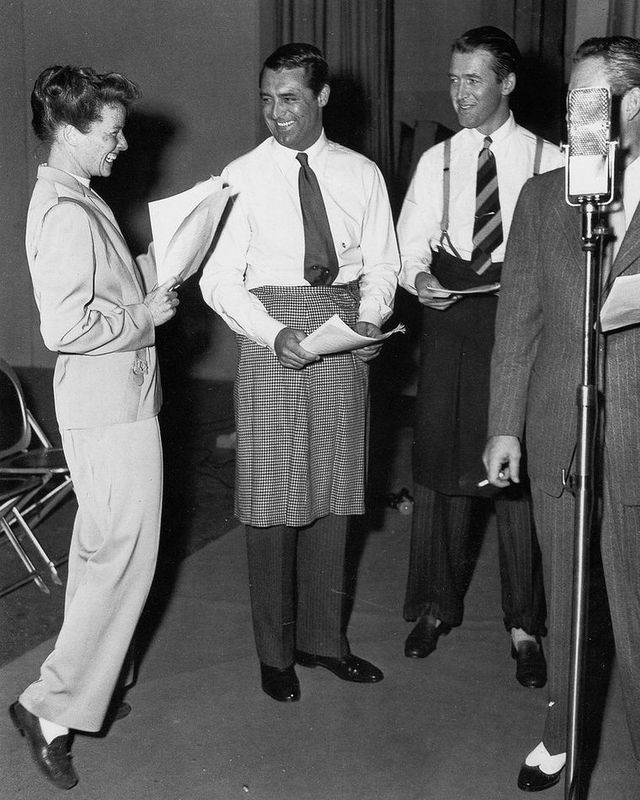 Wearing her trademark slacks and loafers with Cary Grant & James Stewart in a performance of The Philadelphia Story for the Victory Theater radio program in 1942.

While working for RKO, Hepburn wore jeans to the studio. In an effort to persuade her to wear a skirt, someone confiscated the jeans from her dressing room, while she was on set. Her response to this violation of privacy? She came back to set wearing just her underwear and refused to cover up until her jeans were returned. In 1951, when someone dared to tell her that she couldn’t wear trousers in the lobby at Claridge’s Hotel in London, she opted for the staff entrance instead.

Hepburn was decidedly uninterested in playing the Hollywood publicity game and kept her focus on acting. She wouldn’t pose for pictures or give interviews and even did all of her own stunts (apparently the stunt-double never stood up straight enough). Hepburn was very involved in all aspects of her performances, including the costumes. 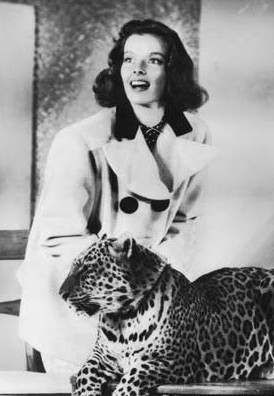 In a boxy trench for a publicity still for Bringing Up Baby, 1938

Legendary costume designer, Edith Head, once said, “One does not design for Miss Hepburn. One designs with her. She’s a real professional, and she has very definite feelings about what things are right for her, whether it has to do with costumes, scripts, or her entire lifestyle.” When preparing for a role, she gave designers detailed notes about her ideas for colors and fabrics. She wanted clothes that allowed her to move freely on-screen and she knew how essential costumes were in helping her define a role’s character. 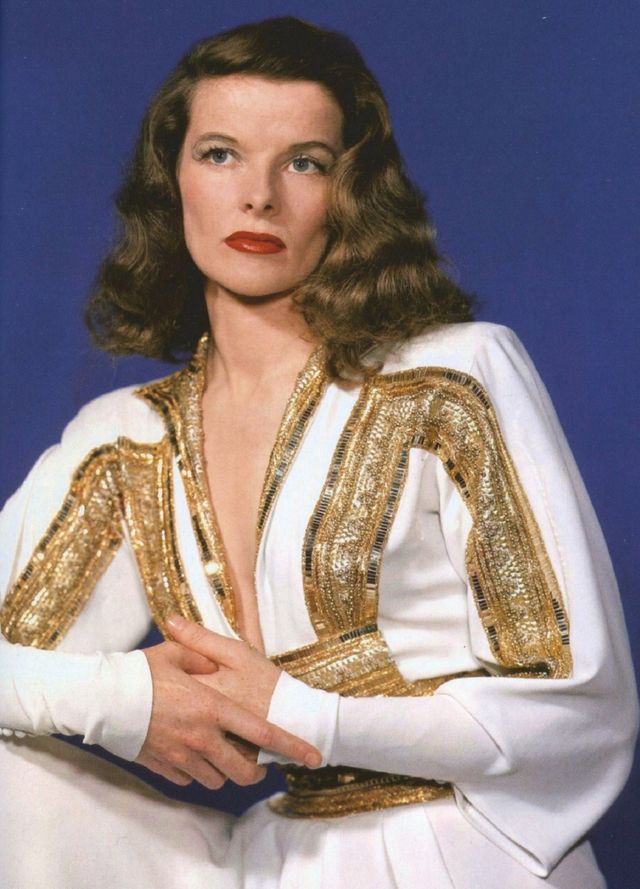 A close working relationship with costume designers gave her the autonomy she desired over her public image both on and off-screen. When Paris was occupied with WWII, its status as the world’s fashion capital took a back seat. Hollywood designers compensated by presenting a specific American look in films. 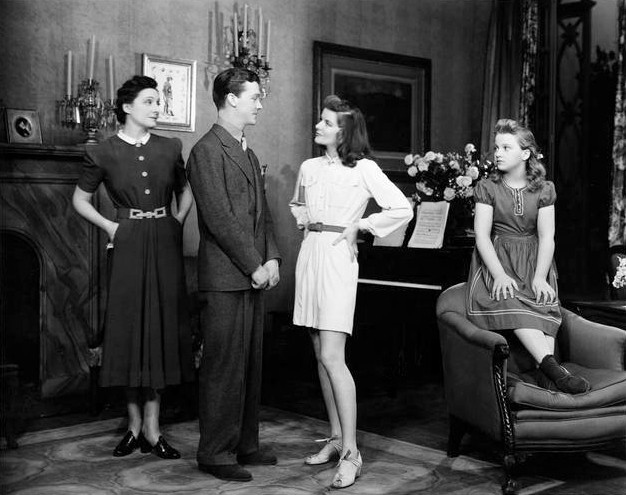 Wearing an oyster-beige romper or "playsuit" in The Philadelphia Story, 1940 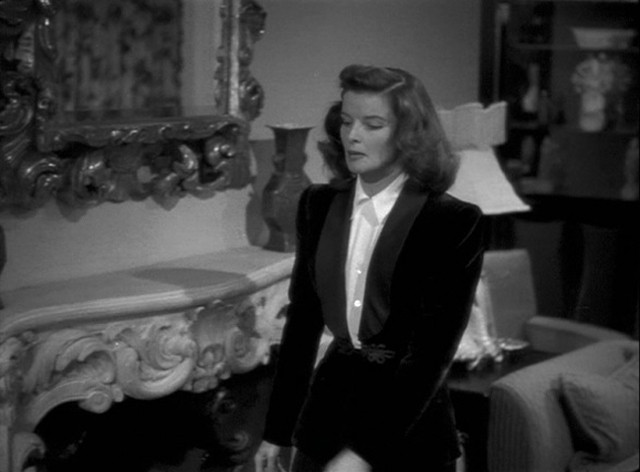 In a velvet tuxedo jacket for Woman of the Year, 1942

However, Hepburn’s confidence and strength in her convictions rendered a different, more modern kind of glamour, where independence is essential and men are optional. In that 1981 Barbara Walters interview, Hepburn declared, “I’ve just done what I damn well wanted to and I made enough money to support myself, and I ain’t afraid of being alone.” The allure and glamour of Katharine Hepburn lives in this attitude of self-reliance and disregard for external validation. 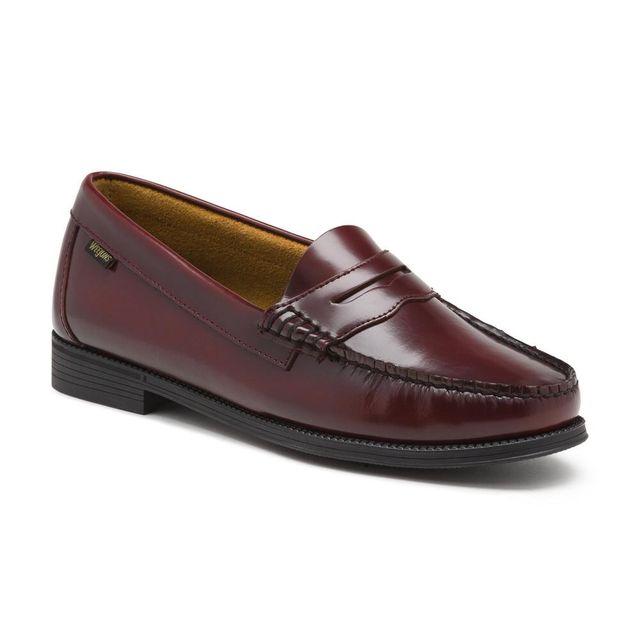 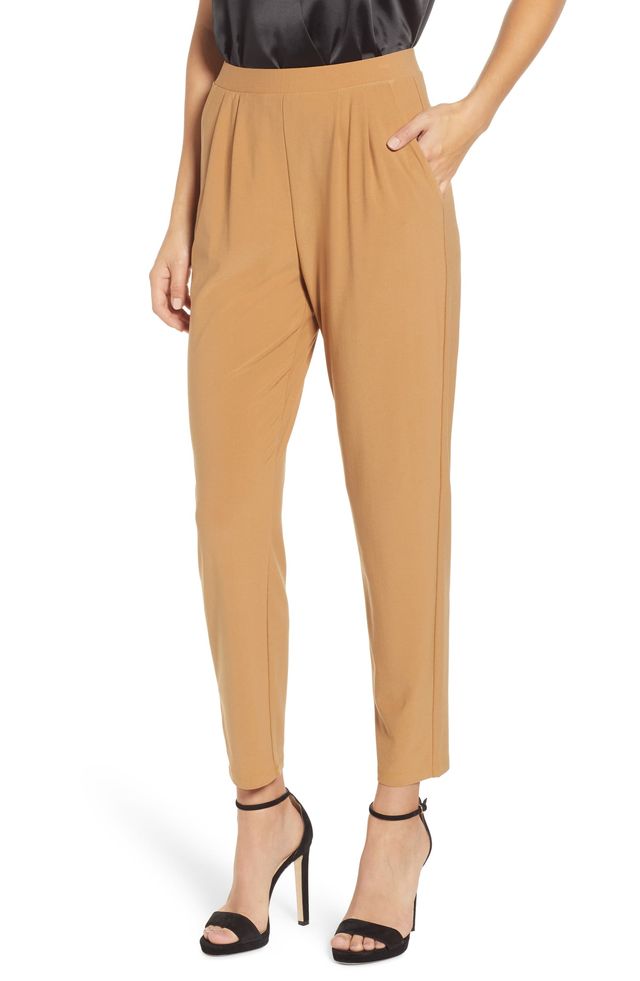 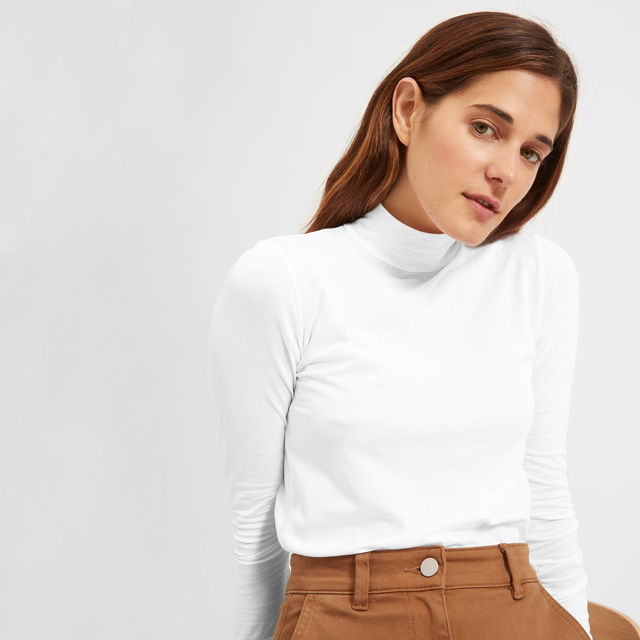 The Pima Stretch Turtleneck in White, $32, by Everlane 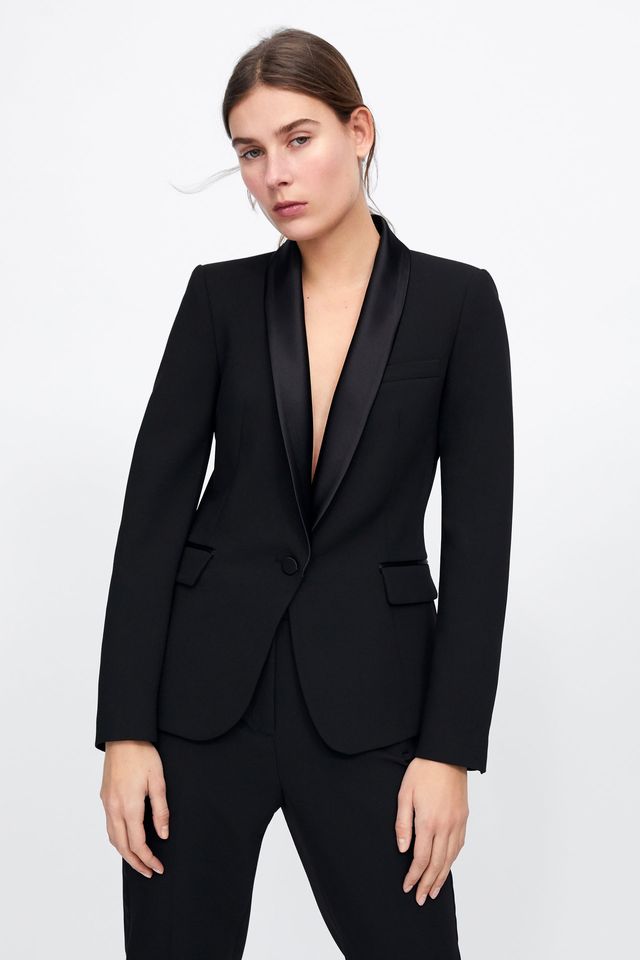 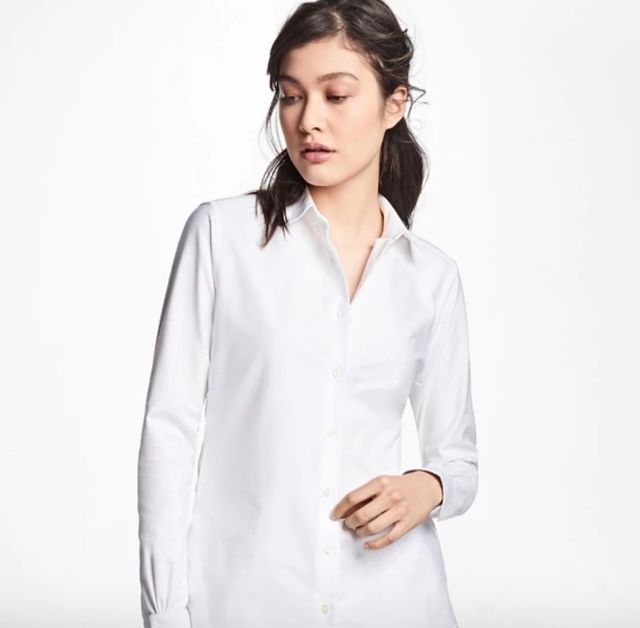 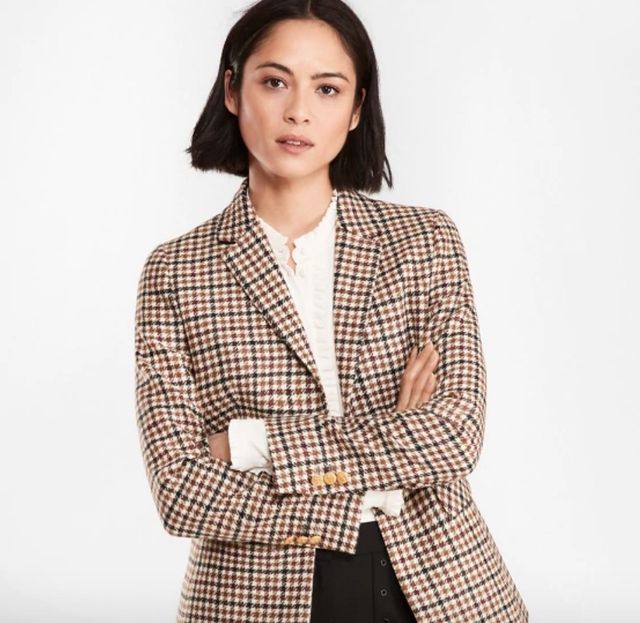 Look Inside The Barbizon Hotel For Women, Where Sylvia Plath And Joan Didion Lived

Tags: Katharine Hepburn , Hollywood , 1930s , 1940s , trousers , fashion , style , style icon , feminist
Support Feminist Media! During these troubling political times, independent feminist media is more vital than ever. If our bold, uncensored reporting on women’s issues is important to you, please consider making a donation of $5, $25, $50, or whatever you can afford, to protect and sustain BUST.com. Thanks so much—we can’t spell BUST without U.