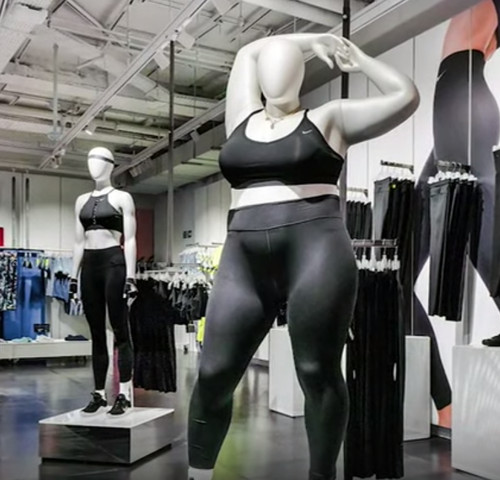 With the grand opening of its “women’s floor,” Nike’s Oxford Street, London location unveiled parasport and plus-size mannequins on June 5. These additions come as part of a growing string of initiatives launched by the brand, from the “Dream Crazier” and “Dream Further” ad campaigns targeted at female athletes to the selection of former NFL-player and racial justice advocate Colin Kaepernick as the company’s face, promoting diversity and inclusivity.

Nike joins stores such as Nordstrom and Old Navy in featuring mannequins of “real-life” proportions. A “normal” mannequin, according to The Guardian, towers at 6 feet tall with a 24-inch waist—maybe just a tad different from the average U.S. woman, who is 5’ 4” with a waist of nearly 39-inches.

A 2017 study published in the Journal of Eating Disorders concluded that the “body size of mannequins used to advertise female fashion is unrealistic and would be considered medically unhealthy in humans.” The survey of national retail chains in two British cities revealed “100% of female mannequins represented an underweight body size.”

Topshop released a statement in 2015, according to The Guardian, claiming that: “As the mannequins are solid fibreglass, their form needs to be of certain dimensions to allow clothing to be put on and removed easily; this is therefore not meant to be a representation of the average female body.”

Nonetheless, over the past couple years, multiple retailers have come under fire for using mannequins with markedly emaciated frames. Topshop stopped ordering mannequins of hyper-thin proportions following criticism in 2014, though pictures of stick-skinny mannequins resurfaced in 2017, newly eliciting public censure. Primark recalled mannequins with ribs sculpted into prominence in 2014 due to intense backlash. Maybe the gaunt dimensions of mannequin frames are necessary as a result of mechanical constraints, but ribs send a pretty clear message.

Deviating so far from the rail-thin norm propagated by the fashion industry, Nike’s introduction of plus-size mannequins has both received significant support—and predictable backlash.

The most glaringly antagonistic response is perhaps the now-viral article published by Tanya Gold for The Telegraph titled “Obese mannequins are selling women a dangerous lie.” In the piece, Gold argues that the inclusion of plus-sized mannequins creates a hazardous acceptance of heavier women in society, which would ultimately encourage the development of a body-type she associates with detrimental health effects. In reference to the mannequin, Gold writes: “She is, in every measure, obese, and she is not readying herself for a run in her shiny Nike gear. She cannot run. She is, more likely, pre-diabetic and on her way to a hip replacement.”

Needless to say, a number of plus-sized women and athletes have responded with posts detailing their enviable fitness accomplishments. “On her way to a hip replacement?” Try just ran a fucking marathon.

Though Gold’s article veers clearly into hateful, unproductive territory—somehow claiming that plus-size women are unable to exercise and should be shamed for their weight—I could not help but agree with her argument to the extent that no matter what body type is molded into the fiberglass, women will seek to emulate the shape, otherwise facing disappointment when what they’re trying on just doesn’t sit right. And whether this is extreme skinniness, extreme fatness, or anything in the middle, the establishment of an “ideal” shape inevitably makes countless women feel that their bodies are somehow wrong or less than. Whether this motivates the development of eating disorders or the desire to have a body that is fundamentally different from one’s own—that’s when it gets unhealthy.

Every individual has a unique build and wellness is not a one size fits all type of thing. But that’s not the point. Rather than worrying about which mannequins are the “healthiest” or show the “most ideal body shapes,” brands should be putting out mannequins that show women as they are, not how they think they should be. Not every person who comes into a store is a paragon of physical health, but they still need clothes.

So no, plus-size mannequins should not be pulled for promoting an “unhealthy” body type, and nor should the extremely thin mannequins. The trick is filling in the space between and around them without judgement, throwing away this preoccupation with what women “should” look like. Store owners—especially those in wealthy chains that can afford so—should do their utmost to buy mannequins representing as many body types as possible. Keep the slender mannequins, the “overweight” ones, but also mix in petite, curvy ones, tall, plus-size ones, top-heavy mannequins, bottom-heavy mannequins, long legs, short legs, big tummy, small tummy. The more body diversity is represented, the more the illusion of an ideal body is shattered. A few plus-size mannequins at Nike are only the beginning.

According to Refinery 29, a Kent University study has shown that women may actually be more inclined to purchase clothing if it is presented on a body that resembles their own. Take American Eagle’s lingerie offshoot Aerie. Following a 2014 decision to stop retouching photos and launch #Aeriereal, a campaign wholly focused on promoting body-positivity, the brand has built a reputation for promoting female empowerment and inclusivity. In 2018, according to Business Insider, Aerie reported “a record-high 38% increase in same-store sales for the first quarter of 2018.” On the other hand, competing lingerie brand Victoria’s Secret, notorious for its invariably thin, toned, and airbrushed “angels,” racked in “a more modest 1% increase in same-store sales growth for the first quarter of 2018, following negative growth in the previous quarter.”

Women are tired of being told by an entire industry (that, by the way, is based entirely on flattering thin, tall, flat-chested women) that their bodies aren’t right. We want to see how real women—who can still include the stick-thin model size, but must feature that build among a diverse spectrum of body types—look in the clothes. Aerie gets it. Nike is starting to get it. And if our voices aren’t being heard by retailers who continue to put their clothes on women of one build and one build only, we’ll say it with our dollars and then they’ll sure as hell listen.

Inside The "Body Neutrality" Movement

In Celebration Of Cellulite, Scars, And Other Seeming Imperfections