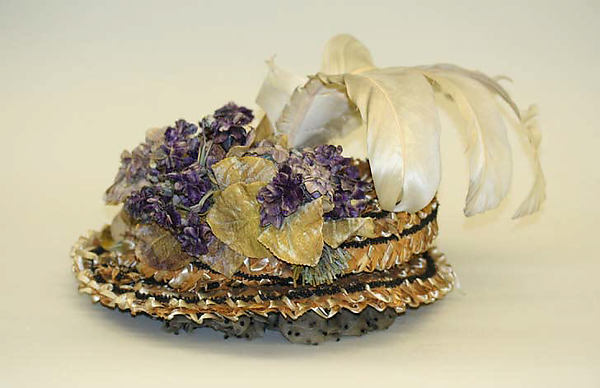 In the nineteenth century, Easter Sunday was an occasion for ladies of all classes to don their most fashionable bonnets.  Some of these bonnets were specially bought for the holiday. Others were old bonnets made up with new trimmings. In either circumstance, Easter bonnets were as essential to celebrating Easter as were eggs and bunnies.  An 1889 edition of the Ladies Home Journal even went so far as to declare that it was “an accepted fact that every woman who can buy or make a dainty bonnet for Easter-day must wear it.”

**Author’s Note:  You can read more about the Victorian Easter Bunny HERE.

Though worn on a Christian holiday, Easter bonnets had no particular affiliation with religion.  As an 1886 edition of the Globe explains:

“An Easter bonnet, notwithstanding its religious savour, is merely an incident in fashion, and follows no ecclesiastical lines.  It is not shaped like a cowl, or pointed like a mitre. In this year of grace it will literally be in the height of the present mode, and a very elevated height that is.” 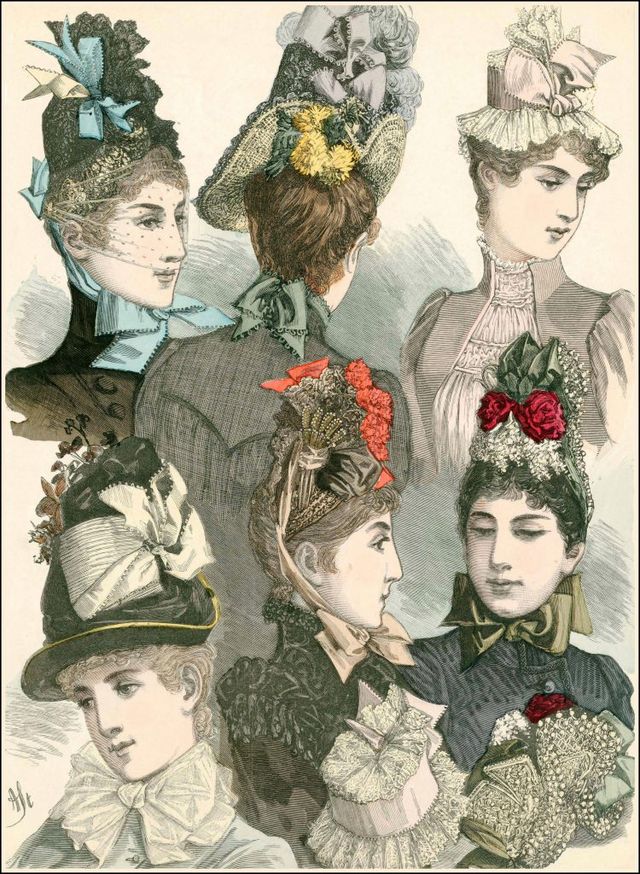 Nevertheless, the Globe states that “this, the season of rejoicing through all Christendom, is emphasised by a woman in a bonnet” and that “on Easter Sunday a new bonnet is de reigueur.”

“There are large hats and small ones, though the tendency, as is usual in summer time, is to large hats. There are tiny bonnets, and those a little larger. There are bonnets that affect an air of primness, and there are those that are really frivolous looking.”

Many Easter bonnets were made of straw—a particularly suitable material for the spring and summer months.  These bonnets could be simply trimmed with a plain silk ribbon and a bunch of wildflowers. They could also be trimmed quite elaborately and expensively.  For 1889, the Ladies Home Journal states that popular Easter bonnet trimmings included:

“…flowers and feathers, gold and silver braid, gold, black and white laces, beautiful tips, stately aigrettes, and everything in the way of rippling ribbons that can possibly be imagined.” 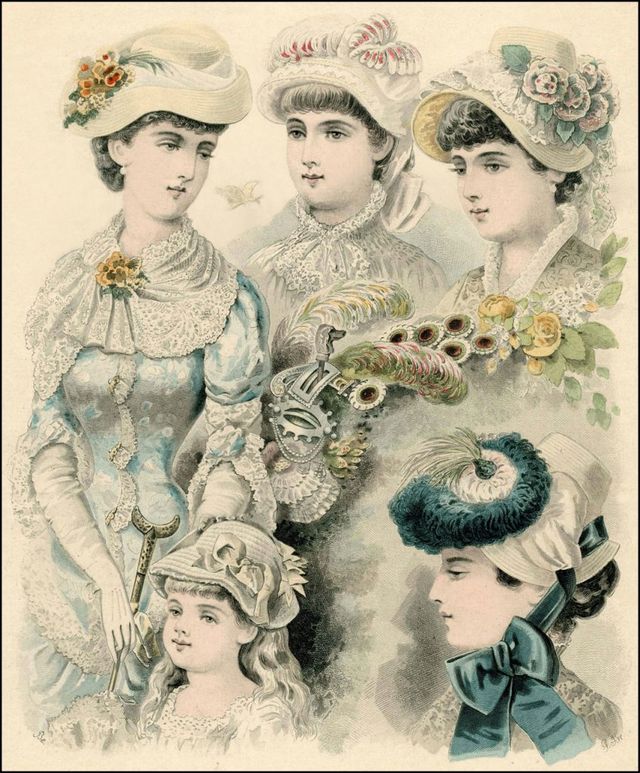 Gold braid was one of the most fashionable Easter bonnet trimmings of 1889.  The Ladies Home Journal reports:

“On very simple bonnets of rough straw it is by no means uncommon to see a braid finish of gold, and no bonnet is counted too plain to have a glint of it, and none too elaborate to be able to go without it.”

The Ladies Home Journal goes on to list the popular “millinery colors” of 1889 which were “especially noted on Easter bonnets.”  These included white, yellow, black, gold, and “all the heliotrope shades.” Gold was a particularly stylish Easter color and, according to the Ladies Home Journal, “wherever a thread of it can be run, a piping of it be put, or even a very broad gold ribbon arranged in knots, it is seen.”

One style of Easter bonnet for 1889 was called the “Lily Hat.”  The Ladies Home Journal describes it as a bonnet “suited to the woman who has ceased to call herself a girl, but who very properly does not intend to think of being old until she has seen more than fifty summers go by.”  The complete description reads as follows:

The bonnet itself is of a coarse yellow straw, and is bent in front, as shown, allowing a little ruching of lace to show from under it, while its very edge is about all the outline. At the back is a monture of purple flowers, but instead of standing up, or turning forward, this comes down and rests on the hair, as did the fillets of last winter. Just in front of the mass of flowers are loops of wide lavender gros-grain ribbon, and lavender gros-grain ties are looped under the chin.” 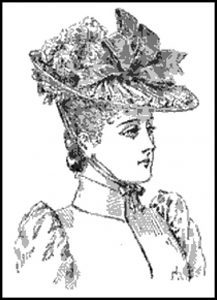 By the end of the nineteenth century, some magazines were reporting that the popularity of the Easter bonnet had come to an end.  An article in the 1896 edition of the Illustrated American declared that “the passing of the Easter bonnet is inevitable. It’s doom has been spoken, its fate sealed—in short, it no longer exists.”  The same article goes on to state that:

Women of fashion have decreed that it is ‘bad form’ to wear new and gorgeous apparel on Easter Sunday in the bourgeois manner of past years, irrespective of the appropriateness of the season or the occasion…The day for women to appear in gaudy clothes, topped by summery hats, on a cold, blustering day of early spring ‘because it is Easter,’ and their toilets have been created for the dress parade that follows the Easter church service and must be worn, is emphatically a thing of the past and has been for several years now…” 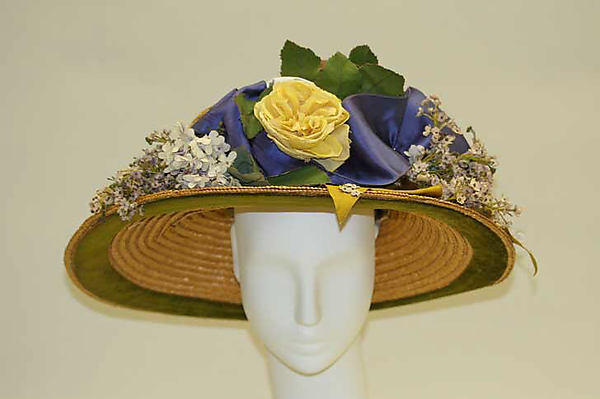 Was this actually the case?  Not entirely. Though the popularity of the Easter bonnet certainly had its ups and downs, it never fell completely from favour.  By the early 20th century, it was back again and—owing to the sheer size of Edwardian hats—bigger and more extravagant than ever. People held Easter bonnet decorating contests and composed Easter bonnet poems and songs.I close this article with one of the latter from a 1911 edition of the Young People’s Home Library.

Little Miss Violet, blooming and sweet
Has her new Easter bonnet all trimmed and complete;
The brim is rich purple with hair-lines of black
It flares at the front and fits close at the back,
There’s a bow-knot of yellow and strings of pea green—
A prettier bonnet has never been seen.

But Miss Violet’s careful, and keeps it well hid
In her underground bandbox, and holds fast the lid;
If Easter is early and March winds are cold,
You’ll not have a glimpse of the purple and gold,
But when Easter comes late, you will see the whole place
Grow bright with Miss Violet’s beauty and grace. 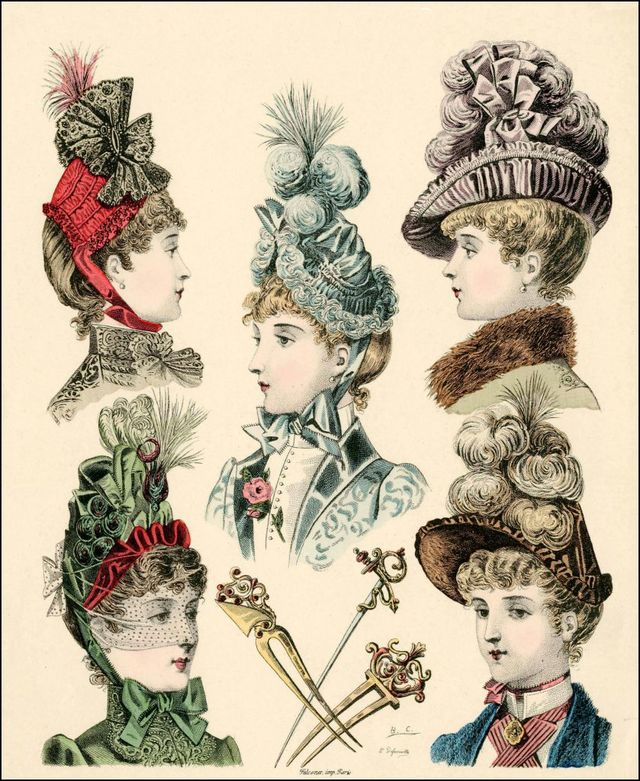 Tags: Mimi Matthews , history , style , Easter , Easter bonnets
Support Feminist Media!
During these troubling political times, independent feminist media is more vital than ever. If our bold, uncensored reporting on women’s issues is important to you, please consider making a donation of $5, $25, $50, or whatever you can afford, to protect and sustain BUST.com.
Thanks so much—we can’t spell BUST without U.