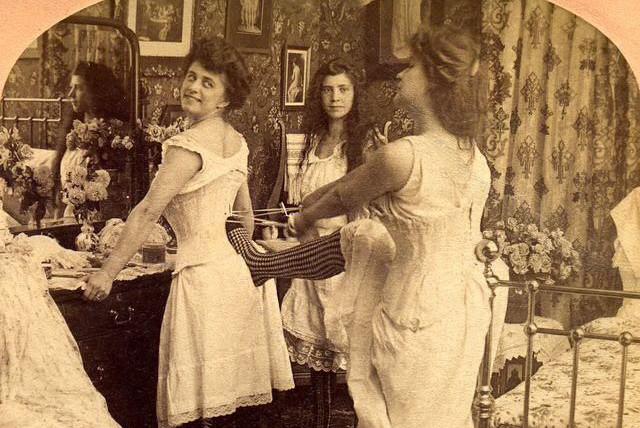 It’s a brave woman who lives her life eternally sans knickers (or panties, for you Americans) but until very recently, it was the norm.

Though men throughout history wore underwear (Charles ll was a fan of a silken boxer short, FYI), it was considered improper for a lady to have anything between her legs.

The Tin Man can’t even face the idea of something between a woman's legs. That is the level of scandal.

The only ladies who dared buck this trend were scandalously rich Italian women in the sixteenth century. But sadly not everyone in history was richer than Midas yet poor in morals; so medieval ladies wore one long underdress (sexy), which later evolved into slips and petticoats.

By the early Victorian era, we started to see “drawers” being worn by women. Queen Victoria was a fan and as with any regal fashion, it soon became synonymous with class…which meant soon enough, everyone was clammering for a pair of drawers.

Within one century, drawers went through a full style evolution from a fashion irregularity to the norm. They went from functional to frilly, sexed up and colourful. 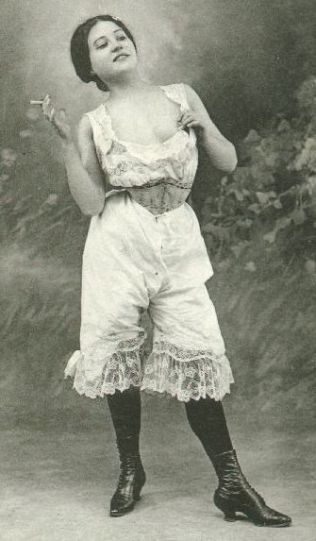 By 1901, only the poorest women weren’t sporting drawers every day. But the evolution didn’t stop there: within the next 20 years drawer hemlines went up and, thus, the knickers we know today were born. In fact, by the 1940s, what was once a fashion novelty was now deemed so essential that during WW2, women opted for wearing home-knitted knickers rather than going commando!

Much like knickers, men sported this underwear trend way before women. Long socks were worn by Vikings, Celtics, and Saxons as a way to combat chilly weather and prevent chafing from shoes (believe me, if you think your new shoes pinch, they haven’t got shit on medieval footwear!)

But it wasn’t all practicality: long, almost stomach-high stockings were a sign of fashion and nobility for men at Tudor Court. One lover of the stocking was Henry Vlll, who was known to proudly comment on the attractiveness of his calves. 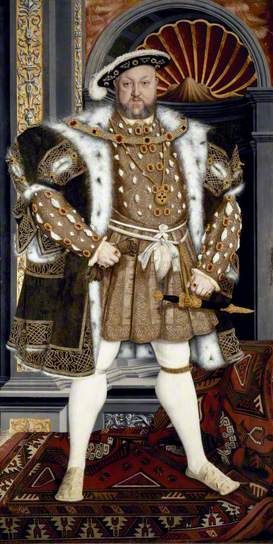 Those calves...I can hardly contain myself!

In this era women also wore stockings, but theirs stopped at the knee. Elizabeth l was a massive fan of silk stockings worn in as many bright colours as possible! People who weren’t queen obvs couldn’t afford this fancy, expensive, dyed silk goodness, so most just made do with plain old wool stockings.

Now, I’ll be blunt, stockings-wise things stayed pretty much the same for the next few centuries…so let’s fast forward to the 1930s! By this era, hemlines in general were MUCH higher. And with their legs now on show and open to the elements, women needed a strong stocking more than ever.

Sadly, they had silk stockings, which:

But then, some beautiful bastard invented nylons. 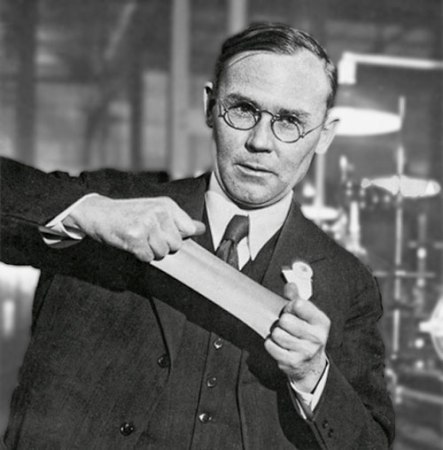 This bastard, in fact. Meet Wallace Carothers, inventor of nylon, stealer of hearts.

Within 2 days of hitting New York department stores in 1940, nylons had completely sold out, and this phenomenon wasn’t limited to NYC, with women across America snapping up the incredible new invention. Finally, women were able to strut their stuff without fear of ladders!

And then Pearl Harbor happened…

Thanks to the war, nylons were rationed in 1942, with the material only to be used to help the US’s defense.

Women resorted to staining their legs for the illusion of stockings, with canny beauty brands selling liquid stockings (AKA, shit fake tans). When the war was over in 1945, the first thought in women’s minds was celebration, quickly followed by:

“OH MY GOD I NEED TO GET ME SOME NYLONS!”

Almost immediately, nylon riots spread across America, as women stormed department stores in the name of underwear. In Pittsburgh over 40,000 people descended upon one store, desperate to get their hands on 1 of just 13,000 nylons.

Okay, so we have the basics down, knickers and tights – but now we need to get us some body!

But how does one achieve that hourglass shape that history has persisted in telling us is IT? Well first you go in, and then you go…out… 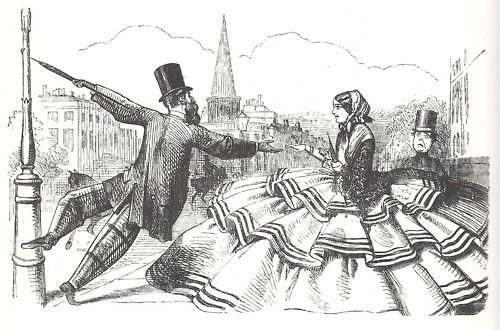 I’ll be brief. Here’s all you need to know:

Crinolines were a fashion staple in the 1800s, beloved for their ability to create an hourglass shape. Sadly, there was one big downside, you see:

CRINOLINES HATE YOU AND WANT YOU TO DIE.

Seriously, no other underwear has a thirst for blood quite like these voluminous contraptions of death. 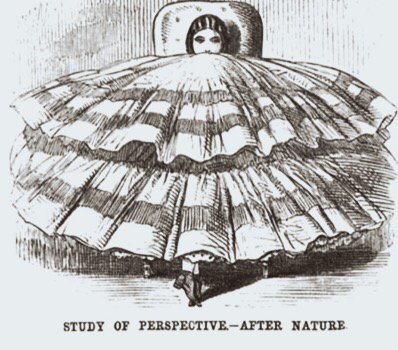 In 1864 one London doctor estimated that 2,500 women had died as a direct result of wearing crinolines. You see, the garment had a habit of catching onto things; after all, it was bloody enormous. Sadly, the thing crinolines mainly caught onto was fire.

That’s right, crinolines led to thousands of women being burned alive in their dresses.

But the danger didn’t stop there. As said earlier, crinolines were out for blood!

There are accounts of women’s crinolines getting caught on moving carts and carriages, resulting in the unfortunate lady being pulled down the street after it.

I’ll leave you with this: one summer’s day in Herefordshire, one lady was out enjoying the sun. When she went to sit on the grass, part of her crinoline’s steel supports snapped – sending a jagged piece of metal into a very very uncomfortable place and inflicting severe internal injuries.

Nothing is EVER worth this.

Crinolines weren’t the only underthings causing grievous bodily harm. Corsets were also more than happy to fuck women’s bodies up, both internally and externally! 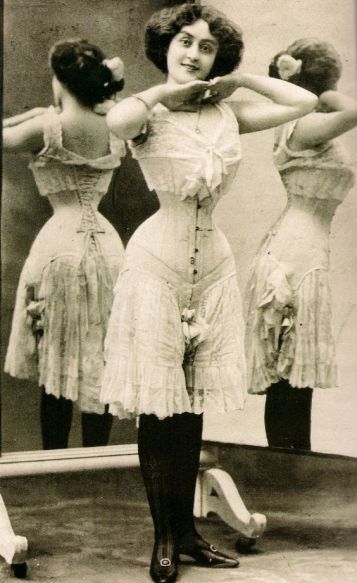 You know that she is in so much pain...

The great-great-great-grandmother of the corset we know today is the cote, a tightly-laced bodice worn by medieval women to acquire an hourglass silhouette (gotta get them child birthing hips!).

Around the 16th century, people started using stiffening materials like wood, whalebone, and steel to create a much more tighter waist than would be possible with just lacing. And thus, the corset was born!

The corset’s design was not just to create a waspish waist, but also to lift the boobs, emphasis the hips, and create a rod-straight posture.

For the next few centuries women would be squidged, pulled, and generally forced by any means into tighter and tighter corsets. With the Victorians desperate to make the average 28-inch waist a frankly terrifying 16 inches.

Prince is not here for your mangled ribs.

It’s the Victorian corset that remains the most iconic. In this era the empire waists of earlier periods were dropped and, with more emphasis now on the natural waistline, the corset really came into its organ-crushing stride.

On that note, let’s do some myth-busting:

CORSETS WILL NOT KILL YOU.

I know, they should. Corsets literally squeeze your organs and shuffles them about…but it turns out that bodies are pretty hardy and the typical tightly-laced corsets worn by Victorian women were not lethal. Uncomfy? Yes. Deadly? No.

That’s not to say I’m endorsing wearing something that mangles your skeleton, tosses your organs around, and is generally the most uncomfortable thing ever. I’m just saying that it won’t kill you. Which is good, because everyone in Victorian England wore corsets. Even pregnancy couldn’t stop the corset! 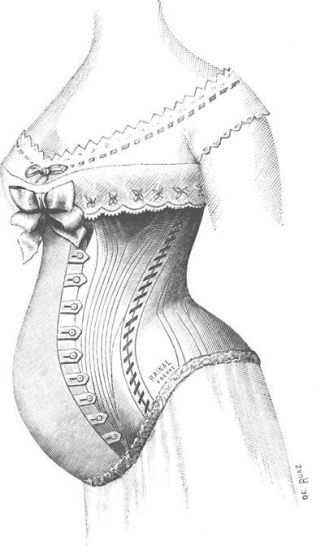 The Edwardian era sought to rectify some of corsetry’s comfort issues with the invention on the S bend corset (because everyone wants to wear an S bend…).

The S bend was designed to lessen the pressures on the stomach, whilst still nipping in the waist, pushing the boobs and giving a nice posture.

This was the result:

Soon, corsets were packed full of extra enhancements to help women achieve the monumental feats that Edwardian fashion demanded from their bodies.

My personal favorite of these is the lemon cup, sort of a mix between chicken fillets and a push up bra. These small cotton cups were full of horse hair with a coiled spring attached to whalebone hidden inside. When all these elements combined the wearers breasts were buoyantly pushed up and out.

Arguably, when you’re attaching springs to your tits, things have gone too far.

Edwardian fashion agreed. As designs that worked with the bodies natural curves came in, corsets starting to go out. Making room for underwear that allowed women to actually do shit, like dance, walk, and move without creaking.

Here's What Fashionable Men Dressed Like In The 1800s