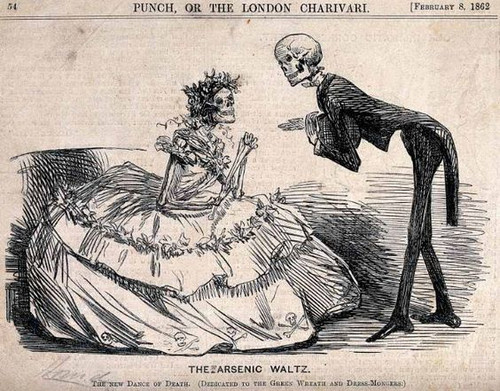 We all know that history is littered with dresses that wanted nothing more than to kill their wearers (shoutout to fire-loving crinolines and organ-squishing corsets!), but it wasn’t just dress engineering that could led to (a v. fashionable) early grave; the color of your dress could also lead to a veeeery nasty end! I present to you Scheele’s Green, a hue with a mission to kill every Victorian it could.

Arsenic was an everyday item in Victorian England. It was just one of those things you had in your house, like soap, cosmetics, even playing cards. (Actually, arsenic was used to make all of these…)

The industrial revolution brought a boom in the arsenic industry as ways to manufacture the element became easier. Due to this, the Victorians started to use arsenic in literally everything! They used it in furnishings, sprayed it on vegetables and meat… even coated toys in it. It sounds super deadly…and it was…BUT all this arsenic was in pretty small doses; you’d literally have had to lick all the toys in London to die from it (still don’t try it at home, though). 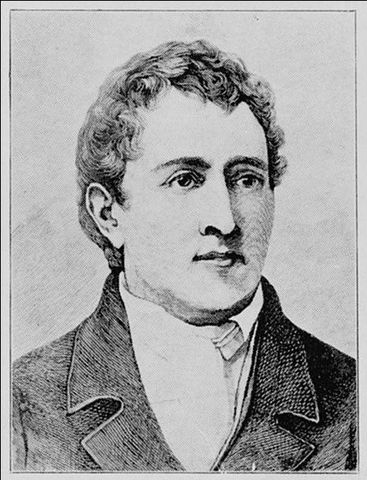 Scheele wanted to create a long lasting, bold green hue. So, using copper arsenite as the key ingredient, he created what he called "Scheele’s Green," also known as Paris Green (the actual full name is CuHAsO3, for the science nerds out there).

Now, you might think that having a green pigment with such a high arsenic percentage would put people off…but you guys...it made shit look sooo green. Like soooooooo green though!!!

And so Victorians popped Scheele's Green in everything they could think of. Wallpaper? Yeah, shove some arsenic on that bad boy! Clothes? Yes, that totes needs a shade of death! Sweets? Yes…I’m sorry to say that some cavalier confectioners dyed their sweets with Scheele's Green, which did result in a tiny bit of child death.

Er yeah, sorry to have bought in child death so early... but it's kinda a death post (via giphy)

Now, having arsenic in wallpaper is bad enough, so imagine how bad wearing arsenic is for one's health!

At the time it was estimated that one ball gown made using Scheele's Green would carry an estimated 900 grams of arsenic.

It takes 5 grams to kill an adult.

THAT IS A SHIT TON OF DEATH TO BE DANCING AROUND IN.

Luckily for the ladies wearing these dresses, they were covered in layers of petticoats, linings, corsets, and crinolines, so they didn’t actually come into much contact with the deadly fabric. The same cannot be said for the poor sods making the dresses. 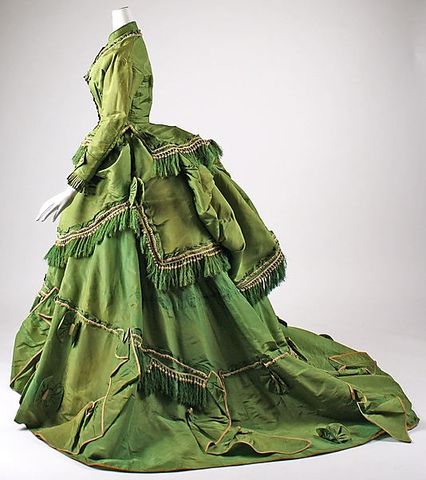 Scheele Green, corset, and a bustle, that's like the trifecta of deadly dress!!!

In 1861, a 19-year-old paper flower maker named Matilda Scheurer started convulsing and vomiting green liquid. The whites of her eyes turned green and so did her fingernails.

Matilda’s job was to brush powdered green pigment onto fake flowers, which were then sold to adorn wealthy ladies hats and dresses. As you’ve probably guessed, the green powder was a type of Scheele’s Green and obviously contained all of the arsenic.

After inhaling high levels of arsenic every day of her working life, Matilda died a slow and very painful death. She wasn’t the only one. French physician Ange-Gabriel-Maxime Vernois wrote that after visiting a fake flower factory (similar to the one Matilda worked in), the daily contact with arsenic wrought havoc on the bodies of the workers, with the arsenic literally eating away at their flesh.

I repeat: eating away at their flesh!! (via giphy)

This, combined with the public becoming more aware of the dangers of products based heavily in arsenic, caused the use of Scheele’s Green and other arsenic-based hues to fall sharply out of fashion – because nobody wants to die, no matter how haute couture the dress.

You heard it here first, folks!!! (via giphy)

This was interesting! Where do I find out more? Well if you enjoyed finding out how fashion killed Victorians, you’ll love finding out how tons of other stuff did too!! Suzannah Lipscomb’s series on hidden killers is a great watch, covering several eras in history. It’s online and you can also buy episodes to watch on Amazon.

Tags: F Yeah History , history , fashion , deadly fashion , Scheele's Green , arsenic , Victorian , fashion, , history , Victorian
Support Feminist Media!
During these troubling political times, independent feminist media is more vital than ever. If our bold, uncensored reporting on women’s issues is important to you, please consider making a donation of $5, $25, $50, or whatever you can afford, to protect and sustain BUST.com.
Thanks so much—we can’t spell BUST without U.